Image of Futuristic Society in Anthem

A quest means someone tries to find themselves or find knowledge to grow as a person. In the novella Anthem, Ayn Rand writes about a man named Equality. Equality lives in a futuristic society where no one can be an individual or have any knowledge. He started his quest for both individuality and knowledge when he found the tunnel from the unmentionable times. In real life, Harvey Milk is known as the first openly gay elected official in California. He is most influential to many people during the 1970s.

Don't use plagiarized sources. Get your custom essay on
“ Image of Futuristic Society in Anthem ”
Get custom paper
NEW! smart matching with writer

Both Equality and Harvey Milk embarked on a quest, faced obstacles, found solutions and attempted to change their societies.

In the novel, Anthem by Ayn Rand, the main character, Equality is on a quest to search for both knowledge and individualism. This quest could change his society because he can help others think for themselves. First, I think equality realizes he is on a quest when he finds the light bulb in the tunnel.

“We cannot stop now, even though it frightens us that we are alone in our knowledge” (Rand 54). The thing about this moment in the story that starts him on his quest is that he is the only one that knows about this, and he must learn about it on his own. This moment makes him realize he needs to change his society because, no one can think for themselves, and the council will not tell anyone the truth. Next, A major obstacle that he faces is that he must sneak around and steal supplies to use in the tunnel. “we have stolen candles from the home of the street sweepers, we have stolen flints and knives and paper, and we have brought them to this place” (Rand 35).

This quotation represents the obstacle on his quest because he had to steal things to be able to work in the tunnel from the unmentionable times. This obstacle also stands in Equality’s way of changing his society because if he gets caught stealing the council will punish him and he might not be able to share his knowledge with the people. Lastly, the solutions that he used to face his obstacles were that he invented electricity, he met The Golden One and when he ran away from the city. “Only we wished to be away, away from the city and from the air that touches upon the air of the city. So, we walked on, our box in our arms our heart empty” (Rand 76).

The solution helps him overcome his obstacles because if he did not invent things, he would not have knowledge that the council is tricking them. If Equality had not met The Golden One, he would have not learned to love or think as I and not we. When Equality invented things he got closer to the goal of his quest because he gained the knowledge that there are other things than just the thoughts the council puts in their heads. He also gains the idea of individualism by thinking for himself that the council is wrong. Him meeting The Golden One also gets him closer to his goal of individualism because he can love her and think as I not as we. When Equality ran away from the city, he got the chance to start over and go help his friends from the city, by him doing this he could change his society forever. In conclusion, by him finding the light bulb and meeting The Golden One he can find his individualism and change his society.

Harvey Milk went on quest to make a voice for the LGBTQ community and changed his society. Harvey was born on May 22, 1930 in Woodmere, New York. Milk went to the New York State College for Teachers in Albany, New York. After college he served in the U.S Navy during the Korean War but ended up getting kicked out because it was found out that he was gay (Harvey Bernard).

Image of Futuristic Society in Anthem. (2021, Dec 03). Retrieved from https://studymoose.com/image-of-futuristic-society-in-anthem-essay 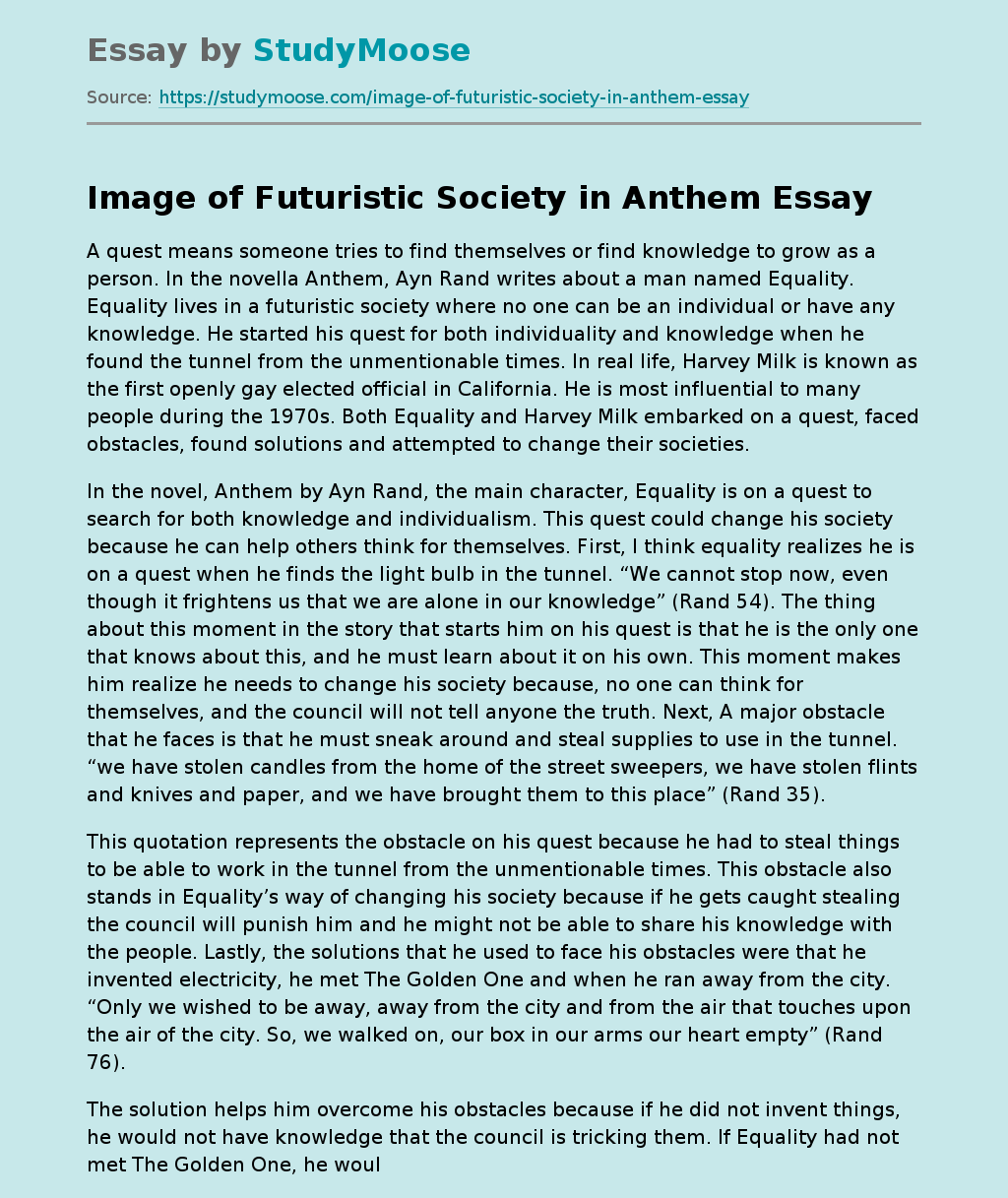