I'm The King of The Castle bt Susan Hill Revision

In ‘I’m the Kings of the Castle’ Susan Hill realized that in order for the book to be a success, the reader must feel sympathetic towards Kingshaw, so that they will believe in the likelihood of his suicide. She arouses the reader’s sympathy through her narrative technique, the role of other characters and many other techniques that will be analyzed in the essay. Her skilful presentation of Kingshaw’s story gives a disturbing insight into the potentially tragic consequences of a child’s experience of cruelty and isolation.

Don't use plagiarized sources. Get your custom essay on
“ I’m The King of The Castle bt Susan Hill Revision ”
Get custom paper
NEW! smart matching with writer

Hill employs narrative technique effectively in creating a sympathy for Kingshaw from the audience. Hill’s control of the third person is effective in exaggerating Kingshaw’s experiences. For example, the pivotal episode where Kingshaw is running away from the crow in the fields is portrayed in a way so as to evoke a sympathy for Kingshaw; “Kingshaw began to run, not caring now, if he trampled the corn, wanting to get away, down into the next field.

” Hill has emphasized the tone in the narrative voice, there is a sense of panic which is brought on by the overuse of commas. The third person narrative voice evoking this sense of panic and highlighting Kingshaw’s frightening experience with the crow is significant ­ showing that Hill has attempted to write sympathetically for Kingshaw.

Within the same scene, Hill has drawn Hooper away, presenting him as some distant evil and ultimately highlighting the protagonist­like character of Hooper. “He looked up. Hooper stood in the window of his bedroom.

He watched and watched.” Hill portrays Hooper with more obscurity, In contrast to the vividness that Kingshaw and his actions have been described. Hill describes Kingshaw’s fears and anxieties through recognition of one’s social situation, through the use of the reader’s emotional response and by the fact that Kingshaw was shown sensitive as soon as he received the message when he arrived at Warings. Hill uses Hooper’s eagerness for Hooper to know about Kingshaw’s background of property and living standards to make Kingshaw seem like a sensitive character. ‘You were only tenants, then.’ Here Hill’s decision of making Hooper making quick conclusions about Kingshaw creates a notion of bullying and it also makes Hooper sound like the more powerful character. Also, ‘only’ reinforces the difference in social and economical background and also makes Hooper sound spoiled.

This creates a sympathy for Kingshaw and makes the reader understand that he is afraid of Hooper. Hill uses the message that Hooper sends to Kingshaw at his arrival to create an immediate tension but the reader’s predictions of Kingshaw likely going to attack back in some way is contrasted as it is revealed that Kingshaw is a kind and good person. Hill uses the notion of having a father to show his kindness but also how Kingshaw doesn’t dare to hurt Hooper. ”My father’s dead.’ He was angry not hurt. He wanted to put his fists up to hooper, and dared not.’ This reveals that Kingshaw might have been confronted with this question before as well as his want to be able to express this emotion. But the consequence of his father’s death is what makes him embarrassed about his lack of property. ‘Kingshaw flushed brick red.’ This reveals that Kingshaw’s embarrassed about him having to come to someone else’s house. The word

‘brick’ connects to the importance of property and reveals that Kingshaw’s embarrassment has to do with the lack of property. Kingshaw’s relationship with Hooper is a power struggle, shown through the mind games they play with each other. Hooper imposes on Kingshaw that he is the master of the house and so owns property, hence he belongs somewhere, “When my father dies, Hooper said, this house will belong to me, I shall be master. It shall be mine.” Hill continuously repeats the pronoun which emphasizes Hoopers self centred attitude as well as his obsession with being in control of things that happen around him, made evident by his precise manipulation of his action figures and his use of ‘master’ to refer to himself. Throughout the book we see that Kingshaw constantly sees himself as an outsider who does not belong, and with this self­degradation comes a sort of reverence and fear towards Hooper. Hill constantly presents Kingshaw as spatially below Hooper (kneeling or crouching down as Hooper stands above him) as being on a higher spacial level than someone has connotations of being above them in status or of being able to control them.

Kingshaw first realizes the truth of his situation involving Hooper during their trip into Hang Wood, “There seemed to be a churning and boiling inside his head, when Hooper stood in front of him like this, so that he could only flail out savagely in all directions”. Hooper is not any stronger than he is, however he is willing to hurt people to get what he wants and Kingshaw is not­ an aspect of him that Hooper exploits. The use of ‘flail’ is indicative of blows intended to reach their target but never meeting the mark. This is a reflection of Kingshaw’s character, he is capable of harm but he does not have the resolve to follow through, thus missing his mark. The theme loneliness is carried through the whole book. As well as leading one of the characters to suicide, the loneliness remains because Hooper got what he wanted at the end but he is in fact still alone and miserable with the same deterring father and Miss Kingshaw.”She had decided to ignore it, this silly, persistent talk about them not being friends.” (p185) ­ helena kingshaw. This signifies how mrs kingshaw is ignorant.

This made Kingshaw feel like he was taken for granted and was not being heard out. Mrs. Kingshaw’s utter disbelief and lack of interest and unwillingness to relate to her son made him lose faith in humanity “people are no good, then, people can never help me”. She always ignored the hostility between him and Hooper, but subconsciously its Hooper that she sides with and she is blind of Kingshaw’s feelings as there is a lack of parental skills and communication . On the other hand , Mr. Hooper was the reason behind Mrs. Kingshaw’s ignorance and neglect towards poor Kingshaw as she always tried to impress him and give him all her attention. Mr. Hooper and Mrs. Kingshaw’s relationship was a big threat to Kingshaw.However, some of Mr. Hooper’s actions also created an effect on Kingshaw’s misery and suicidal tendencies when he “struck him across the cheek” (slapped him),or even when they both went to London and Kingshaw felt hopeless and ” he knew that there was no more hope for him.

Kingshaw is very traumatized by Hooper, but has no one to tell his problems to, and due to his hopes being destroyed, he feels that suicide is the only answer, the only escape. It is revealed, that by the end of the book Kingshaw is isolated from everyone, even his mother. However, this is not from the start, and sometimes Kingshaw does try to tell his mother, but she won’t listen. “Kingshaw said passionately, ‘I hate him, I’ve told you. I hate Hooper.’ ‘Oh, that is a wicked, wicked way to talk… Whatever can poor Edmund have done to you?’ ” Hill makes Mrs. Kingshaw feel that this attitude is natural to boys, and when boys hate each other, it doesn’t mean anything. This makes the reader feel that Mrs. Kingshaw is blinded by her own happiness to see how much hatred Kingshaw is feeling. Because Kingshaw is annoyed at Hooper, he takes a decision to leave, to go through Hangwood; anywhere but away from Hooper, “He thought, tomorrow, I shall be gone, tomorrow, nothing will matter” Hill makes Kingshaw feel that running away is his best option, better than telling anyone. Again showing how detached Kingshaw is from everyone. Although his first attempt to run away had failed, he still thought that he could soon get away from Hooper.

Now, Kingshaw was hoping that the summer would end quickly, then he would be back at his school. “I want to go back to school.” Hill reveals to us how bad Kingshaw feels living at Warings, by showing that he would prefer to go to school, school of all places, just to get away from Hooper. However, this hope is shattered, as Kingshaw will now be going to Hooper’s school. ” ‘You’re coming to school with me,’ Hooper’s voice went up and down in a sing­song.” Hill uses “sing­song” to give the reader the impression that Hooper is delighted at all this, like he has something planned for Kingshaw. The final hope that Kingshaw has is in the form of Fielding, and that Fielding can really help Kingshaw. “He must look and talk like Fielding, he must be like Fielding.” When you be like someone, that means that you are following in their footsteps; they are your role model. Hill makes Fielding Kingshaw’s role model.

However, because Fielding is not scared of Hooper, he doesn’t understand Kingshaw’s fear; he feels that Kingshaw is just scared for nothing. “Look, you ougn’t to let everybody boss you around so much, Kingshaw, they can’t make you do anything.” Hill makes Fielding feel that Kingshaw can solve the problem by changing himself, showing that for him it is not something that can be classified as an actual fear. Because all his hopes are destroyed, Kingshaw now believes that Hooper cannot be gotten away from and the only solution is to kill himself. “When it had reached up to his thighs, he lay down slowly and put his face full into it and breathed in a long, careful breath.” Hill makes Kingshaw die by drowning, because it shows that Kingshaw could’ve come up at any point in time if he wanted to, but he just didn’t. 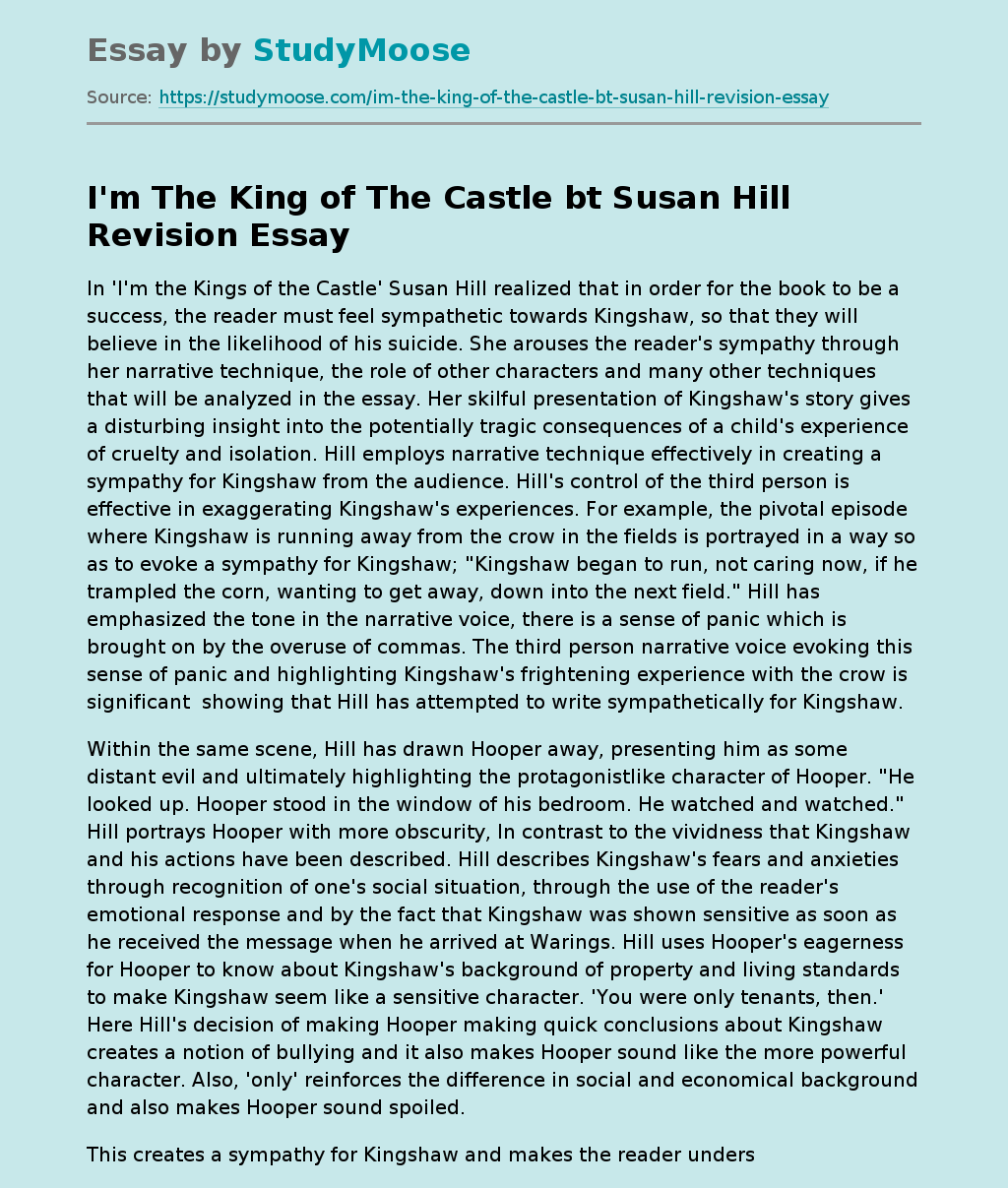