Illegal Immigration and Its Concerns

Nowadays this is a situation that has become very common in several countries with High Human Development Index: Illegal Immigration. It refers to ‘the migration of people into a country in ways that violate the immigration laws of that country, or the remaining in a country of people who no longer have the legal right to remain ‘(Wikipedia). Over many years to this date many are the constraints that countries such as England, France, the United States, Germany, Canada, and others, are facing because of this problem.

Don't use plagiarized sources. Get your custom essay on
“ Illegal Immigration and Its Concerns ”
Get custom paper
NEW! smart matching with writer

Due to their economic situation, high level of technological advancement, high social indicators, quality of life, among other premises, these countries have faced problems with Illegal Immigrants. Due to the large gap between these countries and those countries that find themselves in a very poor socioeconomic-political situation, this movement has increased exponentially and has generated strong waves of demonstration by organizations for and against illegal immigrants.

Immigration has started in the USA over four hundred years ago.

History says that the first immigrants to arrive to USA were the Europeans. They start with the Industrial Revolution that gave rise to manufacturing economy, which made America become the leading power in the world. As we all know, illegal immigration is a big issue of Law Violation in the first world countries. According to Jack Martin (Special Projects Director, Federation for American Immigration Reform – FAIR) on his statement ‘Illegal Immigration and its effects on society and the economy’ he says that “The total fiscal burden from illegal immigration borne by the state’s taxpayers is considerably higher than those ….

If the full costs of administration of justice, e.g., such costs as policing, processing, trials, interpreters, medical expenses and other incarceration costs beyond salaries of the incarceration staff were included, those estimated costs would greatly expand.” He also tells us that the costs borne by the state on the expenses with illegal immigrants, and with medical emergencies and incarceration the estimated cost was $ 285 million dollars per year in 2006, and estimates the rise in cost to $ 812 million dollars per year until 2020.

Although illegal immigrants are a good part of the labor force receiving ‘under the table’ and giving substantial gains to companies employing undocumented immigrants, and there is no undocumented worker’s contributing to programs like Medicare or even Medicaid, with this procedure the state fails to raise millions in taxes causing a hole in the state accounts due to spending billions on illegal immigrants aid programs and support.

Due to the number of visitors entering the United States who do not return to their countries of origin preferring to stay in the country illegally, many embassies in these countries have been making it difficult to assign visas to visit, reducing visas attributed annually. This process has an inversely proportional relation to the attribution of entry visas, reducing the number of visas attributed as citizens from those countries that do not return are increasing.

According to FAIR between 17,000 and 19,000 foreigners are trafficked to the United States every year. These people are deceived with false promises of employment and of a better life. ‘Victims of trafficking are exploited for purposes of commercial sex, including prostitution, stripping, pornography live-sex shows and other acts.’ However, trafficking also takes place in labor exploitation, including domestic servitude, sweatshop factories, agricultural work and more. “- FAIR

Although the United States faces serious problems with illegal immigration, Europe is also facing many problems with this new wave of illegal immigrants moving from several poor countries in Africa. Thousands of illegal immigrants have died trying to reach Europe by land or by sea. And even by sea that in recent years has been the biggest humanitarian disaster, with records of several shipwrecks of small vessels that transport them in inhuman conditions illegal immigrants, who along the journey end up running out of water and food, many dying in the boats, which are then thrown into the sea. This situation has awakened a huge humanitarian crisis along European borders, with some European countries arranging quotas for illegal immigrants to accommodate them. But not everyone is having this luck, and many end up suffering in refugee camps where they are placed.

This movement poses a certain danger to a socially, economically and politically organized society and can increase the risks of increased drug trafficking, clandestine work, prostitution and even trafficking in human beings, and increasing the deportation of illegal immigrants to their home countries. source. Undocumented immigrants are still entitled to medical care, immunizations, humanitarian aid and basic education. Much has been done to combat illegal immigration in the United States, from strengthening borders, creating stricter anti-immigration laws. Even with all this concern in dealing with Illegal Immigration, there is still a great influx of Illegal Immigrants seeking the desired ‘American Dream’. The fight against Illegal Immigration will be a constant struggle and it does not prove to have an end in sight.

Illegal Immigration and Its Concerns. (2021, Apr 08). Retrieved from https://studymoose.com/illegal-immigration-and-its-concerns-essay 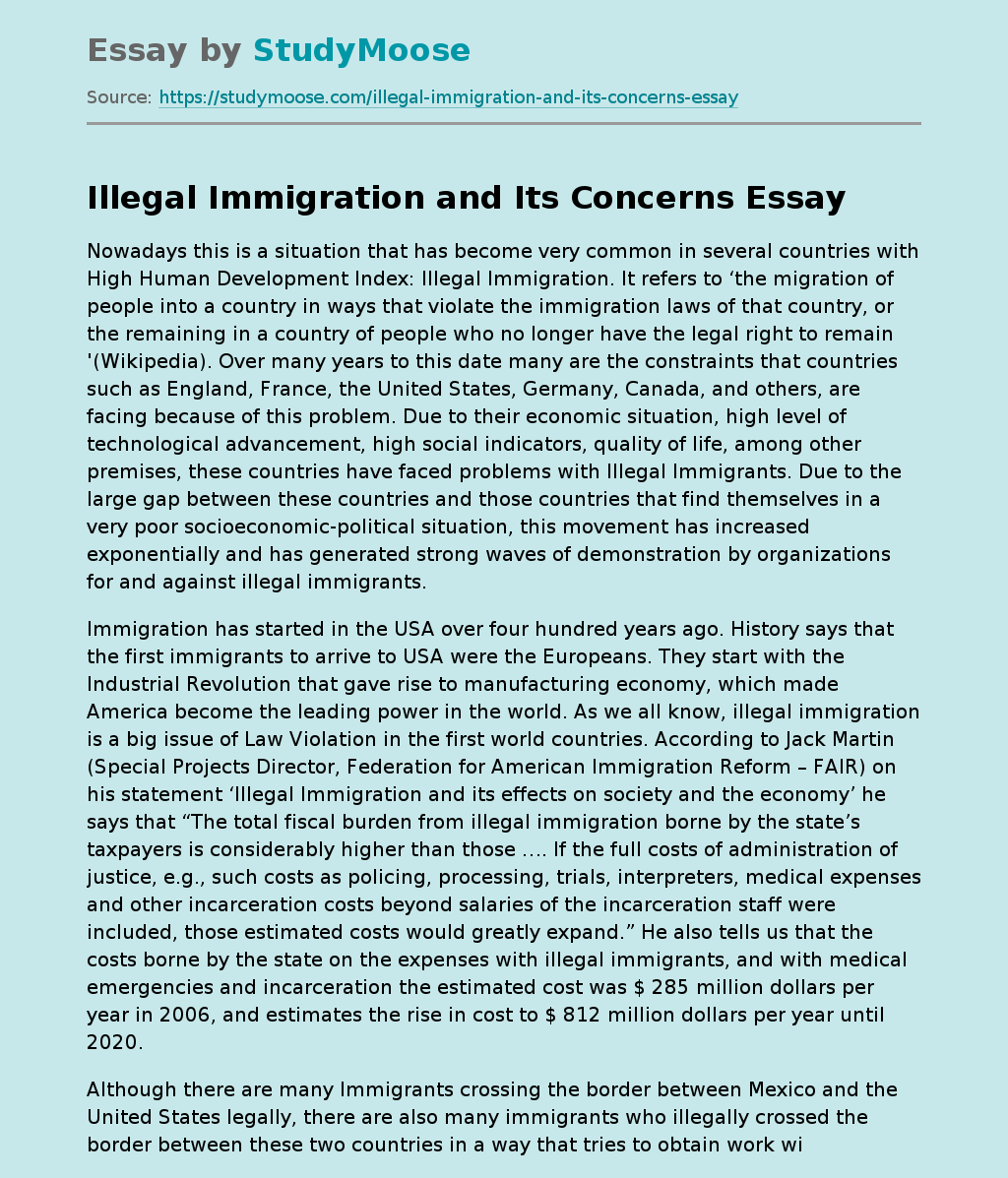