IKEA is a Swedish company producing home furnishing products at low prices. The company was founded in 1943 by Ingvar Kamprad and kept growing tremendously from 2 stores in 1964 to 114 stores in 1994. It’s very useful to mention the ikea’s vision that says “Creating a better life for the many people” for understanding the deep credo of saving cost among all the departments of IKEA, everything that IKEA does has the aim of reducing price to the customer. Besides its success stories, the company has faced environmental and social issues.

The environmental issue of Formaldehyde was solved but sales dropped by 20% in Denmark. In 1992, the company got the same issue, which cost IKEA around $7 million. IKEA learned a lesson; publicity can bring a big loss in sales, not considering the damage to the brand image. In the spring of 1995, another film is threaten to be shown on German television about children working at looms at Rangan Exports, an Indian company used by IKEA, and the producer then invited IKEA to send someone to take part in a live discussion during the program.

These events urged the company to consider environmental and social issues more seriously. It is very important to focus to the long term contract that IKEA establishes with its suppliers, in fact they promote “to develop long-term business partners”, and they also say “… We are in this for the long run” always with the aim of reducing cost and creating a faithful relationship. On the process of globalization, IKEA needs to get the cheapest suppliers and therefore goes to countries that offer cheap labor.

When IKEA set its suppliers in these countries, it could not avoid these problems.

The fact that IKEA does not have its own manufacturing facilities; instead it uses subcontracted manufacturers all over the world for supplies makes it more complex and difficult to keep track of the company’s suppliers and subsuppliers (almost 2300 suppliers in 70 countries and a range of 11200 products). It is even more difficult to keep track of children working in homes where whole families worked on looms from the subsuppliers’ level. The best strategy is to avoid social and environmental issues right from the beginning as when these issues emerge, they immediately affect the products’ sales tremendously.

To avoid this threat of loss in profit, IKEA may consider withdrawing from India. However, if IKEA withdraws from India market, it will lose a big opportunity of cheap labor and put the company at disadvantage position as other competitors accessing the same opportunities to compete for lower product prices. IKEA therefore should not look for a new business opportunity by leaving India but keep up with the trend and get ahead of the issue and its rivals. Some people may argue that if the company is actively involved with the issue, it may have a drop in profit compared to its competitors.

The threat may be true in the short term also because of the clause of cancellation of the contract. However, IKEA can turn the threat into a big opportunity in the long term by actively involving and publicizing its achievement whit the website and display advertising in the stores to let customers appreciate the effort ,as done before with the forest issue. The strict partnership with all suppliers doesn’t permit IKEA to abandon one of his supplier when problems occur, the supply network will be scared from the behavior of the company when an help is needed; in fact IKEA says that “We do not buy from our suppliers.

We buy unused production capacity” in this way we can observe that the suppliers depends from IKEA. To go or not to go to the show? If the show ensure IKEA the possibility of speaking freely and to defend itself, so to be able to speak and give further explanation of the problem, they should go; if the show doesn’t ensure any freedom of speaking and the show will be only a “public pillory”, IKEA should not go and do a press conference the day after, where it will explain deeply the press release and all the intention of IKEA for the future. For this complex situation, it is recommended that IKEA should join the program.

The company had gained already some positive achievements to the child labor issue since the problem was first raised by Swedish television. IKEA could discuss the information it had collected so far from UNICEF, Swedish Save the Children and the ILO and show it had the same attitude as the director of the documentary film as well as reaching the same goals of deleting child labor. It could show its appreciation to the director for helping spot the child labor at the company’s manufacturer and emphasizing that the company is going to analyze the case more deeply.

IKEA possibly mentions its spirit of not avoiding mistakes to search for creative solutions. Moreover with a carefully considered plan, participating in the television program would help save the brand and image. After the television program, IKEA needs to come up with a solution for the case and the long-term strategy to deal with child labor issue, and admitting that the clause of the contract was too strict, and it would be better to establish a plan (3-5 years) for the future with those countries.

Barner should make a trip to Rangan Exports and investigate the case entirely and get in touch with the reality of the facts. All the children working there should be collected and offered education opportunities (Corporate Social Responsibility, Citizenship of the company). The company needs to create its own children budget to help children found working. By this way, IKEA could continue its relationship with its suppliers (most of them are in developing countries), calling for the cooperation from suppliers to allow IKEA’s professional random inspection.

Working with Rugmark is another good option if IKEA can make sure the child labor problem is under control. Because IKEA does not have its own manufacturers and gets its supplies from other suppliers, it is challenging for IKEA’s ability to manage and control the whole production process. Unless IKEA can be sure that there’s no child labor in the company, it is encouraged to allow Rugmark to monitor the use of child labor on IKEA’s behalf. If IKEA follows the steps explained above, it will improve its level of social responsibility and sustainability.

The company could advance itself to the even higher level, an interactive level, by executing more assertive and precise plans. The interactive level promises a long-term advantage in brand image and profit as done before with the “going green” program. As child labor is considered “Indian culture”, it requires a lot of time, energy and finance to make progress. The company needs to work tightly with UNICEF, NGOs, and Save the Children Alliance to learn from each other.

In India, because of economic initiatives, families send children to work. Therefore, to help improve the situation, IKEA need to fund a budget in the need of education for those families. Besides, the company should lobby to coerce the government to get involved more actively in the process. In the long run, family income boosting plans need to be implemented to obtain a better standard living for Indian families as poverty is the root of the problem. 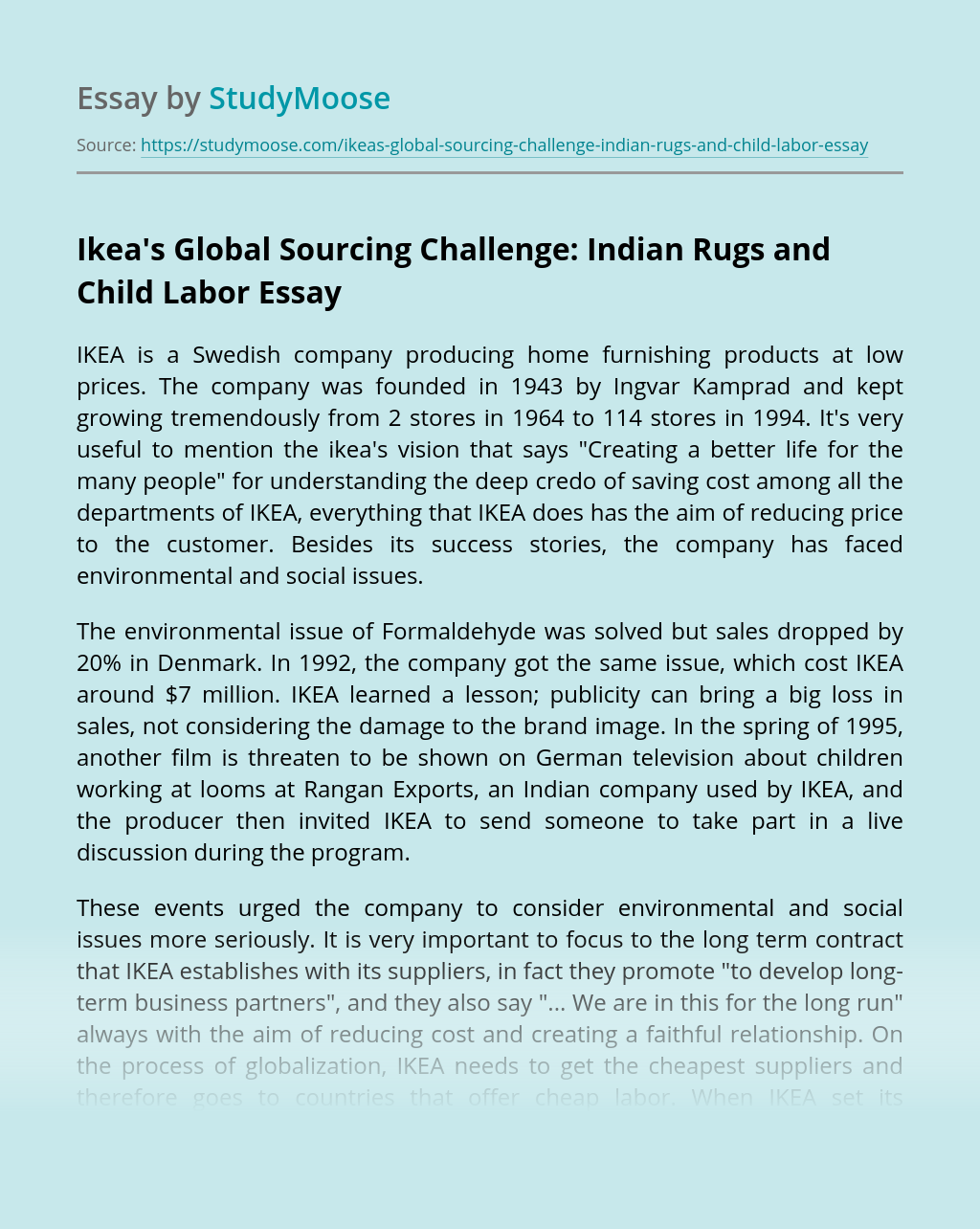