Ike at D-Day and The Atomic Bombing of Hiroshima

In this article I will be focusing in on two articles that were written during the second World War. WWII was a huge event in history. Many lives were forever changed in the years during the second World War. The term World War truly meant it affected the whole world whether it be the families of the Americans that were lost at Pearl Harbor or the millions of innocent Jewish lives that were halted at the hands of Adolf Hitler. The surprise attack on Pearl Harbor was the awakening of a sleeping giant that unfortunately ended horribly for the Japanese.

Don't use plagiarized sources. Get your custom essay on
“ Ike at D-Day and The Atomic Bombing of Hiroshima ”
Get custom paper
NEW! smart matching with writer

The innocent lives of the Jews that were lost was truly heart breaking. The death tolls were in the millions during the World War and the scars on the minds of those involved followed them for eternity. The survivors of the Holocaust tell their stories as if they are still there providing gruesome details of what they went through on a daily basis at the concentration camps.

In the article “Ike at D-Day,” Michael Korda Explains in phenomenal detail of what events were taking place on and around D-Day. The drawn-out article goes over the details of what events lead to the storming of beaches in Normandy.

The article itself is very well organized and ordered nicely. The author did not jump around all over the place while delivering the information. The orderly fashion of the article kept the reader intrigued. This analyzer felt that the author thoroughly answered all the questions he set out to ask even though this was a more informative article then a question answering article. Despite not having many questions to answer the author still developed a very informative piece of work. The article is very easy to understand with all of the detailed descriptions and order of all the information. This reader felt everything was much easier to comprehend with the events explained in order. The author shows no bias in this article because the article is more so written to inform the reader of the events on and around D-Day. The author did not need to really show bias because there are not multiple sides to this article. The information given by the author throughout the article is definitely beneficial in learning more about the event in history. The author uses pieces written by Gen. Dwight Eisenhower to provide a well- developed article for readers to better understand what he went through leading up to D-Day. The statements made by Eisenhower provide a more in depth look of what was going on and it gives this reader more information to learn from. The author does a great job of using words that create a better flow and easier to read experience for the reader. Being able to read through the article at ease creates a much better connection to the article for the reader. One of the only things the author could do to better this article would be if he cut down the article a bit. If the author took some of the unnecessary information provided in the article he could shorten it up some and make a shorter, but still informative article. Other than that small adjustment this reader believed the author did a fantastic job of portraying the events of D-Day clearly to readers.

In the second article titled “The Atomic Bombing of Hiroshima- The Public Explanation (1945),’ Harry S. Truman was delivering a speech to the public in order to inform them of what had just taken place in Hiroshima Japan. The article is very well developed and well organized. President Truman used very descriptive details on what exactly took place in order to thoroughly inform his people of what took place. I believe He set out and answered all the questions the Americans may have been wondering. He went over the details of the weapon used and he provided evidence of how the event took place. His attention to detail was evident in how he delivered this speech. The article is very well written and noticeably planned out in a way that informs the reader perfectly. Each detail is delivered to inform the Americans so they could be in the “loop” on what was happening overseas. President Truman does not show in bias in this article other than the fact that he is definitely pro-American while explaining what events had occurred. Being that was the President he would have to show a fairly large amount of favoritism to the United States. The authors evidence is from the events that occurred hours before. President Truman was the Commander in Chief and knew exactly what was going on and that is why the only evidence is from his own common knowledge. This reader believes there is nothing this author could have done to improve this article. This statement was written to inform and that is exactly what it accomplished. The information was delivered in an orderly fashion that was perfect for the reader to understand. The professionalism shown by President Truman is very honorable in how he handled the situation and chose to still inform the people of his country on the events that had taken place.

After reading both the articles I would conclude with while they are both very informative and descriptive pieces of work I had much more interest in the “The Atomic Bombing of Hiroshima- The Public Explanation (1945)” article. I felt that article tied to the reader more being that I am an American and I am proud of the retaliation made for the horrible surprise attacks on Pearl Harbor. I was intrigued at how President Truman delivered the speech with the outmost confidence and admiration for this great nation. The events including in each article was informative to the reader and is great knowledge to know about. Both articles would be fantastic research tools if used for a research article. Both of the article are important pieces of history and tie in to the building of the United States empire. While I did still enjoy the article “Ike at D-Day” I felt the article was somewhat long and drawn out leading to an interested but unfortunately “burned out” reader. Overall, I enjoyed both articles and learned very valuable information from each of the articles. I learned useful information that I can take with me forever.

Ike at D-Day and The Atomic Bombing of Hiroshima. (2021, Oct 05). Retrieved from https://studymoose.com/ike-at-d-day-and-the-atomic-bombing-of-hiroshima-essay 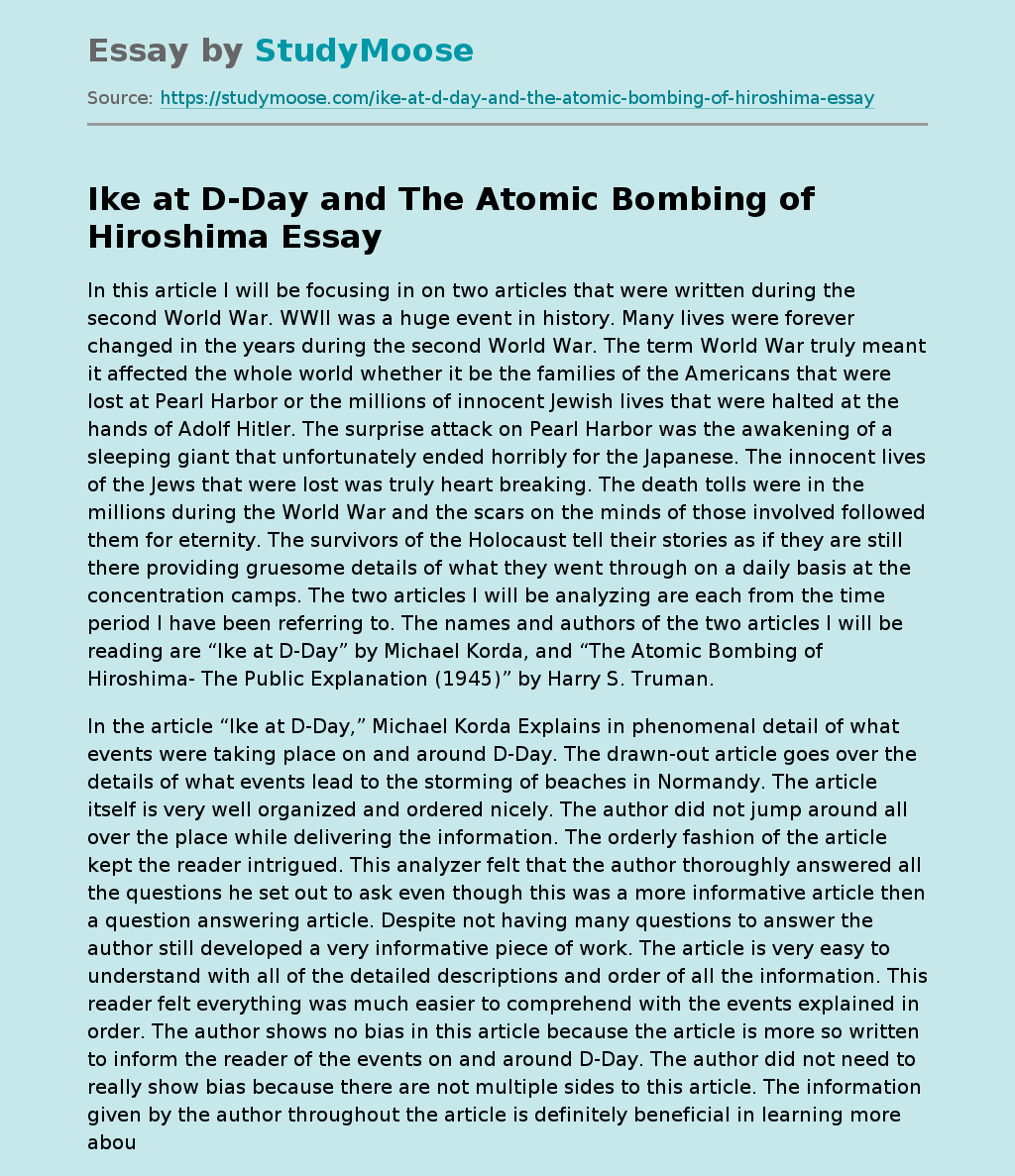