"If These Walls Could Talk" Movie Review

The movie, If These Walls Could Talk, is about a couple, Abby and Edith, who’s lesbian relationship was minimized by the way society, in the 1960’s, viewed them. Their relationship was like a marriage in that they lived together, slept together, and cared about each other in all the ways that a man and woman would in a traditional marriage. If Abby and Edith could have been married, it would have opened the doors to many legal ramifications. Edith would have been allowed to see and spend time with Abby in the hospital.

Don't use plagiarized sources. Get your custom essay on
“ “If These Walls Could Talk” Movie Review ”
Get custom paper
NEW! smart matching with writer

Also, the doctors and nurses involved in taking care of Abby would have been more sympathetic towards Edith in loosing a significant other. Abby’s nephew, as being the next of kin would not have been granted Abby’s estate because it would have rightfully belonged to Edith. The other people in the film didn’t seem to understand Abby and Edith’s relationship.

Most saw them as really close friends. They didn’t seem to show affection towards each other in public places such as the movie theater or walking down the street. When Edith met a woman in the hospital waiting room, she referred to Abby as her friend.

The nurses and doctors assumed that Abby and Edith were close friends because Edith didn’t tell them otherwise. Also, Abby’s nephew and wife seemed to also think they were just friends. However, I think the nephew knew better because as his wife dictated what to do with Abby’s belongings, his sensitivity towards Edith’s feelings grew. Abby and Edith’s private commitment to each other was strong and loving. In the privacy of their own home they showed respect, compassion, and love towards each other as strong as a man and woman’s relationship would be.

They shared everything they owned and built thirty years of memories and possessions together. All of this private commitment was not valued in the eyes of society or the law. The duration of time they were together meant nothing in terms of legalities. Without a Will, Edith was entitled to absolutely nothing of Abby’s. Also, because Edith wasn’t legally family, she wasn’t allowed to see Abby or even be notified about her condition. Once Abby was declared dead, Edith had not only lost the love of her life but also the keepsakes they bought together and everything they worked for the last thirty years.

"If These Walls Could Talk" Movie Review. (2017, Jan 05). Retrieved from https://studymoose.com/if-these-walls-could-talk-movie-review-essay 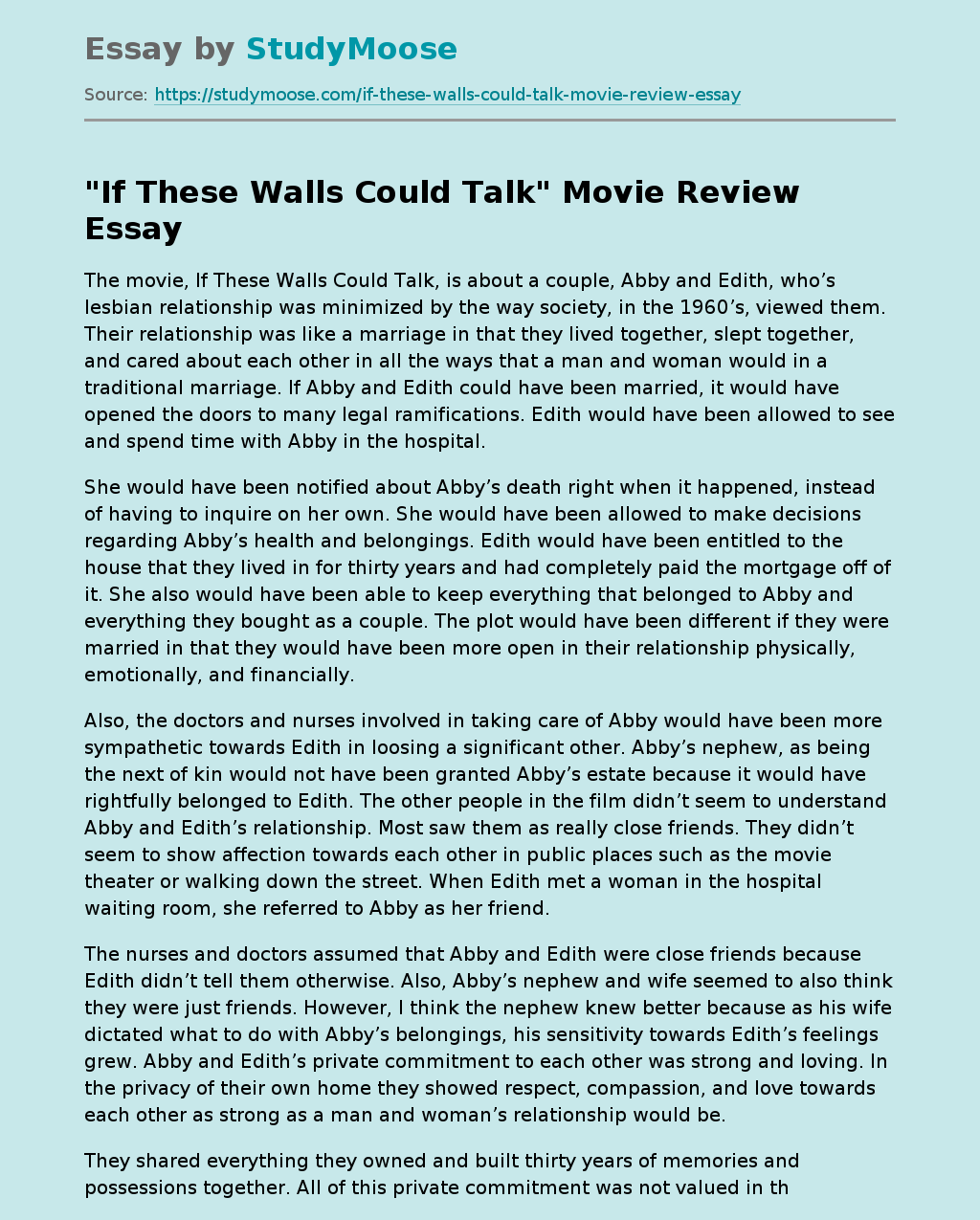