If I Were the Prime Minister of India

The Prime Minister of India, aha! The highest executive of the largest democracy of the world, what a promising position, what a status, and Oh! What laurels. However I see this position as it were with a pinch of salt as, it is more a thorny crown on the head of the person who wears it. Dealing with the daily affairs of the country, is not easy, so, this positions, this status, this name are not without the demerits. If I was to be the Prime Minister of India, the first and most difficult thing I would deal with would be the building of the character of the people of the nation.

Turn in your highest-quality paper
Get a qualified writer to help you with
“ If I Were the Prime Minister of India ”
Get high-quality paper
NEW! AI matching with writer

There is no magic cure for this malady which is inherent in the Indian scene.

Since I know that neither can character be infused overnight, nor can it be eliminated from the scene, I would ensure that all bad characters no matter that, are booked for their wrong doings, punished as per the laws of the land. I really believe that even if just a few wrong doers are punished strictly, instead of being shielded by their patrons, then others will not indulge in similar malpractices.

I earnestly feel that punishment is the only approach to this Herculean problem of character. If few, yes, just a few are punished all others will be frightened of the consequences of wrong doing. This exercise of punishments I would start from the highest rungs of the ladder and then come downwards, though the lower rungs would get cleaned by themselves if the cleaning be done at the top. The next area of influence I would try to work upon would be the education of the masses. Our education as I understand it had been framed by the British rulers. They had the objective of creating babes for their Government administration who would slave for them. It is this heritage of creating babus that we have continued for the last so many decades, and made a real mess of our education.

The area of higher education has been pampered but the sphere of primary education which lays the foundation of the country ‘s literacy has been neglected totally. I would lay greater stress on primary education and make higher education a choice for the children and that also only according to their choice and merit. I would not allow any admissions in institutes of higher education on the basis of just donations. My heart feels so very hurt when I see all around me the influence of westernisation in our country. It appears that we have just nothing of our own and we are learning and have learnt everything from the West. A culture as rich as India ‘s having to borrow everything from the west depicts the slave mentality of us Indians and I feel very sad when I see it all around me. My next priority as the Prime Minister would be the Indianisation of the Indians. I do wonder where our culture has disappeared, where our life style and our heritage are. How could we throw such riches of a great culture to the winds? I would infuse the teaching of Indian culture in every school and college. T

his would not mean that we stop learning from the west no, not at all. We would continue borrowing all knowhow from the west but, only in spheres in which we have to, not just because it is western but because it is necessary for our growth. Besides all this, I would ensure that social changes are brought about evenly throughout the country, keeping in mind beautiful blend of our culture and the western ethos. For social changes I would mobilise and encourage non Government agencies because I feel that social changes can be brought about smoothly only by social welfare organisation and not laws of the Government. With all these priorities I would also try to ensure infusion of patriotism in the younger generation.

Sometimes I really wonder at the whereabouts of our patriots of the early decades of this very Century, where are they, and have we stopped producing the like now? With this much achieved or at least the trend set, I would be happy and a person absolutely satisfied with my achievements. With so much to be done within the country, I would try also to produce good neighbourly relations with all the neighbours of India, as; I believe a good neighbour is an asset to an individual and even country. I would send peace delegations to all the neighbours and invite them on peace missions to India. I do think that such activities would yield satisfactory results and we would have friends all around.

If I Were the Prime Minister of India. (2016, Apr 14). Retrieved from https://studymoose.com/if-i-were-the-prime-minister-of-india-essay 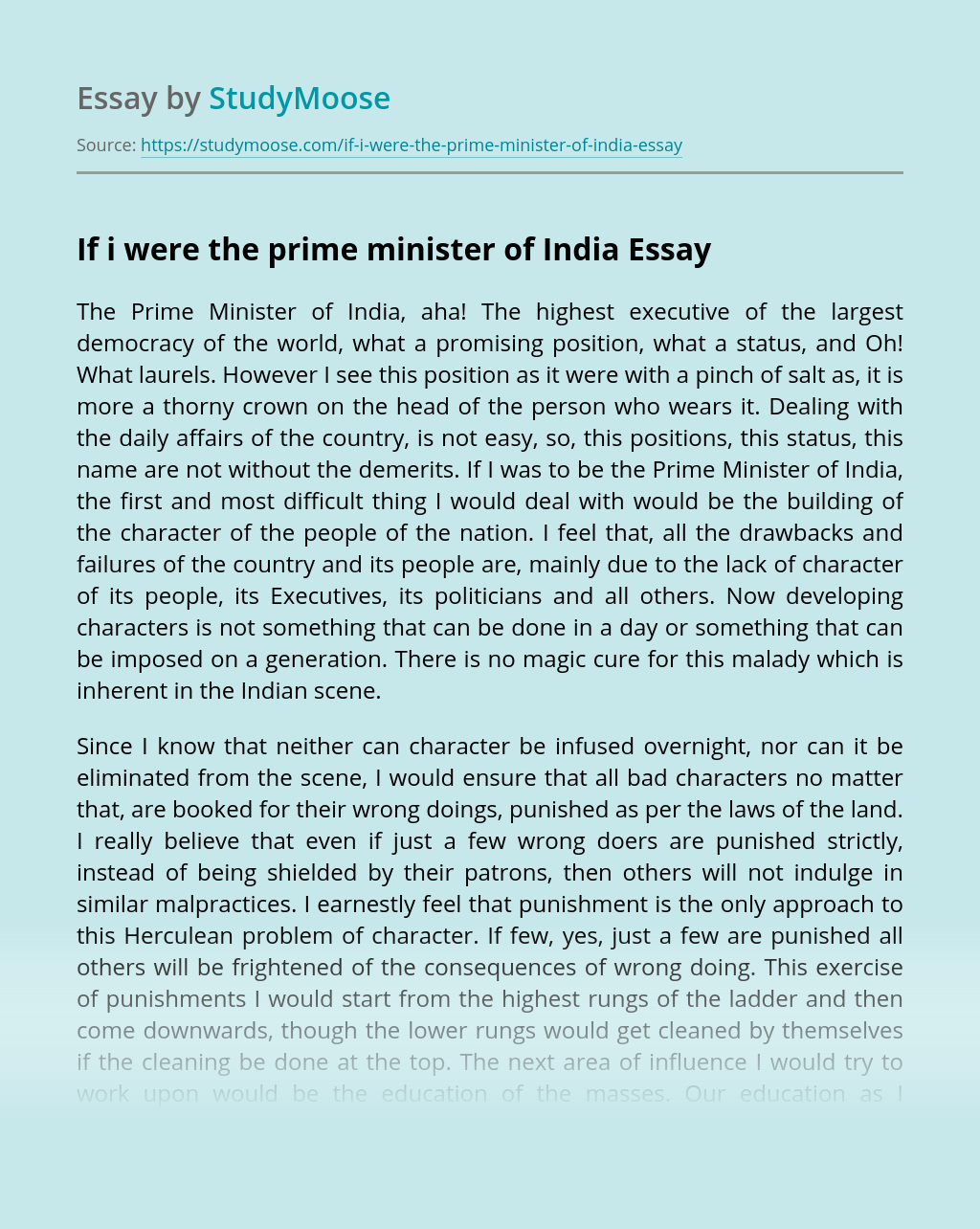 Turn in your highest-quality paper
Get a qualified writer to help you with
“ If I Were the Prime Minister of India ”
Get high-quality paper
Helping students since 2015
Stay Safe, Stay Original