If I Were a Boy

The artist Beyonce has a fantastic music video, directed by Jake Nava. He is best known for his Anti-gun campaign music video; he also attended University of Westminister. It is about a girl who put herself in a guys shoes. This particular song portrays an R&B genre. Beyoncé is shown as a female police officer arresting a grown, black male who looks to be from an impoverished area. This often times suggests R&B; however, both Beyoncé and the male featured in the video appear to be clean cut and well presented.

Don't use plagiarized sources.
Get Your Custom Essay on If I Were a Boy Just from $13,9/Page

They also show the couple’s nice apartment, and the guy is shown giving Beyoncé an expensive-looking pair of earrings. Based on this information, one can assume that this music is not R&B, it’s pop.

The purpose of this video was to highlight the misunderstanding between genders. The theme of role reversal was used. Beyoncé was shown in the shoes of a man.

She treated her man the way your stereotypical male would treat a female. Men don’t take the time to sit down and eat breakfast together, as shown in the video; they tend to worry more about work, alcohol and other women. Beyoncé illustrates the feeling of men coming and going, always assuming that when they do in fact come home their girl will be right there waiting for them. She proves that point wrong when she says “you lose the one you wanted because you’ve taken her for granted”. A person can only take so much before they decide to walk away. Aside from what had previously been mentioned it is noted that there is a very strong relationship between the lyrics and the visual. The way Beyoncé acts towards her man in the video is much the same as she describes it through her words. She shows distance and selfishness. She puts herself first, which is what she feels most guys do. This video portrays their closeness, but also her reluctance to be treated poorly. At this point, viewers are able to sense her.

confusion: she seems tired of the situation, tired of her man constantly coming and going. It almost seems as if its time for her to make a decision, judgment day. The roles are suddenly flipped and everything begins to make sense. However, if you pay close attention you also begin to realize that the record company is trying to do multiple things with this song. You can tell that the record company is not only trying to sell the track but the artist as well. A vast majority of Beyoncé’s songs have leaned more towards the R&B genre, all songs that could be played at a party and cause a live atmosphere whereas this song is deeper and more heartfelt. This song is looking to grab peoples attention in a different way, she wants people to relate. The record company tries to sell her as a diverse artist, and was trying to prove that she is capable of executing multiple forms of music. Overall, this song is about a female who feels as if men have it easier, almost like they can say and do things that woman cannot do within a relationship without facing consequences. Beyoncé feels a man wouldn’t stick around if they were treated like a female. They wouldn’t have the patience nor would they continue to make an effort. This song/video combo was well executed and served a clear purpose. Some women feel a man’s position is easier to fulfill, but who is to say that some men don’t feel that way about women? It would be very interesting to see a male version of this music video. 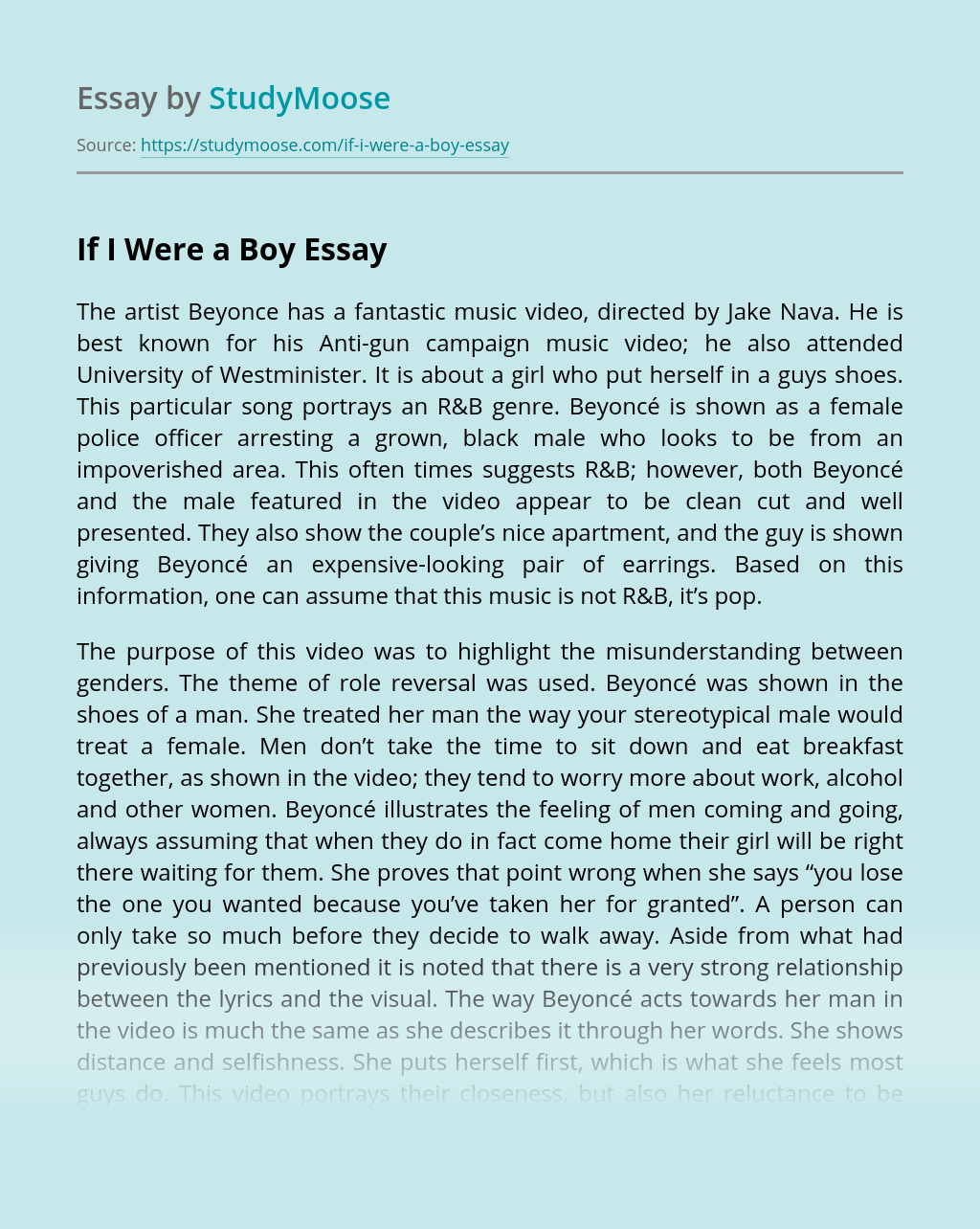 “On the Internet, no body knows you’re a dog. ” Herring (2003, p. 205) mentioned this caption of a cartoon bearing published in the New Yorker (July 1993). May be in this age with the internet evolution it’s hard to know it’s a dog, but what about distinguishing user’s gender in computer-mediated communication (CMC) is...

As a female working in a professional environment and living in a society that promotes economic, social and cultural rights I often find myself concerned with gender equality. Sometimes I feel that gender equality is just a myth, because, I have yet to see women promoted or granted the same salaries as their male counterparts...

In this novel, The Street by Ann Petry, tells just how hard life can be on the streets of Harlem. Reading Petry’s Novel, I mentally put myself in the shoes of, Lutie Johnson. Lutie is an African American woman who is also a single mother. Lutie tries her best to provide the best life she...