Quaid-e-Azam Mohammad Ali Jinnah,the great leader of Muslims of Sub Continent gave practical shape to the ideology given by Allama Iqbal. He He had a strong believe in Hindu Muslim unity and was of the opinion that both Hindus and Muslims should launch joint efforts to get rid of British rule. After joining Muslim league in 1913,he continued with his efforts to bring about Hindu Muslm unity but he was greatly disappointed to see the prejudicial attitude of the Congress and Hindus towards the Muslims.

Turn in your highest-quality paper
Get a qualified writer to help you with
“ Ideology of Pakistan ”
Get high-quality paper
NEW! AI matching with writer

Following are some extrcts from the speeches and statements which he delivered from time to time for explaining the ideology of Pakistan.

In 1913 Quaid-e-Azam believed that Congress and Hindus would never recognize the rights of Muslims. He declared while representing the Muslims in the Second Round Table Conference in 1913: “The Hindu Muslim dispute must be settled before the enforcements of any system or constitution. Untill you do not give guarantee for the safeguard of the Muslim intrests,untill you do not win their (Muslims) co-operations,any constitution you enforce shall not las for even 24 hours.

Quiad-e-Azam was a firm advocate of two nation theory which became the ideological basis Pakistan. He considered the Muslims as a separate nation. He said: ” Pakistan was created the day the first Indian National entrerd the field of Islam”. He difined the two nation theory as: ” The Muslims are a nation by every right to establish their separate homeland. They can adopt any means to promote and protect their economic social,political and cultural intrests.

At the historic session of the Muslim League at Lahore,he said: “The mussalmans are not a minority. They are a nation by any definition. By all canons of International lwa we are a nation”. In his presedential address at the annual session of Muslim League at Lahore in 1940,he said: “India is not a nation,nor a country. It is a Sub Continent of nationalities. Hindus and Muslims being the two major nations. The hindus and Muslims belongs to two different religions,Philosphies,social customs and literature.

They neither intermarry nor interdine and they belong to two different civilization which are based mainly on conflicting ideas and conceptions. Their aspects on life and of are different. It is quite clear that Hindus and Muslims derive their inspiration from different sources of history.”  While addressing the students of Muslim University,he said: “Hindus and Muslims through living in the same town and villages,had never been blended into one nation. They were always two separate entities. Quaid-e-Azam emphasized on the Islamic idology as being the basis of the struggle for Pakistan because he believed that only Islam was the unifying force of the Muslim Millat. He said: “What relationships knits the Muslims into one hole ,which is the formidable rock on which the Muslim edifice has been erected,which is the sheet anchor providing base to to the Muslim Millat,the relationship,the sheet anchor and the rock is Holy Quran.” In 1946,Quaid-e-Azam declared: We do not demand Pakistan simply to have a piece of land but we want a Laboratory where we could experiment on Islamic principles. ”In his message to the frontier Muslim student Federation,he said: “Pakistan only means freedom and independence but Muslims Ideology,which has to be preseved which has come to us as a precious gift and treasure and which we hope,others will share with us.” The above sayings and statements largely prove that Quaid-e-Azam wanted a establish an Islamic system as a code of life because he believed that it was the sole objective of the Pakistan Movement. 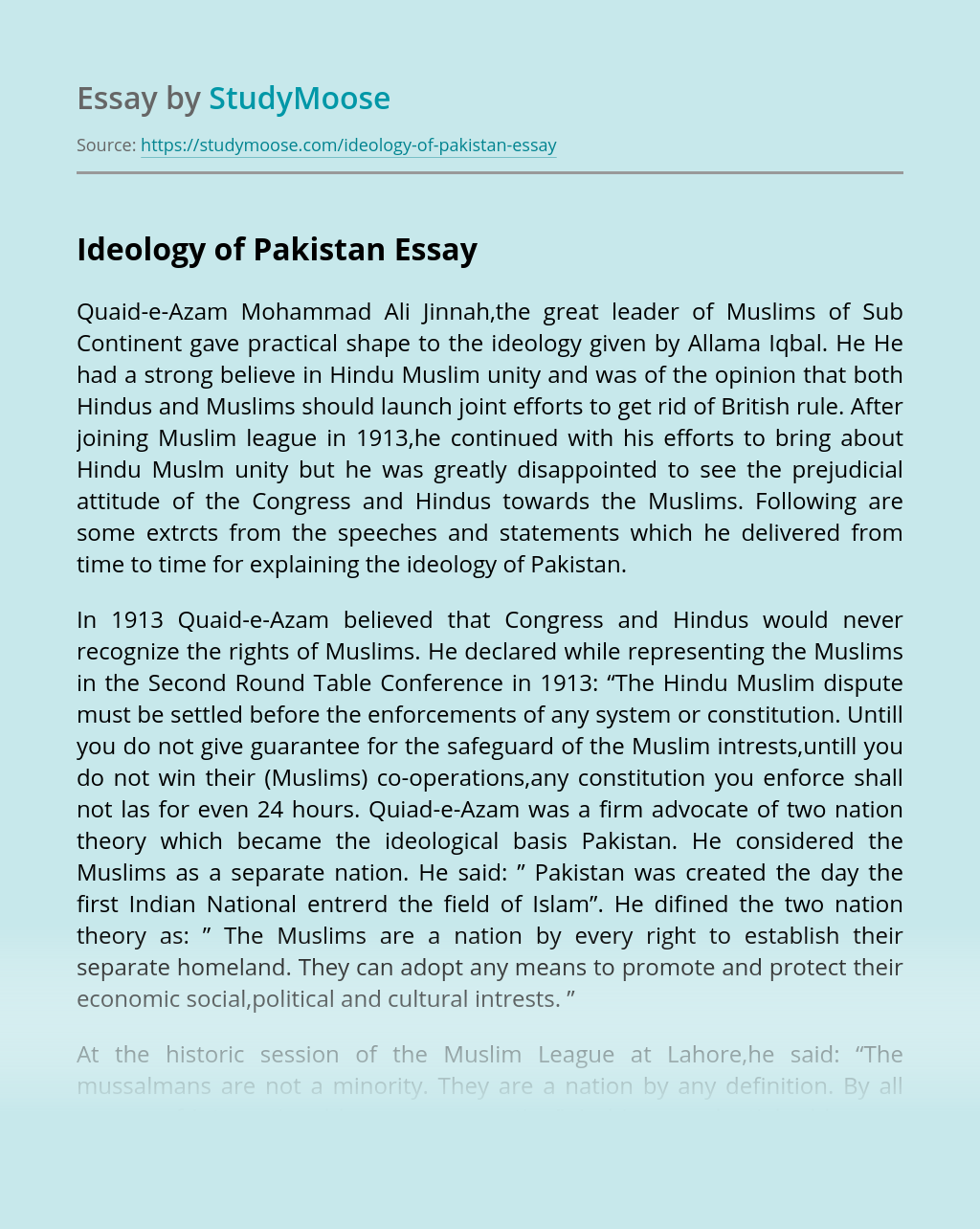 Turn in your highest-quality paper
Get a qualified writer to help you with
“ Ideology of Pakistan ”
Get high-quality paper
Helping students since 2015
Stay Safe, Stay Original