Social inequality and inequity are rampant cases that can be depicted on the status quo. These actually act as perpetrators of intractable crimes in our social milieu. These are indeed the catalyze for the spread pf communicable disease in the society—-disparity. And even in the game of love, these have been proven to be the barrier that creates a greater disparity among the social statuses of our society.

From the film entitled Wedding Crashers, the above-mentioned scenario was clearly exemplified.

Don't use plagiarized sources. Get your custom essay on
“ Ideological Film Analysis ”
Get custom paper
NEW! smart matching with writer

Having the fact that the two guys, who act as the wedding crashers, are commoners and the family of the girls they are eying for belong to the alta sociedad, the difference between the two becomes visible. When the two wedding crashers clashed with the daughter of a family under the “spell” of political realm, the two different worlds coincide portraying the different scenarios that truly happen in the society.

The story is basically about a pair of friends who work in a law firm and were involved in various cases regarding divorce.

This experience made them realize what wedding can only bring to them and doing serious about it is not their plan. Thus, the hobby of being wedding crashers become the outcome of their daily experience and seducing bridesmaids turn out to be a norm in their life.

Until one day the partners in crime( Jeremy Klein and John Beckwith) bumped into the reality that not all of what they are doing will just lead them to a laugh-out-loud experience and endless cycle of seducing women.

The comical life they always anticipate turns out to be a big chaos that both of them do not know how to give solution into it. Never did they imagine that a wrong party they will crush into will come along their way and make them decide to stop finally what they have planned and done habitually.

The dilemma comes in when they crashed into the wedding party of the daughter of the Nation’s Secretary of Treasury and finally fell in love with two of its sisters, Gloria ad Claire Cleary- a primary rule they should never break but inevitably did.

Belonging to the different “faces of the society” with different class status, political ideology, sociological  background an d points of view they are believing into, the the partners  in crime necessitate to decide whether or not they should  still fight for the what they think is right or for what everyone else dictates them to be right.

Taking into consideration their routinary life of cashing into the the wedding, seducing and flirting with whoever girls will be attracted to their machismo, now being crucially involved in a family dominated by political realm, the best of friends have to made a choice whether to turn their back to what their “past life” brings them and finally embrace a new life tat is absolutely different from the one they get used to because of love. But little did they know that the past they are trying to escape from will be the hindrance that will jeopardize their  way towards pursuing their love.

The film conveys the social milieu we are into: the art of seduction, the different social strata, the effectual influence of family upbringing and orientation, the dilemma between sincerity, mere attraction and plain sex, and the ambiguous disparity among working classes under the influence of politics.

The film may portray a comical scenario that we do encounter in  our daily life. But that is only on the superficial part. What we do not see is the  depth of the issues behind all of the laughters and funny scenes. What we do not pay attention with is actually what we need to analyze in the movie. And what we do not hear after the jokes being cracked and humorous lined being  delivered is the true orientation of the disparity in the society.

Appearance must not be regarded as the sole reality. Not all we perceive as humorous in the superficial part will still be consistent with that of the details we have not encounter yet. True, the movie is funny! To crash into a wedding just to seduce women might seem just like an ordinary scene in the society. But to crash into a wedding of a high-class family belonging to a famous political icon and fell in love inevitably to its daughter is another story.

The disparity in the society surreptitiously reeks everywhere. And an effective panacea for this malady only lies in our intellectual judgment and  doing away from the superficial depiction of the reality. And of course, not just mere perceiving that humorous thing cannot encounter a dilemma brought by the social inequity. 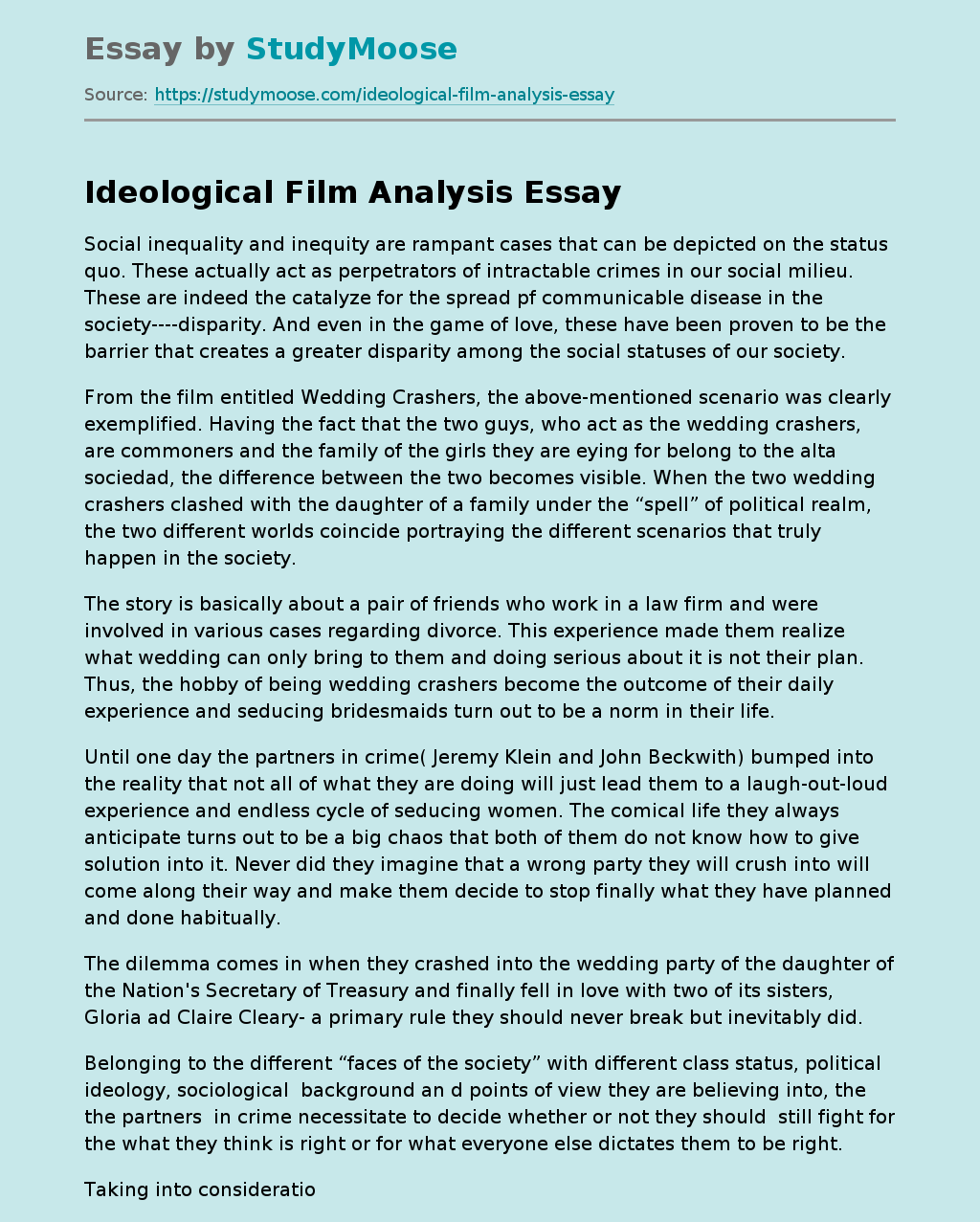