Don't use plagiarized sources. Get your custom essay on
“ Identify the statutory and voluntary agencies who may work together at the scene of an emergency incident ”
Get custom paper
NEW! smart matching with writer

The service supports and assists those in need, and is an excellent resource in terms of trained staff, medical aid and emergency vehicles. It can also provide evacuation centres.

The St John ambulance has helped the statutory agencies during the floodings 2007 in York. “Throughout June and July 2007 our volunteers worked tirelessly to help support communities hit by heavy flood waters. We have provided a 24-hour support with volunteers and vehicles in a bid to help people struck by the disaster and set up many rest centres for those evacuated from their homes”.

As you can see St John Ambulance makes a huge difference when they help the other emergency services at a major incident as it says above ‘set up many rest centres for those evacuated from their home’. By them doing that they have helped out the police services which saved them plenty of time.

British Red Cross – The British Red Cross is a voluntary organisation that provides all sorts of things for example: First Aid, Emergency Response, Heal and Social Care, finding missing family, preparing for disasters and last but not least refugees support.

During an incident the organisation can provide emotional support, support with the care of children and pets use of shower and toilet facilities, provision of toiletries, clothing, light refreshments, use of a telephone and last but not least first aid.

“As a leading voluntary organisation for emergency response, the Red Cross has thousands of specially trained volunteers who provide a range of services to people in emergencies, including practical and emotional support and first aid services.

The Red Cross also has well-equipped fire and emergency support service (FESS) vehicles which play a vital role in supporting local fire and ambulance services. Before the flooding began, we launched a co-ordinated response to help vulnerable people across areas threatened by flooding in the UK. Our response included: Evacuation, staffing rest centres, support to the statutory services, distribution of emergency provisions, support from across the organisation, supplies and information.

Mountain rescue – Mountain rescue, a voluntary service that is train to rescue people who may have an accident it the mountain or lake area where there is limited ways to contact anybody for help.

The Mountain Rescue team has supported the statutory agencies during the Grayrigg train crash at 2007. “Mr Farron, MP for South Lakes, said: “It’s only fitting that Network Rail’s fine goes to help those who were first to provide assistance on the night. Sadly it is all too true that these wonderful volunteer services do have to hold out a hand for windfalls and without them they could not survive”.

Identify the statutory and voluntary agencies who may work together at the scene of an emergency incident. (2016, Apr 28). Retrieved from https://studymoose.com/identify-the-statutory-and-voluntary-agencies-who-may-work-together-at-the-scene-of-an-emergency-incident-essay 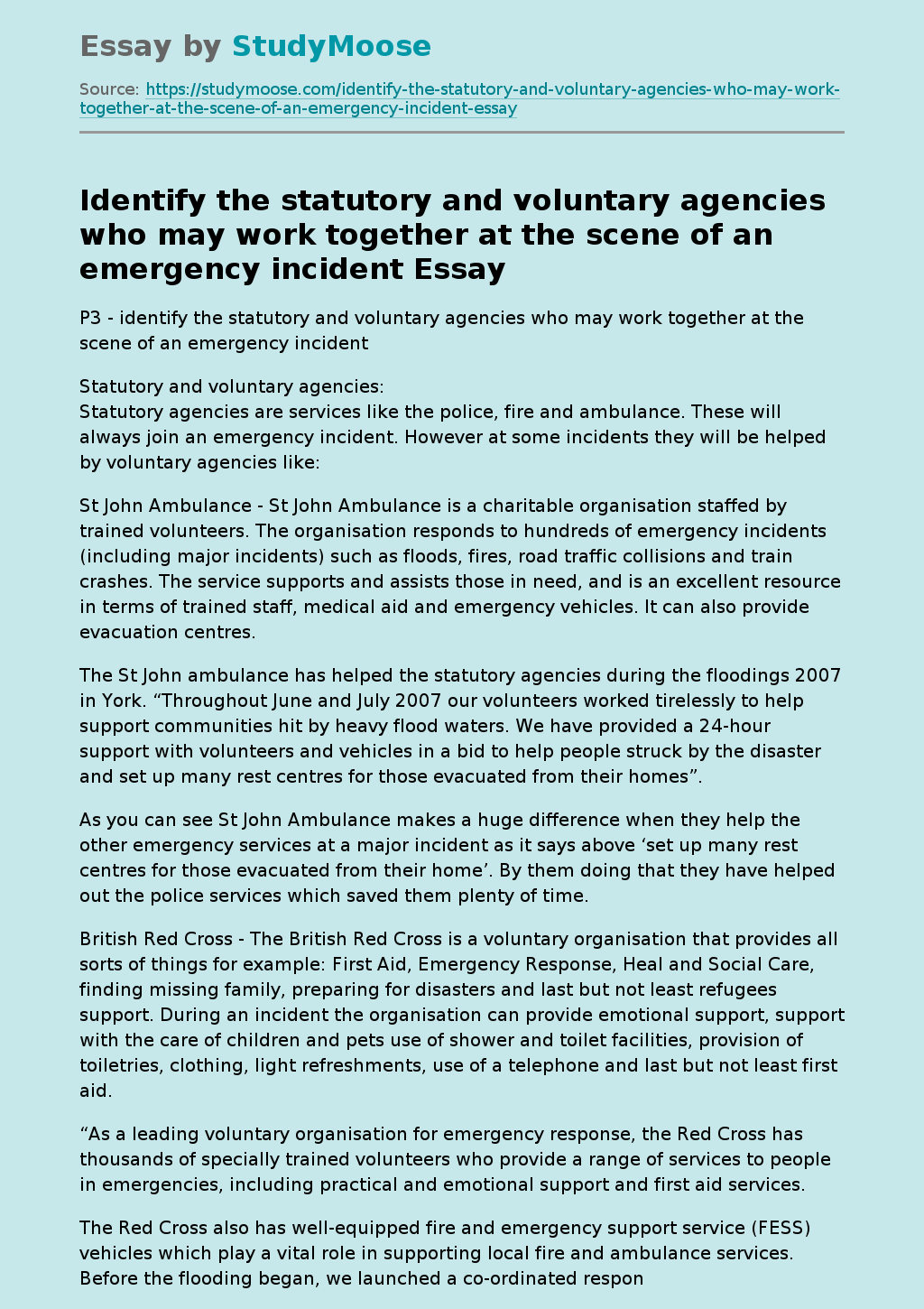