Artist like any other human been, are trying to understand, and explain the world to others, and to themselves, they use their experiences, and imagination, in order to make sense of the world , tangible, or intangible, to do this the artist assume four roles, Henry M.

Sayre in his book “A World of Art” define those roles as: 1) Artist help us to see the world in new or innovative ways: In this role the artist will produce a piece that generate a new sensation, or a new way of thinking, as an example the artist Yayoi kusama in her work, “You Are Getting Obliterated in The Dancing Swarm of Fireflies”,2005, she create a room who’s walls, ceiling, and floor is covered by mirrors, inside the room is and assortment of led lights hanging from tiny wires above the ceiling, went the spectator enters the room immediately feels the sensation of been in space, floating, and his/her persona perceive the sensation of been diminished by immensity of the space, created by the illusion of the mirrors.

Turn in your highest-quality paper
Get a qualified writer to help you with
“ Identify the four roles that artists play that have not changed over time ”
Get high-quality paper
NEW! AI matching with writer

Another example is artist Xia Xiao Wan (Innovative Art Ideas), he will paint multiple layers of glass separately with semi-translucent colors, all six facets of the sheet will be painted, and then put together in groups forming a cube, offering a new and unique experience for the paint spectator, a 360 degree viewing angle, instead of the traditional two dimensional paints.

2) Artist make a visual record of the people, places, and events of their time and place: At times the artist just want to record an event, person or an object, sometimes to impartially describe it, or to appreciated it, or to criticize it, two of the most used forms of art for this purpose are, painting, and sculpture.

In the painting “Jahangir in Darbar”, 1620, it shows the muslin ruler of India Jahangir seated in his court during and audience, is easy to deduce the diversity, and acceptance of Jahangir court, by the faces, and clotting of the people assisting. Endless paintings, and sculptures, of battles, cities, landscapes, and portraits, are the backbone of the historical record of humanity. 3) Artist make functional objects and structures (buildings) more pleasurable and elevate them or imbue them with meaning: The mankind is being building objects since the beginning of time in order to satisfied their needs of protection, from the elements, and from themselves , also to

process food, and a myriad of other uses, but humans have a necessity of beauty, this necessity melts in every object that humans produce, as an example we can analyze “the coffin” a very basic object, a box, whose only purpose is to contain the physical remains of a death person, if the African artist Kane Kwei build this object just to fulfill this function, he will construct a rough box with the basic dimensions to accommodate a body, and his work will be finished, instead he embrace his need of beauty, and create carving coffins with meaning for the decease, and the people who knew the decease, coffins in the form of fishes for fisherman’s, expensive cars for the wealthy, suddenly the coffins is not just a box, is a object of beauty and meaning. 4) Artist give form to the immaterial – hidden or universal truths, spiritual forces, personal feelings.

In this role the artist is trying to explain, or represent spiritual believes, feelings, or forces of nature, like God, death, birth, fertility, love, lust, and many more; one of the most notorious representation of this role is the religious art, paintings, sculptures and others forms of art, representing Gods like Jesus, Buda, Zeus, trying to show a representation of a certain believe. The artist Jan Van Eyck in his painting “The Ghent Altar”, 1432, represent God as a young king/God, very powerful, very rich, but benevolent and merciful, supported in the sides by the Virgin Mary, and John the Baptist, reigning on top of a assortment of people, his adaptation of God is a direct representation of what he knows, kingdoms and kings, mixed with the ideas of catholic church. Works Cited http://www. pinterest. com/pin/265712446734822517/, Innovative Art Ideas Sayre, Henry M. A world of Art (7th Ed. ). Orange State University-Cascades Campus: Pearson/Practice Hall, 2012.

Identify the four roles that artists play that have not changed over time. (2016, Jul 11). Retrieved from https://studymoose.com/identify-the-four-roles-that-artists-play-that-have-not-changed-over-time-essay 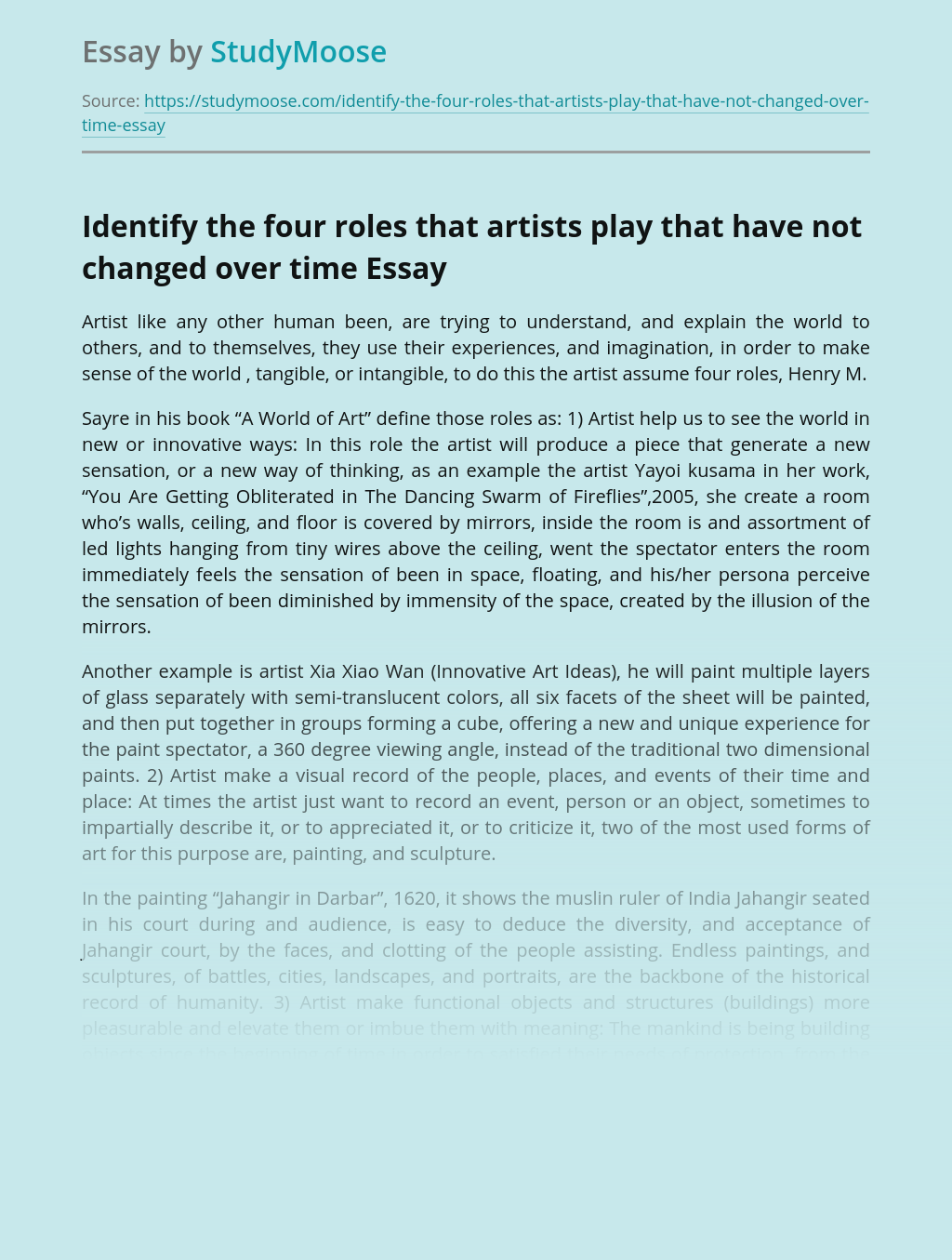 Turn in your highest-quality paper
Get a qualified writer to help you with
“ Identify the four roles that artists play that have not changed over time ”
Get high-quality paper
Helping students since 2015
Stay Safe, Stay Original