Ideas Contradicting The Interpretations Of Buddhism

According to Keown, he has also interpreted in the way that although the Buddha is strongly against committing suicide or seeking euthanasia, there is no requirement to carry out futile or unduly burdensome treatments including resuscitating the dying individual. The burdensome could come in various forms, such as physically, mentally or financially. Unduly burdensome treatment mentioned is not an absolute thing, different people may feel burdened to a different extent. In other words, when discussing in the context of financial burden, simple medications might even be a burden for some people.

Don't use plagiarized sources. Get your custom essay on
“ Ideas Contradicting The Interpretations Of Buddhism ”
Get custom paper
NEW! smart matching with writer

Hence, prior to discussing whether we need to legalize carrying out euthanasia or not, we need to work on fixing the core problem of for why people seek euthanasia so that people would not choose to undergo euthanasia just because of financial burden.

Another debatable point is that according to Damien Keown, the intentional hastening of death is, however, morally unacceptable in all circumstances in Buddhism[9]. However, we are already conducting countless acts of intentionally shortening our life, and hence hastening of death.

For example, eating fast food, drinking alcohol and smoking and many more. We all know that those are all detrimental to health and would harm our body in many ways and would eventually lead to hastening of death. However, that does not mean that we are all making the severest sin daily. My point Is that as long as our intention is not about simply wanting to die, we should have freedom to do so. For the case of euthanasia, the intention is to terminate excruciating pain after sober reflection, not simply wanting to die for an inexcusable reason.

Also, we already have the machine and medicine to prolong life, which could also be considered as unduly burdensome treatment according to the Buddha’s saying. Since there is no absolute boundary for an unduly burdensome treatment, it means that there should be acceptable cases and that generally known ideas can be viewed in a different way. Also, we have control on giving birth and on prolonging life but we are lacking choices and less control when it comes to death, that we only have the choice to delay death.

Looking at it from the positive side, seeking euthanasia might also be a way to let a person welcome a new life that is about to come. Also, since eternal life would bring harm to our society, we should find the balance. Although one has sought euthanasia and made the severest sin, that you would be born into an animal, some people might want to choose that over living consecutive days of suffering and it could be a new chance for them. This means that they will have to responsibility for their choices and actions and hence, more options to death should be available to respect every different individual with their own karma. In actual fact, the role of Buddha is not to make decision on behalf of each and every individual, but to give advises to guide people in the right direction. Hence, we should have more options for how we want to end life so that we could choose our own way of dying since we, ourselves are responsible for carrying out own actions. 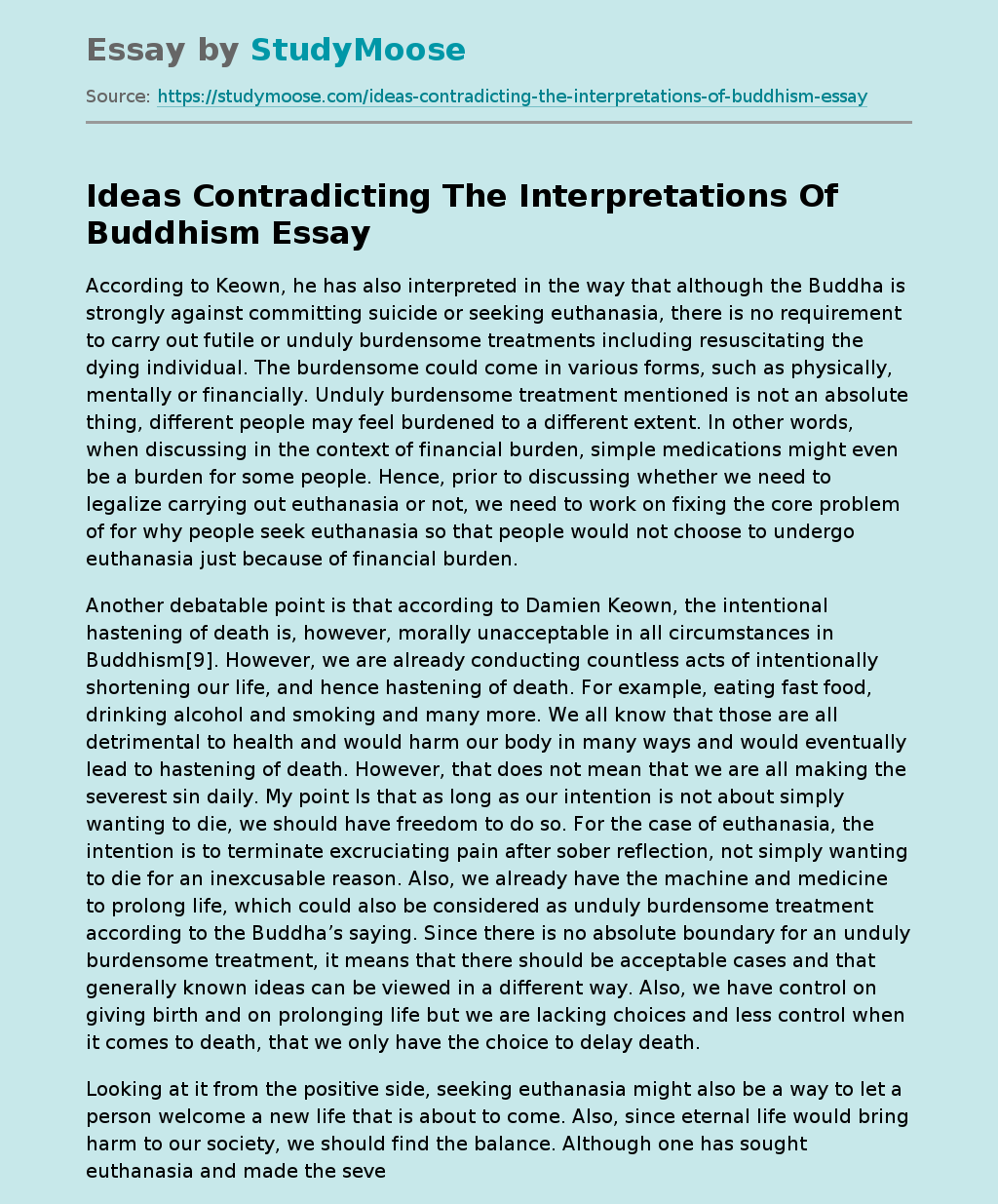