I wish I was the richest person on earth

I wish I was the richest person on earth, I wish I was the president of Maldives, I want to be a singer, I want to be a doctor. I’m sure you have dreams like these, well, not precisely, but I’m sure you will have dreams. Anyway, most of the times we see that people hesitate to become what they want to be and often give up on their first or second try. Why do they give up? Haven’t they heard the saying, “Failure is the key to success”? Respected teacher and my amicable friends, today I’m here to give a speech regarding the address given by J.

Don't use plagiarized sources. Get your custom essay on
“ I wish I was the richest person on earth ”
Get custom paper
NEW! smart matching with writer

K Rowling “the fringe benefits of Failure and the importance of Imagination. ” Every great achievement was once considered impossible. Here I am pointing out three incredible people who were once said nothing before they became famous. First there is Thomas Edison, the creator of the bulb; in his early years, teachers told Edison he was “too stupid to learn anything.

” Work was no better, as he was fired from his first two jobs for not being productive enough. Even as an inventor, Edison made 1,000 unsuccessful attempts at inventing the light bulb.

Of course, all those unsuccessful attempts finally resulted in the design that worked. Next is the person who is known as one of the most iconic faces on TV as well as one of the most richest and successful women in the world; Oprah Winfrey. She faced a hard road to get to that position, however, enduring a rough and often abusive childhood along with numerous career setbacks including being fired from her job as a television reporter because she was “unfit for TV.

” Last but, not the least; Walt Disney who was fired by a newspaper editor because, “he lacked imagination and had no good ideas.

” After that, he started a number of businesses that didn’t last too long and ended with bankruptcy and failure. He kept plugging along, however, and eventually found a recipe for success that worked. From these people we have learned to never give up on our dreams. Earlier I asked a question, “Why do they give up? ” Why do they actually give up? Maybe because they think it is impossible or maybe people around them say that their dream is stupid. Or maybe their parents want them to be what they want and they tend to follow their parents’ dream.

Whatever the reason might be, you should know that you can’t gain anything without trying. You know the saying, “no pain, no gain” right? The commencement speech given by J. K Rowling “the fringe benefits of failure and the importance of imagination” tells us how important it is to dream and never give up plus it also helped us to learn from our mistakes and it’s not a big deal when you fail. You have to work hard to achieve your goal or dream. In her speech she also included the importance of imagination. Take a minute and consider the world you live in.

Well, one thing is for sure – a hundred years ago, the world didn’t resemble the world in which we live in today. Consider jet airplanes. Consider computers and the Internet. These developments just didn’t appear mysteriously on the horizon one fine day. They all are here today because of imagination. Albert Einstein once said that “Logic will get you from A to B. Imagination will take you everywhere. ” which tells us how important imagination is. Finally I would like to say, failing isn’t the end of the world.

Nobody is perfect. So try, try and try again until you finally reach the end of the tunnel. If you don’t go after what you want, you will never have it. If you don’t ask, the answer is always no. If you don’t step forward, you’re always in the same place. If you fell down yesterday, stand up today. An arrow can only be shot by pulling it backwards, when life is dragging you back with difficulties, it means it’s going to launch you into something great. So just focus and keep aiming, and don’t forget to keep imagining. Thank you.

I wish I was the richest person on earth. (2016, Jul 20). Retrieved from https://studymoose.com/i-wish-i-was-the-richest-person-on-earth-essay 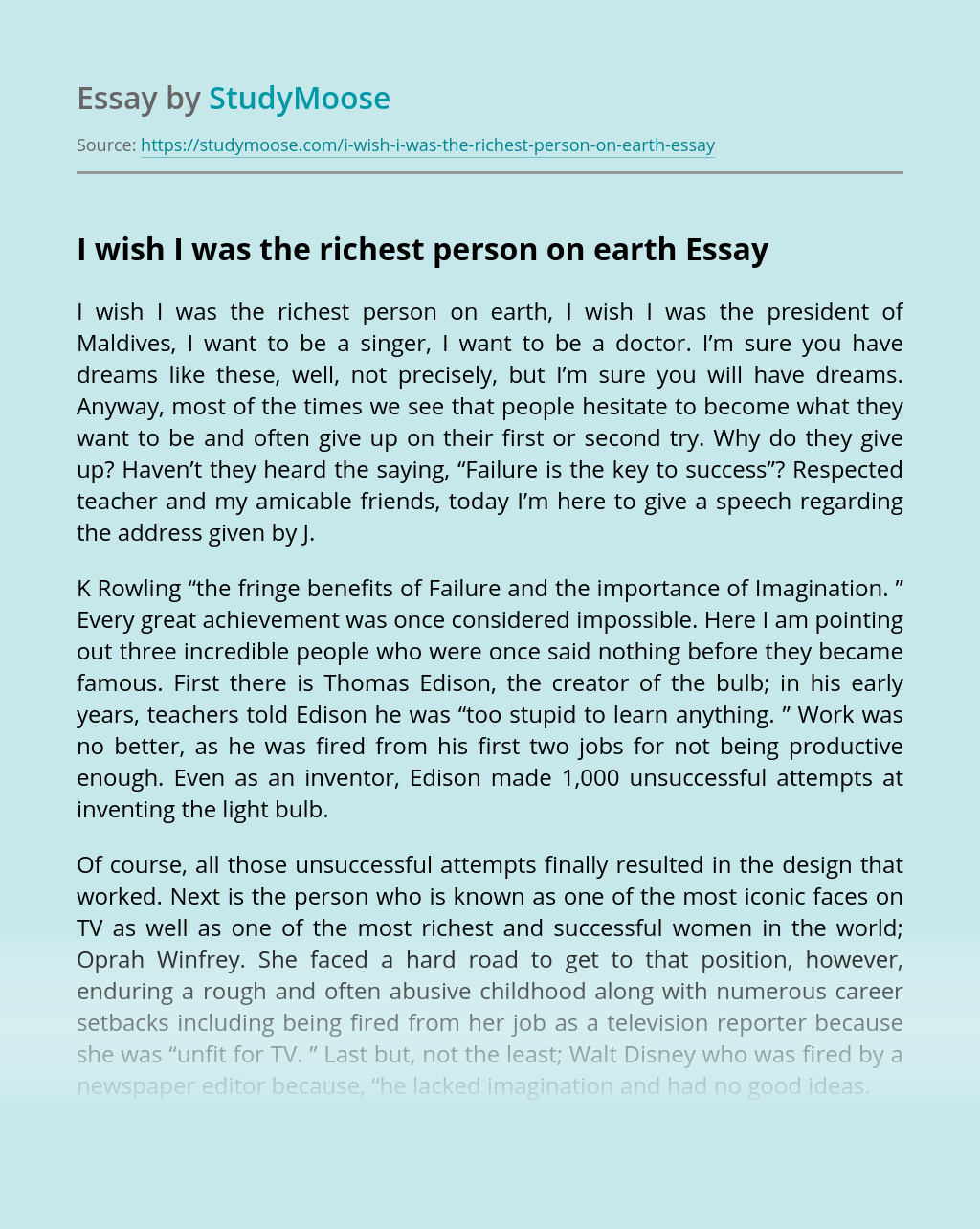