This is a serious issue in many countries and is harmful to humans’ and animals’ health, the environment and also increases pollution (Veziroglu 2007). Now, it is the time to face these problems by using clean energy such as solar, wind and water. Wagner & Mathur (2011) state that hydropower is the most efficient renewable energy, while Veziroglu (2007) claims that hydrogen is the key to the solution in the 21st century. Therefore, this essay will focus on energy sources water and hydrogen. The first part will analyse how to use water to produce a large amount of power in several ways.

Don't use plagiarized sources. Get your custom essay on
“ Hydro Energy as Alternative Energy Resource ”
Get custom paper
NEW! smart matching with writer

The second will discuss the effect of hydro energy. The third point will explain where hydrogen comes from and how to use it. The last section will describe the reason why many researchers and industrialists are interested in using hydrogen power. It is argued that using hydro power and hydrogen energy in many countries can decrease CO2 emissions that are the main cause of climate change and create an amount of clean energy, although these sources of energy have some negative impact and requires high investment costs.

Hydro is a large natural resource that can be used to generate power in different ways. Hydro means water which is a significant power source to generate electricity. Destouni & Frank (2010) state that hydro-electric is a large resource, and it is more stable and reliable than other resources when they are compared. Additionally, the electric can be produced from water by using generator in many ways.

Wagner & Mathur (2011) reveal that there are three ways which are river power plant, storage power plant and oceanic power plant.

Firstly, they state that river power plants create power by the flowing and dropping of elevation of water. For storage power plants, they reveal that they generate electricity when the reservoir allows water to fall from natural resources such as Mountain Lake and artificial resources such as dam. For example, they point out that the biggest storage energy stations is the Three Gorges Dam in China which creates over 25 times more electricity than a coal-fired energy station on the basis of capacity.

Secondly, another power plant uses water from the ocean such as wave, tide and the different temperatures of the sea to produce energy. Furthermore, hydro-energy is the main source of electricity in some countries. For instance, the percentage of using hydropower in Norway, Brazil and Canada are 99, 84 and 58, respectively (Wagner & Mathur 2011). In the future, the global product of hydro-electricity tends to be growth. Destouni and Frank (2010) suggest that it will increase around 20 percent by 2050 for decreasing the using of fossil fuel and carbon emission.

Hydro energy has negative and positive sides that affect human lives. Firstly, all hydro power plants require a great amount of capital. Secondly, river plants produce small amounts of energy compared with other hydropower plants because this type does not use the full flow of the river, so the energy is not sufficient for many households. Thirdly, large dams could lead to floods in the cities which are situated lower than the dams because of overload caused by heavy rain or damage caused by earthquakes (Wagner & Mathur 2011).

Moreover, hydro plants could impact on environment. For example, large dams can interrupt fish’s lives when fish try to swim upstream and deplete natural animal habitat for birds and ducks that have to move to another area as shown in the O’Shaughnessy Dam in the United State which destroyed some parts of Yosemite National Park. Moreover, over one million people were forced to move out their villages when China built the Three Gorges Dam project (National Geographic 2012). On the other hand, there are many advantages of hydro power plants.

Wagner & Mathur (2011) indicate that storage power plants can generate large amount of energy, and when well managed can avoid flooding, and can provide water for farmers whenever they demand because the dams collect water all year. In addition, dams have the efficiency of controlling the water that can begin, stop and generate power immediately. Furthermore, the average cost to invest in this power is lower than the other sources, and it can be used longer than 50 years. For example, the plant in Darjeeling in India is installed in 1897 (Wagner & Mathur 2011).

According to National Geographic (2012), hydropower is sustainable and clean source because of water cycle that water transforms to steam and come back to water again, and no greenhouse gases such as carbon dioxide which pollute into the air so that it decreases impact on environment and reduce the causes of global warming. Another widespread renewable energy is hydrogen which is a basic source which can be produced from natural and artificial resources and can use in many kinds of industries for reducing carbon dioxide emissions. Hydrogen is made from primary sources such as solar, nuclear, water and fossil fuel.

Edwards, Kuznetsov & David (2007) point out that a fuel cell is a device for generating electricity and recharging power by oxidation between hydrogen and oxygen from the air though electrodes and this process will continue until no fuel and air. Therefore, many countries select hydrogen energy to solve climate change problems that are caused by the use of fossil fuel. For example, some countries which are interested in using hydrogen power are the United States and Japan who spend a lot of money investing in hydrogen energy projects both to decrease carbon emissions, and as an alternative power resource (European Commission 2003).

Hydrogen energy and fuel cell have some pros and cons for decision to use in society such as vehicles, aerosol and stationary. The advantages of hydrogen power and fuel cell are cycling of water, low or zero carbon emission, high efficiency and power quality, and low noise. As a result, these advantages will reduce pollution and eliminate greenhouse gases which cause ozone layer depletion. Moreover, these systems are used in wide range such as hospitals, transport, and IT centres (Edwards, Kuznetsov & David 2007 and Veziroglu 2007).

In transport, hydrogen energy has been used in transport because it provides good performance and high convenience such as smoothing and low noise, and also it is used for silent power of airspace and producing high levels of power for advanced soldier uniforms in military program. Furthermore, technology such as computers, telephone and radios also use hydrogen and fuel cell in recent year because it can provide long life batteries. However, it cost a great amount of money to hydrogen project and sometimes it can use in short time just thousands hours (European Commission 2003).

In addition, Veziroglu (2007) reports that some process will produce other gases not only hydrogen such as nitrogen oxide group can cause global warming. In conclusion, the advantage of hydropower is providing the amount of energy that is sufficient for the requirements of every household, and the advantage of hydrogen energy is that it can be used in many industries such as cars and airplanes. Moreover, both of them, which are clean and sustainable energy systems, reduce carbon emissions.

Furthermore, the cost of these kinds of energy will decrease as these systems become more prominent and will be used more widely in the future. Therefore, hydropower and hydrogen energy are likely to be used in the future to decrease the causes of climate change. 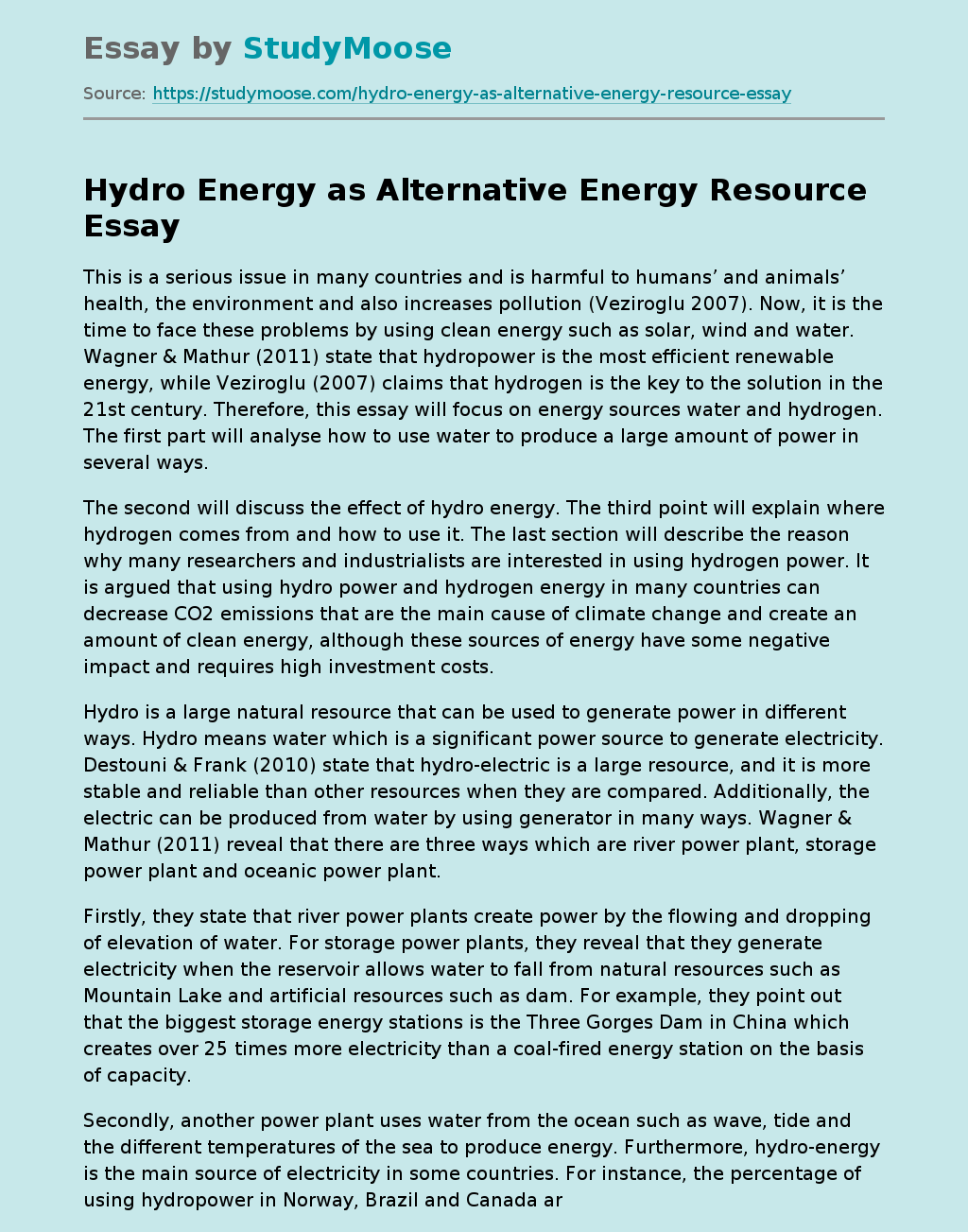