Hurricane Katrina can be regarded as one of the worst catastrophe which was recorded as a national disaster by the government of the United states of America . This disaster occurred in the new Orleans levees, which were destroyed beyond recognition. As result of this Hurricane of Katrina disaster many people lost their lives and properties worth millions of money were destroyed. This Katrina Hurricane occurred in August 28th of the year 2005. New Orleans levees have a long historical background, but in general they were constructed for the purpose of controlling flood in the southern city of Louisiana.

This Katrina hurricane on the Orleans levees has been regarded as the one of the devastating and worst engineering error in the world history ever recorded (Lawrence H, 55-70). This paper tries to bring out the historical perspective of the New Orleans levees, their importance to the society, the reasons why these levees failed to control the flooding problems during the time of the Katrina hurricane.

At the same time this paper will bring out the precaution measures which have been brought out by the government to improve the structure of these levees so as to prevent such a problem in future.

The government of the United States of America has since tried to improve the status of these levees so as to protect any destruction which is constantly caused by the annual hurricanes in the state.

New Orleans can be traced as back as the year of 1718 when it was founded by the French government with the guidance of jen-babtiste. The New Orleans location was being considered as one of the commercial centre since it was strategically located and at the same time, the port transport was used by many colonies for the transportation of the raw materials to their countries. This site was basically selected for the construction of the levees due to the fact that that site was located on the high ground compared with other natural places.

It was actually situated on the lower Mississippi river which was constantly flooding. At the same time this place was selected for the construction of the levees since it was located adjacent to the trading port which was located between Lake Mississippi and pontchartrain. This city was actually considered as the major colonial city of those times. It has been recorded that on the of 1718, when this city was created, the hurricane struck this orlean city although it never caused much destruction (Marshall Bob, 15-32).

This led to the destruction of most of the structures in the city. As a result the administration responded by constructing a grid which are observed up to date. At the times of the civil wars in the south states of Louisiana the levees were constantly destroyed by those who were participating in the wars which had arose as a result of racial discrimination in the state. As a result these levees took a lot of time for their reconstruction as people lacked finances for there reconstruction.

As a result the delta water will constantly over flow and cause a lot of flooding. This led to reduction of the economic status of the state as a result of the reduced tax correction. As a result of the civil wars the levees were abandoned. But at the same time the levee administration system was reconstructed in the year of 1866. This levee administration was empowered by the government to do regular maintenance of the levees and at the same time research on the permanent solution on how to control the future floods in general.

In the year of 1867 there occurred the worst flood in history which stripped lines of levees which were so expensive to construct by that time. These levees were not re build at that year. Consequently in the year of 1871 another flood occurred which forced the government to establish a private company to control the flooding in the state. This company was known as the Louisiana Levee Company. The company was actually established by a special registration which mandated the company to control floods for the period of twenty one years.

Although this company started to carry out its duties many levee breaks were not reconstructed and this made the state to experience constant water overflow which led to much annual loss of properties and reduction of the revenue collection (Westbrook Jesse 53). Most of the levee break up used to occur due to improper foundation preparation. Consequently the ditches were not constructed up to standard because the contractors wanted to have cheaper construction rate. During this period weeds grew in the levees. For instances the levees were used as roads .

Houses were sometimes constructed on top of these levees. But as time went some legislation laws were enacted to prevent the levees from being misused. The Louisiana Levee Company was later abolished by the government due it s poor performance and the state of Louisiana opted to a system of local levee systems which was responsible for the levee construction in their territorial area. Later in the year of 1874, the congress appointed a military commission to establish the permanent solution towards this flooding problem (Westbrook Jesse 53).

This led to the creation of the Mississippi River Commission which proposed the prevention of the erosion and caving of the levees. Although the step to improve the Orleans levees, it was seen as a futile step since some levees in the Arkansas were not constructed in to standard hence leading to frequent exceessful flow of water to the south. At this twenty one century, the Mississippi has started a trend of changing it s course into the New Orleans which has caused great navigation problem. When the Katrina hurricane took place in the New Orleans several damages occurred as the levees were unable to prevent such a strong hurricane.

This has been attributed by both the geographical factors, the construction factors and the strength of the hurricane (Grace King 71-75). Although the location of the Orlean is considered as a geographically magnificent site, since it is situated at the entrance of river Mississippi, this site is not favorable for the resistance of much flooding. This area is so swampy and it is located where the Mississippi river enters it s water in to the Gulf. The main parts of the New Orleans are located on the natural levees of the river Mississippi which has a silt soil.

This soil is not firm and hence would not stand the strong hurricane such as that of the Katrina. Between the rivers, there is a back swamp which lacked solid foundation, hence during the rain season; there occurred a lot of flooding. Most of the New Orleans levees were build on the muck area which lacked the solid foundation hence masking the levees so week during the time of the hurricane. The location of New Orleans is at the low sea level which made it to be flooded easily by the rain water brought by the heavy winds. The soil of the New Orleans could sometimes sink as it was not strong.

The large destruction during the Hurricane times, although may have been contributed by several factors, the problems of the levee architectures have to be blamed. According to Smith (83-90), the engineers who constructed those levees led to much destruction. The New Orleans levees can be regarded as one of the engineering error ever in the history. The engineers had poor construction policies which were attributed by the poor designs. The size of the walls of the levees was short hence they were topped with water hence destroying the foundations of the levees.

During the construction of these levees, public safety was not taken to account and hence not making them stronger. Since the New Orleans city is 12 feet under the sea level, the levees were at risk . During that time the Hurricane of Katrina flowed directly through the islands and the hurricane waves affected the lake severely. Moreover the massive rain which filled the canal up to the top, which later on affected the hurricane and the levees at large. The strength of the storms of the hurricane can be seen as the major reason why the levees would not resist the destruction (Henry Righter, 105-107)

After the Katrina Hurricane in the New Orleans, the government has taken many measures to rebuild the levees so as to prevent any future destruction of properties and human lives in general. During that time the Bush administration got seven million dollars from the United States of America congress for the repairing of the levees covering a distance of 350 miles. This measure was aimed at protecting the residents of New Orleans against the floods which would sometimes extend up to the lake of Pontchartrain and the gulf of Mexico at large (John Smith, 83-90).

At the same times the government has started to fund the projects aimed at restoring some places which were identified as wet lands, which will help to absorb the flooding waters and prevent the hurricanes from coming in to the city. Most of the Katrina damages have been repaired by the administration. At the same time the damaged levee walls have currently been replaced with the T-walls which are stronger. Consequently the transition areas in the levees have been streghtened. Many flood walls have been created. The height of the flood gates has been increased in height to prevent further over flow

In conclusion the Hurricane of Katrina can be regarded as one of the catastrophic disasters in the history of the United States of America. The New Orleans levees have got historical origins. The causes of large destruction can regarded as of originated due to the engineering errors and the strength of the storms. Works cited: Lawrence H. 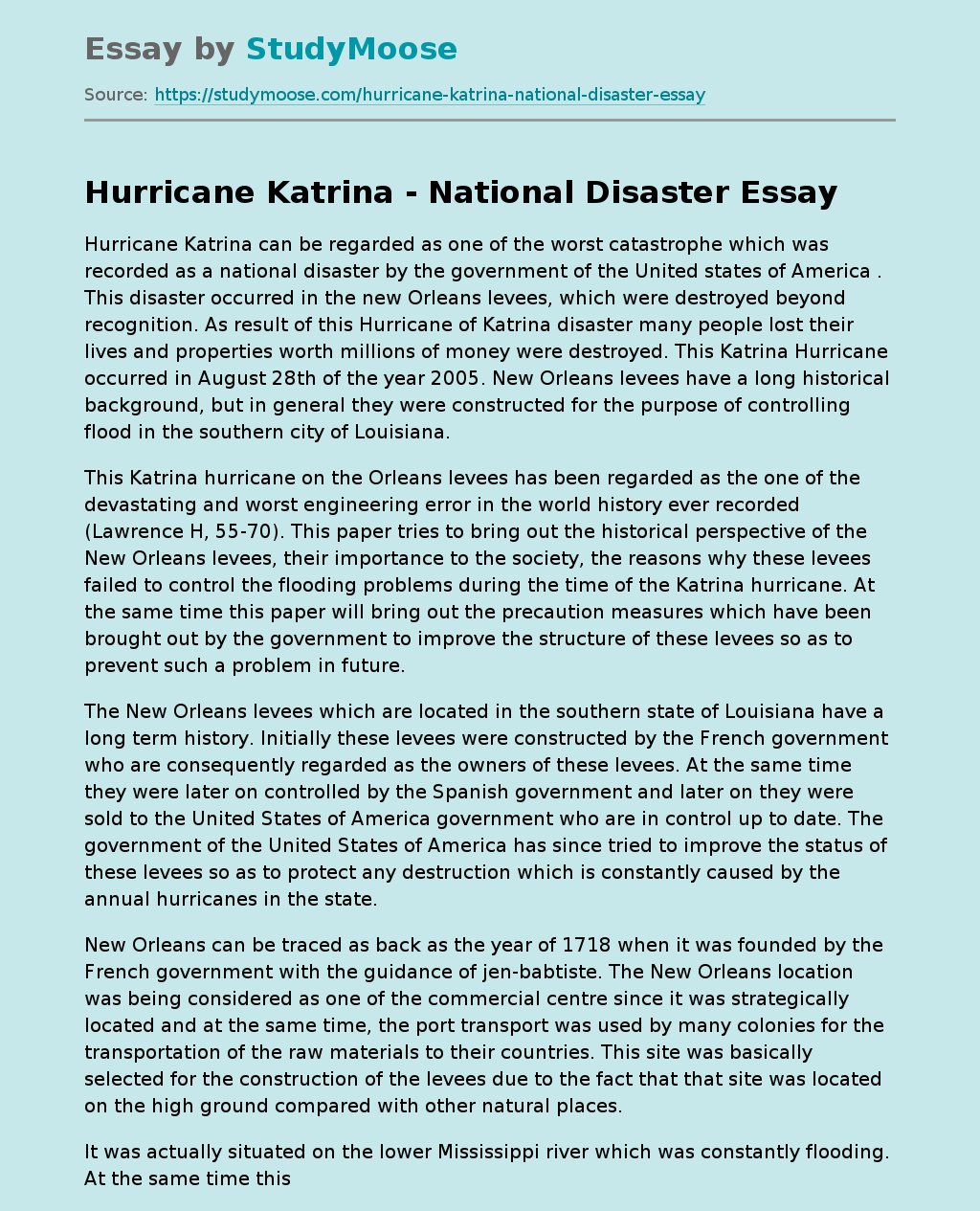