This issue lies deep in the heart of many black people and is indicated when Nichols uses the words “trampled” and “oppressed. ” These two words sum up how blacks were treated. However, Nichols highlights the fact that these are usually stereotypes and that blacks have now broken away from that period. This is repeatedly conveyed in the poem, for example, where it says: “For the abused stereotype already in their heads. ” Here, Nichols is explaining how judgemental others are towards black women, they pity their history and troubled past and don’t think of them as individuals.

Don't use plagiarized sources. Get your custom essay on
“ Hurricane Hits England ”
Get custom paper
NEW! smart matching with writer

Blacks are thought of as a group of people, not having any singularity. Nichols strongly believes that this is not the case: ” black women are like a contrasting sky of rainbow spectrum. ” Nichols uses a simile here to portray there are different shades of black. By using the word “contrasting,” a contradiction is implied, and she is saying that black women are just like any other women.

This is emphasised when she says: “Of a black woman, or a white woman, or a green woman” Here, Nichols is expressing the insignificance of colour. These three lines are a crucial part of the poem.

The fact that these lines are repeated and indented tells us how strongly Nichols feels about the injustice of stereotyping. In “A Roll of Thunder Hear My Cry” the general portrayal of white people is negative. There are many parts in the book that imply that black people were treated like second- class citizens.

Like Cassie’s confrontation with Lillian Jean (a local upper class white girl): “I am who I am and you are who you are. ” Lillian Jean then replies: ” Well I’m glad you finally realised the way of things. ” Here is a prime example of a typical white person’s attitude in Mississippi in the 1930’s.

There is a definite segregation in society. Blacks and whites lived in largely polarised communities with clear demarcations between them. Cassie is a fighter, like her mother in many ways but more nai?? ve. She manages to get justice with Lillian Jean, this is a crucial point in the book where the situation has reversed and finally there is evidence of some form of even-handedness. Cassie has inflicted some form of control on a white girl and her contentment is evident when she says: “she apologized. For herself and for her father. For her brothers and her mother.

For Strawberry and Mississippi, and by the time I finished jerking her head she would have apologised for the world being round had I demanded it. ” The exertion of power is not by some one who is rich and white but someone who is middle class and black. Equilibrium is reached which promotes impartiality, the insignificance of colour in humanity. This is a substantial issue in the novel, perhaps the most vital one. Taylor had used Lillian Jean, a high-class white girl and made an example of her, to show how the treatment of black people was unfair, trivial and in some cases traumatic.

In the fifth chapter of the book Cassie is forced to apologise to Lillian Jean simply for standing in front of her: “You can’t watch where you going, get in the road. Maybe that way you wont be bumping into decent white folks with your little nasty self. ” Here, we can understand why Cassie longs for revenge. The spitefulness of Lillian Jean’s words and the demands she makes upon Cassie are horrendous and unjustified. She makes Cassie feel so inferior to her simply because she is black, this is emphasised in the two contrasting words “decent” and “nasty. ” These words simply meaning white (decent) and black (nasty).

In my view this shows the difference in thought between white and black people of that time, white people considered themselves to be of a higher status, with more wealth and control. Black people viewed white people simply as racists, people who were their equal but have more power and so had to be treated with more respect. As readers we empathise with Cassie and the whole concept of racism. This is evident in Misty Pitts review of the book: “Anyone who reads this book acquires a new “appreciation” for the black people’s heritage and also feels shame for how people used to think.

” Grace Nichols’ poems also highlight the gap between whites and blacks. However, Nichols’ poetry is written is from personal experience as a black woman who has lived in both her own native country (Guyana) as well as a western white dominated country (England). In A Roll of Thunder Hear My Cry only Mississippi is mentioned. A poem that accentuates the difference between Guyana and England is “Like A Beacon. ” Beacons are signals used to warn ships and aircraft of danger. As the readers we then assume that this poem is written about some kind of unhappiness.

In the first stanza it says: ” get this craving for my mothers food. ” Nichols is alluding to a complex thought but describing it in an unpretentious way. This is portrayed in the word “craving”; a craving is to have an overwhelming desire for something. Most people use it in the context of food as Nichols has here. We then find it easier to relate to what she is saying. It is as though she is choosing between England and Guyana:” I leave art galleries in search of plantains salt fish/ sweet potato. ” It is patent which one she prefers.

She is saying she would leave England and its culture (“art galleries”) because she craves for her own culture (“salt fish/sweet potatoes”). Her uncertainty is expressed in the single line ” I need this link. ” This line is placed in-between two stanzas as she is stuck in-between two cultures. She belongs to one and lives in another and there is no “link” between the two. Her yearning for her own, for her roots for her true identity is severe; the intensity of her feelings is signified in the last stanza: ” I need this touch of home. ” England is not what she considers to be her home.

The word “need” is vital as it differs from the word “want” when you want something it is a aspiration, but when you need something it is a necessity, you have to have it to survive. The message Nichols is conveying here is that you need your own culture, need to feel at home, need to feel comfortable with your surroundings. The same implication is evident in “Hurricane Hits England. ” This title also expresses some form of danger but this danger is conveyed as positive danger. This is shown many times in the poem: “The blinding illumination, even as you short-Circuit us into further darkness?

” Here, she has described the hurricane as a “blinding illumination”, she is admiring its natural beauty as it reminds her of her home country where hurricanes are a regular imposition. At the same time she knows that it is a natural disaster and that it can have a disturbing effect on people and this is portrayed in this stanza where it says “darkness. ” As in Like A Beacon she is specifying two contrary states of mind, this underlining her inner confusion. Both writers use natural objects to convey vital issues. This is perhaps more obvious in Grace Nichol’s “Hurricane Hits England. 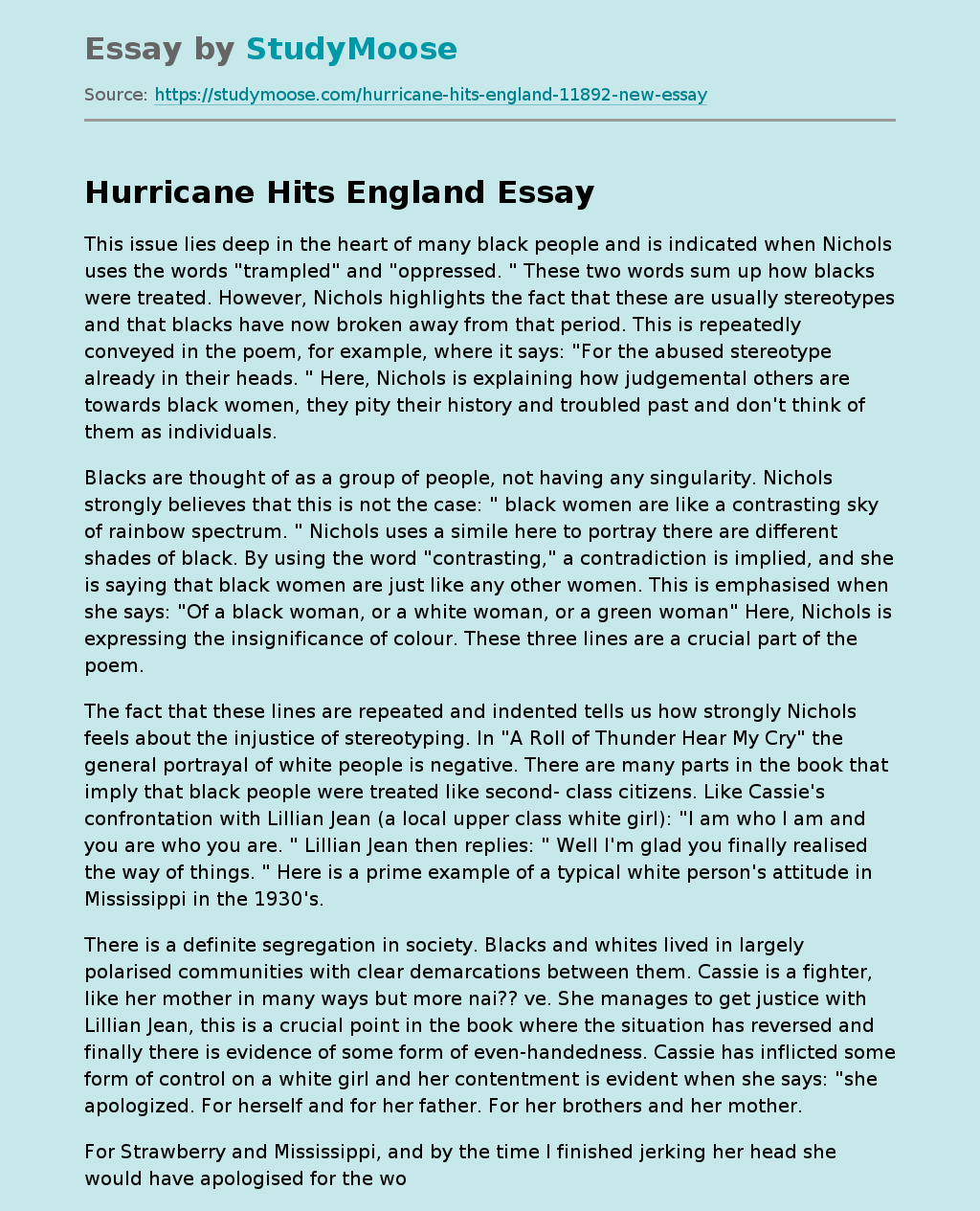