Humor in A Village Cricket Match

It is an excerpt from A.G Macdonnel’s humorous novel ‘England, their England’. The English society has been satirized in a light hearted manner especially what is known as ‘Englishness’ , as seen from the eyes of a Scotsman. In this the author humorously describes a cricket match being played between men from England and men from Scotland in the village of Fordendan.The cricketers are petty businessmen or local shopkeepers. The story is presented in a mock epic style and ornate and bombastic language has been used to bring out this effect.

Don't use plagiarized sources. Get your custom essay on
“ Humor in A Village Cricket Match ”
Get custom paper
NEW! smart matching with writer

The author has used humor as the main ingredient of the story. His description of the players, their style of playing, movements, and conduct is humorous. The story begins with the arrangements of Mr. Hodge who completed his tricky negotiations with the Fordendan caption. Just as the two players who were arranged to play for both sides went away in dismay, a motor car arrived containing not only Mr.

Proficient in: An Interesting Cricket Match

Hodge’s two defaulters but also a third gentlemen who swore stoutly that he had been invited by Mr. Hodge to play. Negotiations therefore had to be reopened.

This funny arrangement at the beginning of the story underlines the streak of humor which will run throughout the story. The method of winning of winning the toss by Mr. Hodge is described in a humorous way.’Mr.Hodge having won the toss by a system of his own founded upon the differential calculus and Copernican theory…’.The bowling end of the ground was so steep that at the end stood a fielder who saw nothing saw nothing of the game but the blacksmith walking back or running to bowl.

It was only during the last few yards of his run when the blacksmith was visible to the batsman. The blacksmith ran up to bowl climbing the slope superbly like a ‘mettlesome combination of Venus and Vulcan Anadyomene’. The manner in which each ball is described is hilarious. The first ball which the blacksmith delivered was a high full pitch to leg of appalling velocity. It probably fell on a bare patch of land and rocketed off at the first bounce four byes were reluctantly signaled by the village umpire. The second ball went full pitch into the wicket keeper’s stomach and there was a delay as the deputy wicket keeper was invested with pads and gloves to take over his charge.

The third ball, making a sound like partridge, would have hummed past Mr. Livingstone’s left ear had he not hit a six. The fourth ball took his leg bail with a bullet like full pitch. The description of the professor also provokes laughter .The young professor of ballistics was muttering about the muzzles and velocities of a gun. The author makes it humorous by saying that a player is more interested in the velocities of a gun than the game. Humor also lies in unexpected disclosures. Boone was looked up to by everyone as he was a Cambridge Blue. He was easily stumped at the first ball. Donald was puzzled as to how such a marvelous cricketer played a terrible stroke.Later it was revealed that Boone has received his Cambridge Blue for rowing and not for cricketing. Contrast in the personality and requirements of the rough game also give rise to humor. Robert Southcott was small and quite. He was attired in whit flannels, pale pink shirt, white silk socks and white cap. HE did not interact nor drink much.

There was retiring modesty about him which made him very noticeable in the team. He looked so fragile that a fast bowl would knock off the bat from his hands. He held the bat in his hand as if it were a flute or a fan. When Mr. Hodge advised him to play carefully, Donald is amused. Again the humor of the story is brought out since the man whom the captain is advising not to score runs will already not do so due to his fragility. But Robert Southcott played dexterously hitting several sixes. Another incident which is comical is when the blacksmith is when the blacksmith is running forward to bowl with such an irresistible momentum that he himself loses his balance and falls on the ground, twisting his ankle and knocked up a cloud of dust and dandelion seeds when Mr. Harcourt, the umpire, yells ‘No Ball’ in his ear deliberately .As a result the blacksmith loses his wits and falls.. The ball flew out if his hands and hit a third slip on the knee cap like a bullet who yelled like a stork before tripping over a tussock of grass and falling on a bed of prickly needles inducing him to cry even louder.

That an American journalist, Shakespeare Pollock, who is a baseball player, has been roped in to play cricket ads to the list of humorous incidents. When he received the first ball he hit it, threw the bat on the ground like in baseball and began to run in the direction of cover point. He stops in his tracks when he notices how everyone is staring at him in horror and wonder .One can picture the scene as it is extremely funny. There also lies humor in small incidences, like team work being satirized by the author constantly when Pollock is being explained the rules, or the reactions of spectators when the umpire declares four byes and they decide to take mild pints.

The urchins trying to find the ball with bamboo and bucket also provide humor. Thus the whole story is laced with humor. The title of the story is apt as it vividly, humorously and minutely describes a village cricket match. The main aim of the writer to provide fun through as series of humorous situations is fulfilled. The analogies used by the poet are epic similes where the ordinary actions are compared to great actions from mythology. With details of description and comical situations the author has succeeded in bringing out the humor of the story.

Humor in A Village Cricket Match. (2021, Nov 08). Retrieved from https://studymoose.com/humor-in-a-village-cricket-match-essay 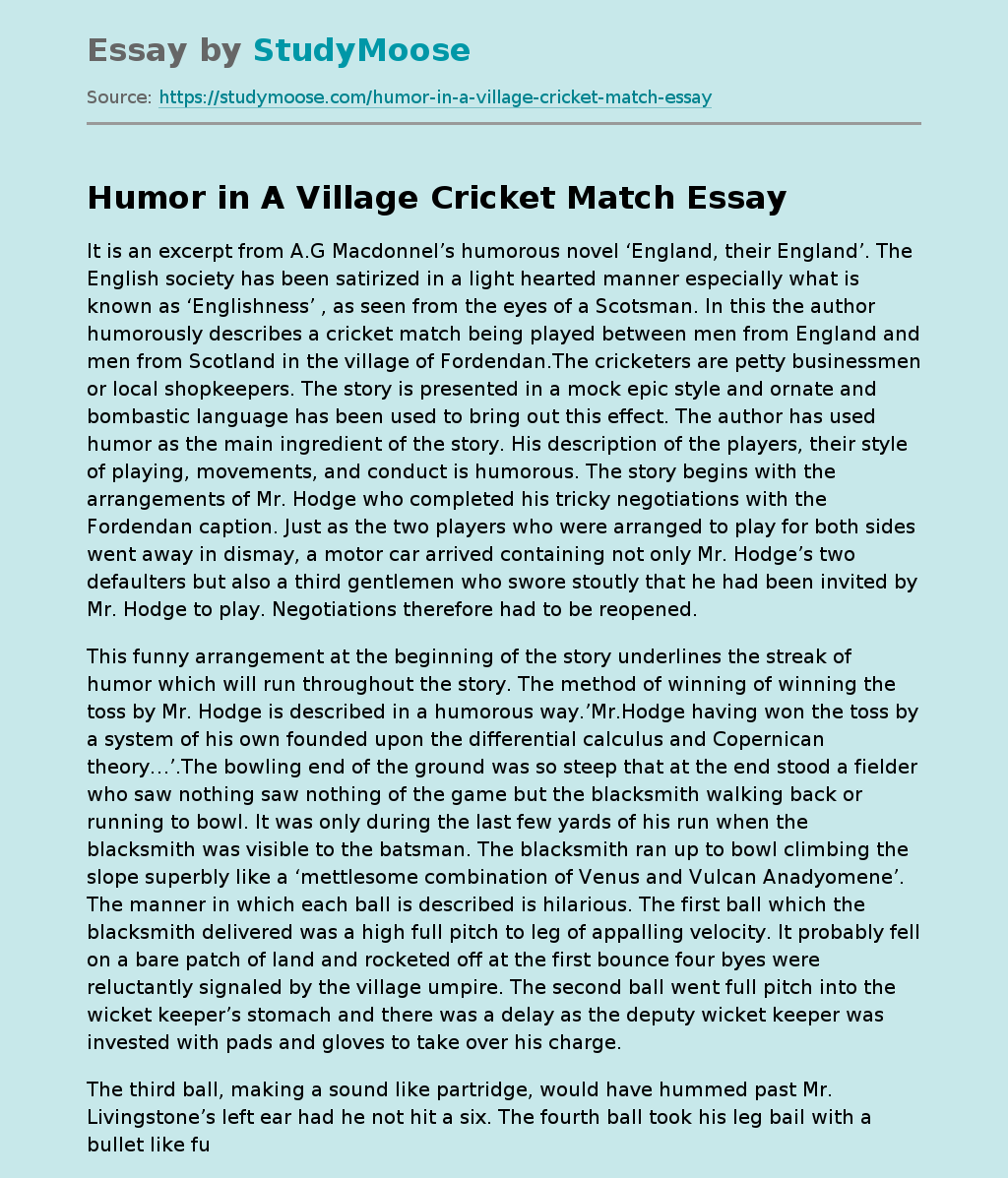