Virtues consist of a set of character strengths, these strengths represent good character. They are wisdom, courage, humanity, justice, temperance, and transcendence. Wisdom and courage are two virtues that my Grand Father encompassed. He was a very strong and knowledgeable man. His life revolved around going against all odds, he truly believed in beating whatever he was at battle against. His perseverance was with him till the day he died. He passed away at the age of 65, he wasn’t that old, yet he was a very wise man.

Turn in your highest-quality paper
Get a qualified writer to help you with
“ Human Virtues ”
Get high-quality paper
NEW! AI matching with writer

His personality was filled with love, care and compassion for others. Very open-minded, when he met someone he was the one who always found the good in them, no matter who they were. If a situation would arise, he never just considered what was likely to occur, he looked at the “whole” picture. His love for learning was obvious, one of his hobbies was reading. When asked why, he would reply, “the more you read, the more you know”.

He was a stickler for making us do well in school.

He wanted each of us to have a good education to build our lives out of. He was a Lieutenant in the Federal Prison System for 25 years, after retiring from the Army, his life here was to provide for and protect his family, which he done with a happy, energetic, and determined attitude. His gratitude for life was amazing, he taught us all the meaning of Live, Laugh, Love. He walked this life on faith, while teaching others how to do the same along the way.

Although his life at home was well rounded and energized by his love, his life at work was a very emotional one. It became as if life in prison, was life for him too. He developed emotional attachments to the inmates, He cared for them, he knee their situations, and he knew why they were there. His courage allowed him to become involved in their lives, which paid off in his favor the night he and some others were held hostage in Virginia Federal Prison, by a convicted serial killer.

Yet once again, he put forth is faith, his knowledge and courage and talked the inmate down. He helped release the others, and saved many lives includ8ng his own. Wisdom and courage I think are two virtues that we all should possess. I try to live by good character, I think back on all of the talks me and my Grand Father had, and all the years in between. I smile and think to myself, “yes, I sure wish I could be just like him”. 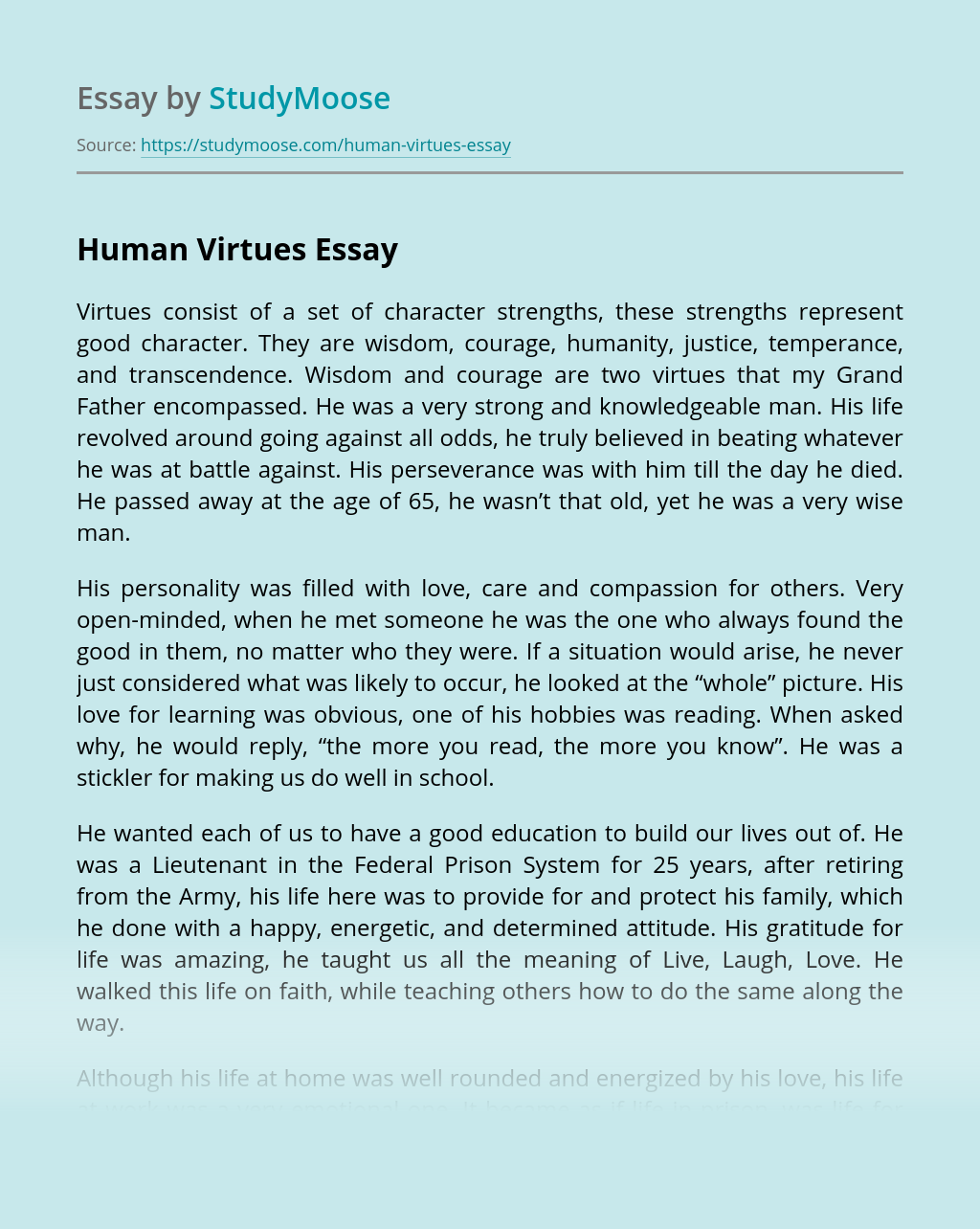 Turn in your highest-quality paper
Get a qualified writer to help you with
“ Human Virtues ”
Get high-quality paper
Helping students since 2015
Stay Safe, Stay Original