How was the transatlantic trade organized? Who participated and who profited

The transatlantic trade began as the first global age started; it was a period of global unification and urbanization. The transatlantic trade was organized between the peoples of Europe, Africa, Asia, and North and South America. Different regions called for different empires from each continent. The ottoman Turks in Europe and Western Asia, the Ming dynasty in China, the Aztecs and Inca in the Americas, Mali and Songhai in West Africa, and the Mogul Empire of Akbar the Great in India.

Don't use plagiarized sources. Get your custom essay on
“ Human Trafficking in Time of Transatlantic Slave Trade ”
Get custom paper
NEW! smart matching with writer

The first we see of transatlantic trade was perhaps the Columbian exchange. People, goods and invisible items such as jewelry, spices, meats, game, and furs were transported west from Europe and Africa to the Americas and then east across the Atlantic. A main invisible item was disease, and no one profited from this horrible trade. Slave trade became prevalent in the Transatlantic trade and were sold in part of a triangular trade as merchants carried goods from Europe to West Africa where they exchanged them for slaves, the slaves were then sold in the Americas and the proceeds were used to purchase new raw materials to be brought back to Europe where the cycle would begin again.

In my eyes I believe that everyone profited to a degree, for example, the Chinese were a civilized culture and the Europeans learned much about government, and philosophies, religions such as Buddhism and Confucianism interested them and Chinese Porcelain and lacquered furniture made its way into the European households of modern decoration.

Kings and wealthy nobles used the Chinese garden and landscaping design to create incredible works of art out of plants and trees.

Other products became a part of European life, potatoes, coffee, tea, corn, beans, and fruits not known to them such as Bananas and pineapples dazzled them. Woods, metals and the ever popular tobacco also followed. The other cultures also greatly prospered in several aspects. Africa although they suffered were exposed to new technology on a limited basis, the arrival of slaves in the Americas allowed for plantations and colonies to flourish with the added help. Barter systems allowed for exchange of new ideas, products foods and herbs. The world was becoming industrialized.

A major part of the Transatlantic trade was the slave trade. It began and lasted from 1500-1800 and began as an increasing demand for slave labor in South America and the West Indies. Africa was desperate for population, but that did not stop the small royal and commercial elite that benefited from the export of slaves. While Europe seemed to be a major influencing factor of slave trade, they scarcely penetrated the African interior. Slave trade was a huge impact on certain regions particularly the coastal shores and other areas accessible by boats and other modes of transportation. Plantations and other farms required laborers which gave rise to the import of slaves from Africa to other areas around the world.

Slavery began in the 15th century and started with the Portuguese as they explored the ocean in search of a route to India. They explored the African coastline and would capture and sell hundreds of thousands of slaves to South America. The slave trade became a business which would prove devastating to Africa. Other countries joined in the transatlantic slave trade which hurt the population of Africa even more.

Participants ranged from the English who was a leading prospector in slave trade from 1690-1807. Before them the Portuguese ran the trade routes from 1600 onward. The French and also the Dutch took part in the slave trade as well. By 1810 the decline of slavery had started however the search for slaves struggled on, traders pressed further into the middle regions of Africa, looking for more workers to man the fields. Areas of Africa that had the power of weapons such as guns held other Africans hostage. This turned their own people into slaves, selling them off to agriculture. Profits went into the pockets of slave traders and also the people whom bought the slaves. Goods as well as money were exchanged for slaves. The main profiteers were the slave traders and the people whom bought them. 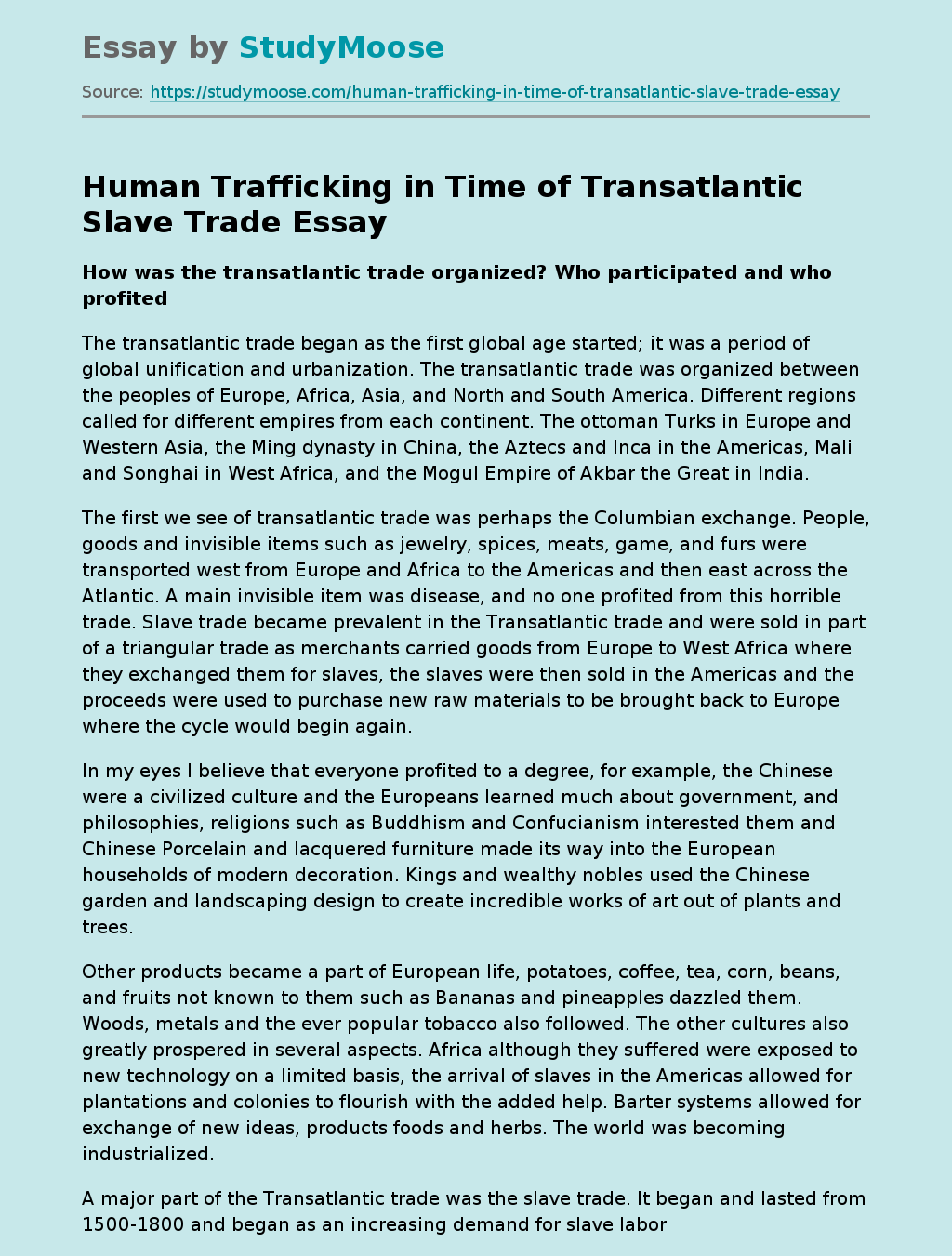