Self-interest is the most powerful force in the world. We often act as we see fit, actions that will benefit us on a personal level. This often means disregarding how our choices consequent other people, other societies, other fellow men. Because we are one selfish, kind of species, which are inclined to act upon selfish desire. Freud saw this cognitive behavior in humans, which is why he deliberately tried to prove this through our id and egos. We rationalize with our behavior, and ultimately prevail with response to society.

Don't use plagiarized sources. Get your custom essay on
“ Human Nature, Civilization and Society ”
Get custom paper
NEW! smart matching with writer

We are restricted by civilization.

Freud believes human nature to be corrupt and driven by self-interest. The actions we make are determined by our id and our superego, which are always in the midst of debate. Rationality and instant-gratification. We act as we see beneficial to us, the way society might see us, and in general what might bring us more pleasure. However, Freud also points out that we are restricted by civilization. He describes that we will never be able to achieve full control of our egotistical desires because our supply is ultimately severed by society’s norms and rules. For instance, in Freud’s philosophical piece on Civilization And Its Discontents, he explains that “the community grows and each of us becomes deeply dependent upon it at many levels..” In other words, in order to live together in a community each of us is forced to deny some of the basic and fundamental instincts of being loved, having security and being able to act upon our aggressive desires.

Freud introduces what he calls a ‘digression’. Actually, this digression is the ground of his entire analysis of civilization and its failures and possibilities. The digression is on the nature of love and happiness and what makes it fail. Humans are fundamentally seeking happiness (ultimately a selfish desire), following a profound, deep, ancient and irresistible instinct. Happiness is first and foremost survival and the avoidance of pain and then the pursuit of pleasure. However, two central desires are active in humans above all others, the desire to be loved (quite different from the desire to love) and a strong tendency toward aggression in pursuit of these ends. The main argument being that we are restricted, and therefore, cannot always act in selfish ways. Instead, we often rely on our superegos, to make a call on what would seem more rational in social circumstances. We are constantly grounded by implied rules of our very culture, on what is appropriate in groups and civilization. We do not enjoy this. We hate the idea of having to follow rules because it does not correlate with our personal hunger for instant gratification.

Furthermore, I would like to talk about this in regards to Ursula LeGuin’s “The Ones Who Walk Away From Omelas”, because we can see a clear connection to Freud’s believes in a contextual example. There isn’t a traditional plot here, except in the sense that the story explains a set of actions that are repeated over and over. I believe the principle of the parable, tells a tale of how we function in the world. In biology, for instance, parasitism refers to the relationship between species, where one species, the parasite, benefits at the expense of the other. This is what I saw in regard of The Ones Who Walk Away From Omelas, the instinctive drive of many villagers, had caused them to turn a blind eye to the suffering child, to continue to live in a happy manner. This had represented the Freudian outlook on the situation, and the expression of the id. While the ones who had walked away, had supported the moral sense inclination. Some might say that they were the ones that had acted with the innate intent to do the right thing, even if it had not benefited them. I however for one believe that in retrospect; those who “walk away” may not be such a positive thing, as they are still doing nothing to help the child in question. If they really were benevolent they would upset the natural order of things and save the child. This just goes to show how human nature can manifest to be cowardly, once again in the appeal to our id. Because we do not want to inflict pain upon ourselves, and in most cases would prefer just to avoid the situation as a whole. We have seen this throughout history, with the child in the basement being a symbolic remark for a lower, minority group of people, who suffer for the benefit of those who have power over them. Why are we like this? Freud argued that we are simply wired this way. In actual fact, Freudians would agree that we were off happier living primitive life as we once knew it because we were free from the obligations of society.

Wilson’s psychology as mentioned in the previous paragraph compares the ideals of the individual, with those of the group. These principles vary from those of Freud, so let’s discuss how the two differ. Wilson tries to make an implication that inherently, all people are born with a passion for good, and the doing of good deeds. We learn to observe many levels of morality from family, as well as early experiences growing up. We as people are driven by good. Sometimes we carry ourselves through life, and we pick up layers of bad along the way. That is undoubtedly what changes our own morality. The moral senses is our indication of what we see as right and wrong, call it the mechanism which tells them apart. For which our righteous nature is masked by the layers of unrighteous filth built up over time. Wilson disagrees to Freud, in the regard that he argues society to be the reason of corruption in an individual, rather than what limits his heinous behavior. He denies the individual’s natural inclination to be a part of his own corruption, his own selfishness, his own scummy regard. This makes no sense because society is made up of individuals. Individuals who in one way or another influence each other; however, still remaining individuals. In continuation, proving that not all individuals are naturally, inclined to commit good actions.

In conclusion, Freud interprets that societies have a specific function and are sustained, by limiting us on the things we most desire. For which we are forced to live as civil people, maintain our jobs, and create families. We cannot receive what we desire, at any rate, without a given sacrifice. We will never truly acquire happiness at its true potential, as we are promised by natural rights, while civilizations are still intact. The id is always suppressed with the superego, whether it be in our heads or society as a whole. Society puts a cap on the things we want, through societal norms; rules of such. We hate living like this. Because our id cannot stand to wait for all the fancy things in life such as expensive cars, lustful desires, possessions of the highest quality, the list continues. Freud says that this make believe scenario will never be fruitful as long as we have a form of civilization. We do our best to strive in an often hostile world, to create the greatest amount of personal happiness and avoid pain as best we can. We stick to selfish regards while having to share, even if ever so slightly, to benefit ourselves in the modern society. 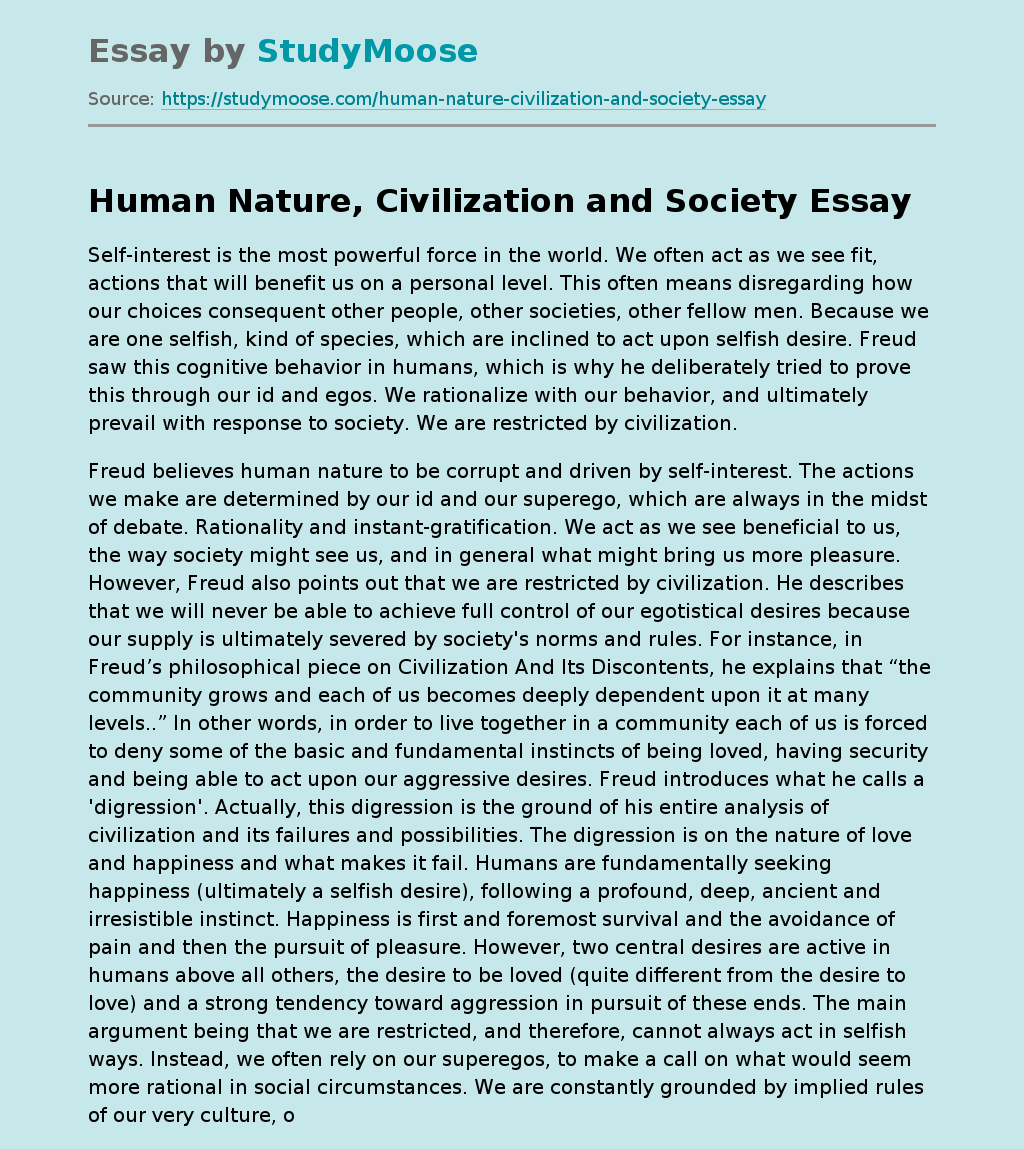