People are the most important element in an organization whether it’s a business enterprise, a school, an army or hospital. School administrator and supervisors must be prepared to deal effectively with the people involved because they have the most difficulty in understanding and dealing with the human elements of administration. The administrator must understand certain fundamental concepts of motivation. He must have an insight into the nature of authority and influence. And most of all, he must have the ability to analyze specific problems and to carry out his intentions successfully.

Technical skills, administrative skills and human skills are the three kinds of skills a successful administrator must possess. * Technical Skills – pertains to methods, techniques and processes. * Administrative Skills – ability to see the organization as an entity and the interrelationship of its various parts * Human Skills – refers to the ways of dealing effectively with people.

*Skill in implementing a plan of action.

It is said that man is a wanting animal. As soon as one of his needs is satisfied, another appears in its place. Man’s needs are organized in a series of levels or a hierarchy of importance according to the theory of Maslow.

Psychological needs – to be alive and to stay alive.

Safety needs – to feel safe from accidents or pain, from competition or threat. of his behaviour. Ego needs – relate to one’s self – esteem and one’s reputation.

Self – fulfilment needs – for continued self – development, for realizing one’s own potentialities.

Understanding basic needs of an individual is important for the administrators and supervisors because deprivation of those needs has behavioural consequences on the part of one’s individual. It is also important to understand because of the fact that an individual whose lower level needs are satisfied, he is not any longer motivated to satisfy his psychological and safety needs. Rather, he shifts towards the satisfaction of the other needs in the hierarchy. Unless there are opportunities at work to satisfy these needs, the individual is deprived and his consent behaviour will reflect the deprivation.

A New Theory of Management

Proposition on the theory of new management’s task by McGregor harnessing human energy to organizational requirements are stated as follows:

1. Management is responsible for organizing the elements of productive enterprise – money, materials, equipment and people – in the interest of economic needs 2 A process of directing peoples efforts, motivating, controlling their actions and modifying their behaviour to fit the needs of the organization 3. It is the responsibility of the management to recognize and develop the individual’s potential for development, his capacity for assuming responsibility, his readiness to direct behaviour toward organizational goals. 4. The essential task of management is to arrange organizational conditions and methods of operation in order to achieved desired goals and objectives.

New theory of management relies on self – control and self – direction; it treats people as a matured adults and it is management by objectives, Advantages
1. it does not involve the relinquishing of leadership, the abdication of management or the lowering of standards 2 it is a process of creating opportunities, encouraging growth, releasing potential, removing obstacles and providing guidance Some applications of the new theory:

1. Decentralization and Delegation – freeing people from too close control of conventional organization. 2. Job Enlargement – encourages the acceptance of responsibility at the bottom of the organization. 3. Participation and Consultative Management – people are encouraged to direct their own creative energies towards organizational objectives and giving them some voice in decisions. 4. Performance Appraisal – individuals are involved in in setting targets and objectives for himself and in a self – evaluation of performance semi – annually or annually.

THE ADMINISTRATOR OF SCHOOL FINANCING

The welfare of the state depends largely upon the education of its citizens. Filipino people recognized the importance of sending children to school whenever and wherever possible. Our leaders and framers of Constitution see to it that the Magna Carta contains a provison that the state should establish and maintain a complete and adequate system of education and provide at least free primary for all education of school age.

Since school population keeps on growing and the salaries of the teachers are keep on increasing, more and more funds are needed. However, present financial capability becomes inadequate and need to augment financial resources to keep up with increasing educational needs. In general, the sources for government income for education are the following:

1. Taxes imposed by law for the support of the government such as the real – property tax, specific tax, and import and export taxes. 2. Tuition fees imposed on students in public high schools, vocational schools, regional normal schools, and chartered colleges and universities. 3. Matriculation fees collected from public secondary school students, vocational schools, and chartered colleges and universities. There were also a matriculation fee charged in the intermediate grades but the fee was abolished by R. A. 4092 effective the school year 1964 – 1965. 4. Rental for lease of school sites and sales of schools products. 5. Land grants and donations. 6. Voluntary contributions. 7. Special fees such as miscellaneous fees charged from college students for entrance, registration, library, athletics, and laboratory, medical and dental clinics, school paper, diplomas, graduations and R.O.T.C.

The Educational Act of 1940 which nationalized the support of all elementary schools in municipalities and municipal districts saved the situation for the poor communities. The Educational Act of 1940 forbids the collection of tuition fees in the intermediate grades although it permits the matriculation fees in an amount to be determined by the President not exceeding two pesos for each pupil enrolled in the intermediate grades in municipalities and municipal district.

The proceeds from this matriculation fee accrue to the fund of the National Government to purchase of library books and equipment and 40% for financing athletic activities in the intermediate grades. While the acquisition of school sites and construction of temporary school buildings remain the responsibility of the local governments. The law abolished the share of municipalities and municipal districts in the internal revenue collections, percentage taxes on the agricultural products and income tax.

The financial support for the maintenance and operation of public secondary schools provided for by the provincial and city governments. Generally, the majority of provinces do not have adequate funds to support the schools properly. This deficiency in finances gives occasional difficulty in the payment of secondary teacher’s salary.

The sources of provincial income are the following:

1. Tuition and matriculation fee levied by the Provincial Board on all high school students 2. Board uses parts of its general fund in case of shortage or the Board passes a resolution increasing the rate of tuition 3. Through the enactment of R. A. No. 3478, the National Government has been granting annual national aid to general provincial and municipal high schools beginning with the school year 1963 – 1964, primarily intended for salary adjustments of teachers and other secondary school personnel 4. Voluntary contributions and donations by private individuals and civic organizations

Support of barrio experimental high school, the Bureau of Public Schools in its Memorandum No. 86, issued on August 1, 1966, states as follows:

1. The tuition fee to be charged should not be less than ₱80.00 a year. 2. 50% of the 10% real estate tax proceeds allotted to barrios in accordance with the revised Barrio Charter should be set aside and used solely for the improvement of instruction in the barrio high schools. No amount accruing from this fund should be spent for salaries of teachers and other school personnel. 3. All feeder barrios should share the expenses for the improvement of instruction, the share of each to be proportionate to the number of students from the feeder barrios attending barrio high school. 4. All resolutions of the barrio councils regarding the funding of barrio high schools should be approved by the Municipal Council concerned.

1. Tuition fees and city funds  2. National Government allots lump sums as aid to cities for their educational needs. 3. National aid for salary adjustments of teachers and other secondary school personnel. The law was amended by R.A. No. 4128so as to include all city high schools except Manila and Quezon City.

Vocational schools usually come under two categories – the provincial trade school and the provincial agricultural school. The source of income comes
from the national contribution, tuition and other fees and income from school products. The so – called rural high schools which are agricultural in nature are jointly supported by the provinces and municipalities and the National Government.

Regional normal schools are also national like the vocational schools. There are still seven regional normal schools located in strategic places in the country serving the needs of the students in the surrounding places. Sources of income of these schools are national contribution and tuition fees. The city or municipality where they are located may also appropriate funds for the normal training department.

The Philippine Nautical School located in Pasay is supported entirely by the National Government which offers courses for employment as merchant marine officers. The School for the Deaf and Blind under the Bureau of Public Schools is supported by the government with occasionally aid from the Philippine Charity Sweepstakes.

The support of chartered government institutions like University of the Philippines comes from the tuition and matriculation fees of students and comes from national funds appropriately annually by Congress. Special aids for the construction, repair and improvement of the buildings are given in special legislation or taken from the pork barrel fund. The tendency of the request by these institutions is to increase every year. Thus, the burden of the National Treasury for the support of these schools keeps on increasing.

Other Agencies in helping the Financing of Public Schools

A number of foreign agencies give some material aid to the schools aside from the National Government. Among these agencies are the following: * AID – NEC – provided in 1966 appropriations for buildings including the constructions of dormitories and also for typewriters, mimeographing machines and professional books for the Bureau of Public Schools. * UNICEF – gave aid in kind such as educational kits, globes, tape recorders, laboratory equipments and vehicles. * The American Foundation for Overseas Blind – donated Braille type writers, paper headsets, etc. * The Pilot Applied Nutrition Project (Bayaribang) – is a joint venture of the United Nations Children’s Fund (UNICEF), The Food and Agricultural Organization (FAO) and the World Health Organization (WHO).

These entities gave help in the form of technical services, training stipends, vehicles for supervision and various types of supplies and equipments for kitchen, laboratory and agricultural uses. * The Agency for International Development (AID), National Economic Council (NEC), and the Bureau of Public Schools (BPS) – jointly undertook a textbook production project which started on July 1, 1960 and terminated on June 30, 1965 to help solve the problem of lack of textbooks. The project was expected to print and distribute around 25 million of copies of textbooks within a 5-year period at an estimated cost about ₱59.5 million.

All private schools, colleges and universities derive their income mostly from tuition fees and miscellaneous fees from students. There is no law prescribing the maximum rate of tuition fees so there is no uniformity and limit in the tuition fees being charged by private schools. Quality schools with good standards among the religious institutions charge relatively higher rates than the ordinary schools. Some of the religious schools are partly supported from their properties. Some non-sectarian schools operating specially for profit charged comparatively lower tuition fees and even permit their students to pay on easy instalments to attract as many students as possible. 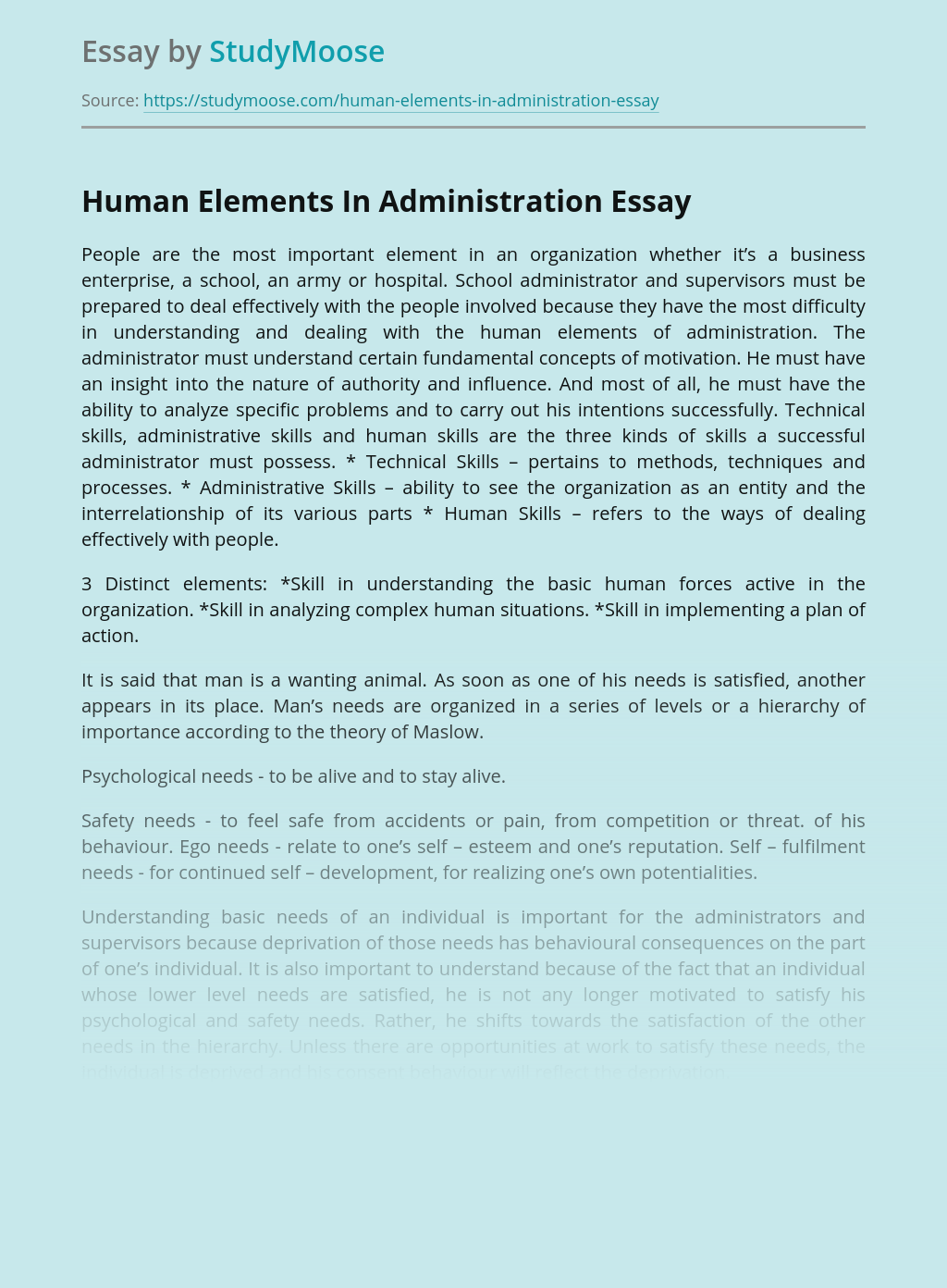 Don’t waste time
Get a verified expert to help you with Human Elements In Administration
Hire verified expert
$35.80 for a 2-page paper
Stay Safe, Stay Original