It is now possible to track humans wherever they are, thanks to the new technology of human chip implants. While this statement may sound interesting for the developers of the technology, the issue has attracted enormous debate about the ethical implications that surround the application of the technology. Human chip implants are sophisticated silicon microchip devices that are inserted to an individual’s hand or face for identification purposes (Alam, 2010). Prior to human applications, the microchip devices were used to identify and track lost and stolen pets.

Don't use plagiarized sources. Get your custom essay on
“ Human Chip Implants ”
Get custom paper
NEW! smart matching with writer

The first human to accept the device be implanted into his body was Professor Kevin Warwick on August 24th, 1998 (Witt, 1999). Warwick, a director of cybernetics at the University of Reading, U. K became the first person to host the controversial microchip after a procedure which took 20 minutes. Dr (Witt, 1999). George Boulos led a team of doctors who inserted a glass capsule the size of a pearl into Warwick’s left arm just above his elbow.

The glass capsule comprised of several microprocessors work to recognize the human and give commands and communicate with other electronic devices (Witt, 1999).

The device that was implanted into Warwick’s arm was about (23 X 3) mm and it stayed in his body for only nine days in order to avoid medical complications (Witt, 1999). In addition, the device had been found to have lost some power to function and the removal of it was to ensue. Half of the device was an electric coil while the rest of it was purely an arrangement of silicon microchips that processed and stored the information (Witt, 1999).

The device could use only 8 bits of the total 64 bits of information to interact and communicated efficiently with the intelligent building at the University of Reading.

The device functions to pass radio signals between the door frames that have rigged up doorways (Witt, 1999). When a human with the device implanted into his body enters or gets through the doorways, the radio signal energizes the coil which then produces an electric current that chips use to communicate signals which the computer recognizes a person as ‘authorized. ’ After this intelligent authentication, the door opens and the person can enter the building.

For the nine days after implantation, Warwick was able to make security doors that required only smartcards to swing open through an electronic node system that tracked Warwick’s movement through the entire building (Witt, 1999). The technology of human implants claims several applications such as the identifications of lost children as well as the confused individuals suffering from Alzheimer disease (Mcgee & Maquire, 1999). It is also proposed that the technology can have potential uses in the verifications of job applicants to determine whether they are criminals or illegal immigrants (Alam, 2010).

The devices can carry criminal and medical history after encoding the device only with one number (Alam, 2010). This shows how the device can be used for tracking among many different uses. The device can be used to gain access to facilities in a secure manner reducing the cases of theft and unauthorized access to buildings, libraries, laboratories or other places where security is of high relevance (Alam, 2010). There are human rights that are infringed when the human microchips are implanted. For example, the human chip implant would impinge the constitutional rights in relation to the Fourth and Fifth Amendments (Alam, 2010).

The device is also argued to be violating the Fourteen Amendments which provides for the rights of properties. All persons are protected from unreasonable seizures and searches according to the Fourth Amendment and one of these searches is the electronic surveillance which reveals the privacy of persons without their consent (Macgee & Maquire, 1999). Two implications about human rights abuse are made in the use of the human microchip implant; the attachment of the surveillance device on humans and the continued monitoring of the person once the device is in the body.

The ability of the microchip implanted into the body to read-write and track predisposes individual personal information to be revealed (Alam, 2010). Even if the read-only devices are used, they can be easily be scanned by the police and unauthorized searches violates the Fourth Amendments. At the same time, the use of microchip implants would violate the Fifth Amendment since the application of the microchip could be one form of self-incrimination where the device presents some tracking capabilities which breach the Fifth Amendment which provides that no citizen shall be forced to witness against himself (Macgee & Maquire, 1999).

Although the Amendments refer specifically to verbal self-incrimination, it has been argued that the Amendment applies to modern technologies which forcibly take the evidence from someone. Another violation of the implantation of microchips involves the internal property interest (Alam, 2010). The chip installation involves the breaking into the skin and implanting the device just the similar ways a pacemaker or an artificial eye. In the case of eye and pacemaker implants, the procedure is acceptable for medical reasons.

Contrary, in the case of human chip implants where the aim of the gadget is for the accounting system as well as to act as a repository for government information. In general, the human chip implants pose a number of ethical and legal issues despite their potential applications in ensuring security and tracking lost and kidnapped individuals. It is important to enact appropriate legislations that will prevent any grievous intrusion into individual privacy as the technology gets a big vote among Americans. 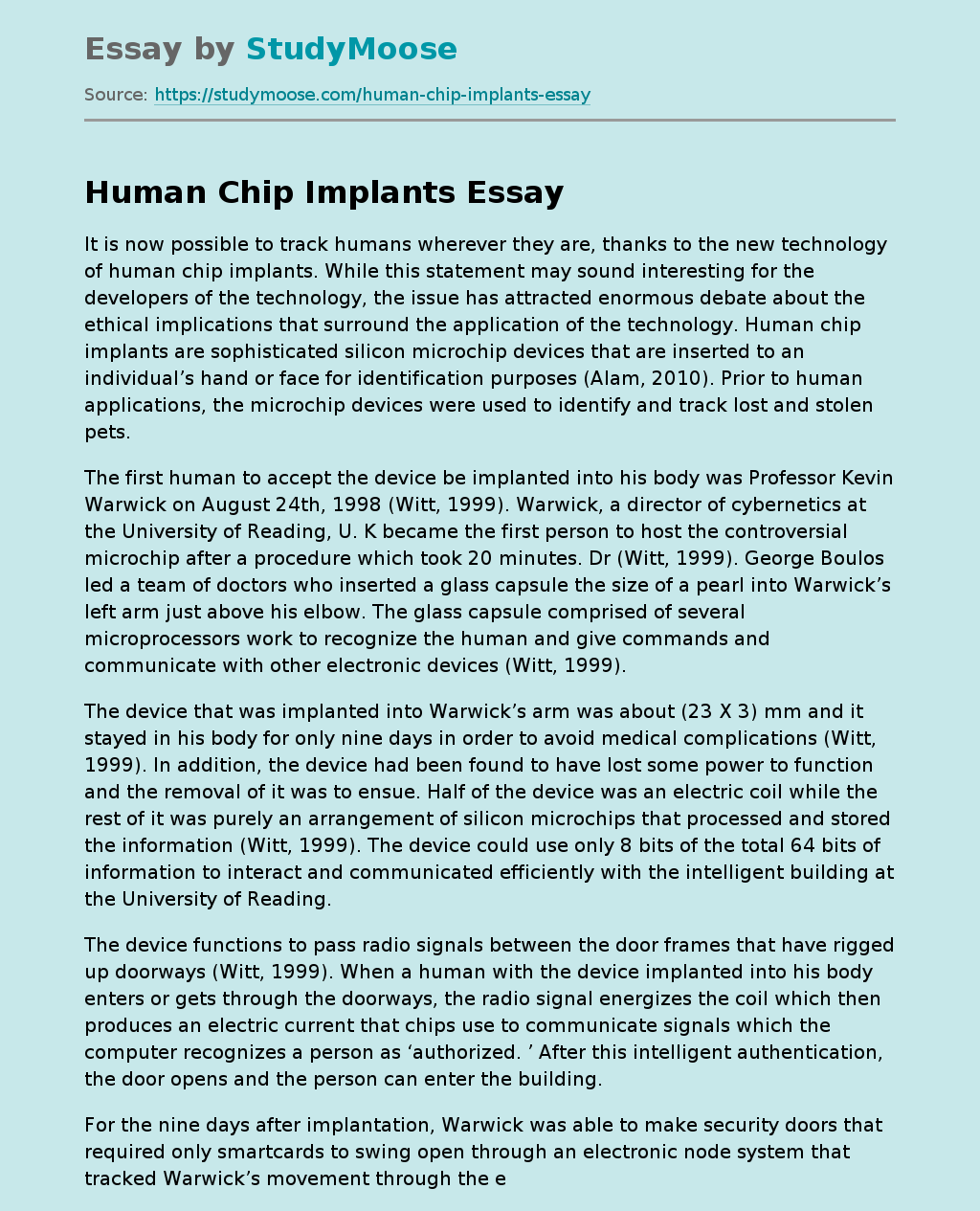