Up until 1865, slavery and all of its violence and cruelty was accepted across the United states. The self-acclaimed “Land of the Free” was not a free land for slaves like Fredrick Douglass, or even Jim, a fictional character in the novel Adventures of Huckleberry Finn. Slavery depicted in the previously mentioned novel is very much cushioned when compared to the reality of slavery depicted in the autobiography Narrative of the Life of Frederick Douglass. However, Mark Twain, author of the former manages to capture some realities within his satirical version of life before the American Civil War.

Both novels portray the classic version of slavery, where Africans are inferior to the English, but Twain’s version shows neither the extent of violence and cruelty committed upon slaves, nor the double-edged sword that comes with owning slaves.

Frederick Douglass and Mark Twain both show the most common form of slavery; the unjust control and superiority white people assert over the African race.

In Twain’s novel, Jim is loyal to his owner Miss Watson, but when Miss Watson finds out “she could [get] eight [hundred] dollars for [Jim]” (42), she plans to sell him. Miss Watson had promised Jim that she would never sell him, and knows that, by selling Jim, she would be separating him from his wife and children.

Similarly, Douglass experiences his life being toyed with over “a misunderstanding [that] took place between [Douglass’ owner] and Master Hugh” (41), his temporary owner. Because of an insignificant argument, Douglass’ entire life is once again moved to a new location. In both the narrative and the novel, the lives of slaves are not worth even the menial conflicts of a white slave owner.

When comparing the lives of slaves in Douglass’s narrative and Twain’s novel, it is evident that Twain has not done justice to the amount of violence slaves are put through. Throughout the duration of Twain’s Adventures of Huckleberry Finn, Jim, the slave, has never been whipped. That may partially be due to Jim being a runaway, but simply the fact that Jim was able to “set down on the ground betwixt [Huck] and Tom…[and] begun to snore” (9) reveals Twain’s inability to portray the true life of a slave.

Here, a slave is able to just sit down and take a nap without a second thought. In comparison, Douglass writes of when “a young girl between fifteen and sixteen years of age…lost her rest for several nights previous, [and] did not hear the [baby] crying… [Her owner], finding her slow to move, jumped from her bed, seized an oak stick of wood by the fireplace, and with it… ended her life” (26). For Jim, when he fell asleep, nothing of consequence happened to him. In fact, he got a nice rest. The young girl in Douglass’ story, on the other hand, was brutally beaten to death for the same offense. Whether it was on purpose or not, Twains satirical version of slavery is an insult to the brutalities millions of slaves suffered at the hands of white men and women.

On first glance, owning slaves may not seem to have any consequence. However, Douglass reveals, as Twain omits, the fact that slave owning is a double edged sword. Douglass’ temporary owner, Mrs. Auld, begins as “a woman of the kindest heart and finest feelings…But, alas! [her] kind heart had but a short time to remain such… That angelic face gave place to that of a demon. Thus is slavery the enemy of both the slave and the slave holder”(31). Douglass gives a first-hand account of how owning a slave can change the kindest person into a heartless devil.

Twain, however, writes of slave owning “Uncle Silas, [who visits Jim] every day or two to pray with him, and Aunt Sally, [who comes] in to see if [Jim is] comfortable and [has] plenty to eat, and both of them [are] kind as could be” (225). Though Silas and Sally are slave owners, and Jim is a runaway slave that they have captured, they are very kind to him, as they are with their other slaves. Twain’s portrayal of slave owners is much kinder than the one depicted by Douglass. This is understandable, as Twain is a white male who can identify with slave owners, and Douglass is a slave, who can identify with all the other enslaved Africans of his time.

While both Twain and Douglass write of the classic Africans-enslaved-to-white-men tale, their portrayals of slavery are very different. Douglass reveals the brutal violence committed upon slaves, while Twain writes of no violence against slaves. Douglass also portrays slavery as detrimental to the character of both slaves and slave owners, and once again, Twain does not. It is clear that there is a fine line between reality and fiction when it comes to the portrayal of slavery. Never again can the human race commit such sins against one of their own. 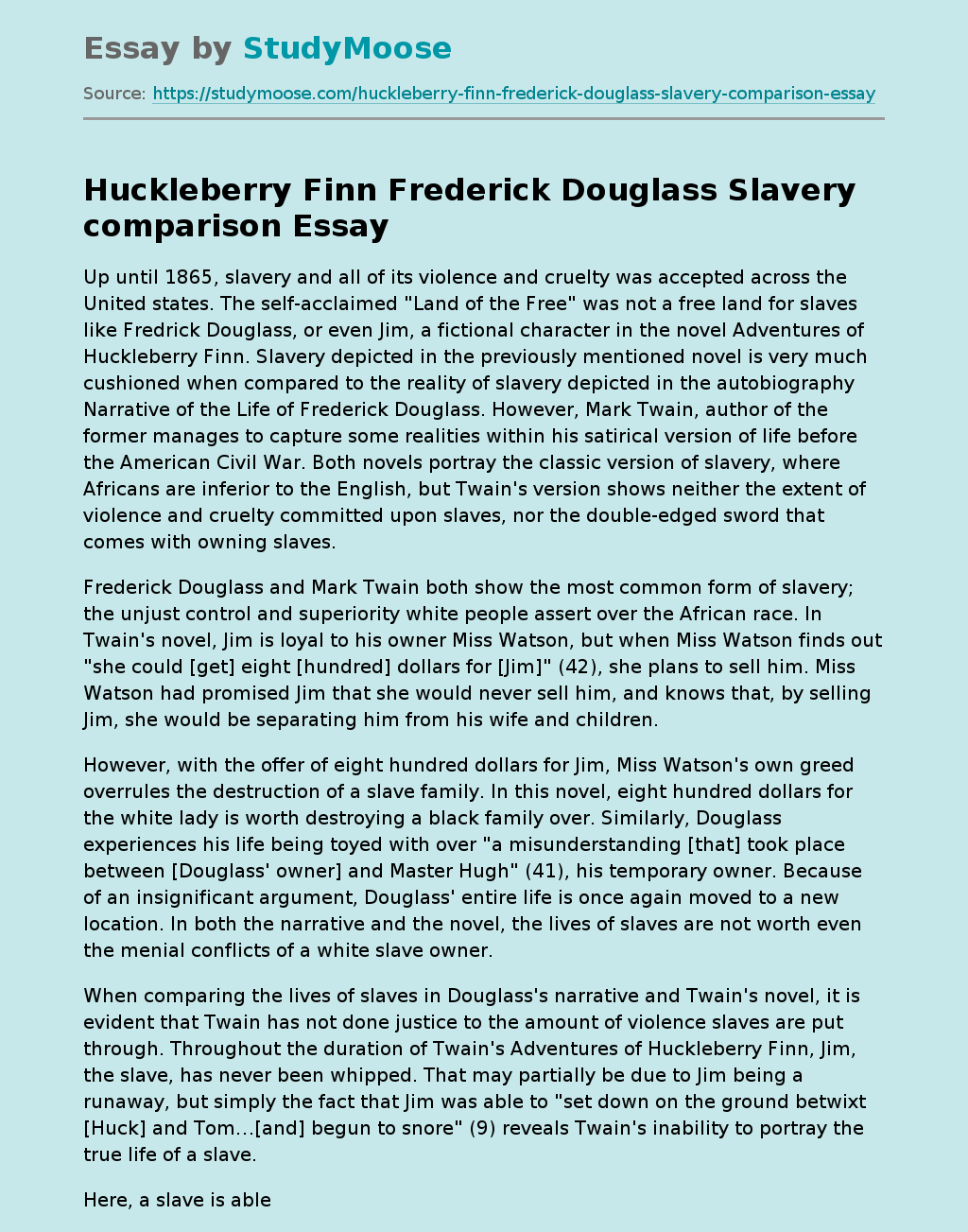