How women are presented in "The Great Gatsby"?

F. Scott Fitzgerald said of The Great Gatsby that it ‘contains no important woman character’. How are women presented in The Great Gatsby, and how can this be compared with the presentation of women in Cormac McCarthy’s No Country for Old Men?

Initially, it appears that the women characters are seen as inferior and are significant only in the relationship to male characters. A distorted view could be shown as both texts are written by male narrators. F.Kerr said that Fitzgerald felt “women are so weak, really- emotionally unstable- and their nerves, when strained, break… this is a man’s world.

Don't use plagiarized sources. Get your custom essay on
“ How women are presented in “The Great Gatsby”? ”
Get custom paper
NEW! smart matching with writer

” This insinuates that neither ‘The Great Gatsby’ or ‘No Country for old men’ contain an important female character.

In The Great Gatsby, Daisy’s life is defined entirely by her relationship with men. The line “Dinner with the Tom Buchanans,” enforces the unimportance of women characters because it suggests that Daisy’s identity is only as Tom’s wife, not as an individual in her own right, which fits with the Patriarchal society of the time.

Fitzgerald uses Daisy, Jordan and Myrtle as props to reveal the male character’s personalities “tell em all Daisy’s changed her mind” shows Daisy’s main role within the novel is to be the object of Gatsby’s desire. The character of Daisy also realises how little control she has over her life when she says “the best thing a girl can be in the world is a beautiful little fool.

This confirms Fitzgerald’s statement of no important females because it simply implies women believed their roles in society weren’t important and had accepted the reality of living in the shadows of men. The noun ‘fool’ is a person who lacks judgement which reflects Daisy’s life as she is dictated by Tom and was easily persuaded to marry him. It indicates that Daisy is aware of her unimportance as a woman and corroborates Fitzgerald’s statement. Furthermore, the adjective ‘beautiful’ means looking pleasing at sight which was how Daisy first met her husband and triumphed in sustaining a rich, luxurious lifestyle. Similarly, In No Country for Old Men Carla Jean lives in the shadow of her controlling, assertive husband.

Although Llewelyn doesn’t have money to control her, he possesses another kind of controlling factor to ensure that she feels insignificant. “What? Quit hollerin.” This enforces Llewelyn’s dominant behaviour because his disrespectful response indicates he shows no regard towards her point of view. The verb “hollerin” is extremely commanding and domineering, implying Carla Jean had yelled at Llewelyn, which isn’t particularly reflective of her nature suggesting Llewelyn finds his wife irritating and sees her of no great importance.

Fitzgerald enforces his statement of no female importance when he gives Jordan a name that isn’t gender specific as it could show he believes masculinity is a key aspect to obtaining importance. The descriptions of Jordan focus on her masculine characteristics, “she wore her evening dress, all her dresses, like sports clothes,” which suggests, through the use of a simile, she has to flaunt her boyish figure in order to remain independent and not become controlled by male characters. On the other hand, the novel was set in the aftermath of World War One, a time when women started to fulfil the job roles of males who found themselves fighting a war. This contradicts Fitzgerald’s statement “like a young cadet,” through use of a simile, Jordan could represent a modern changing woman of the 1920s. The noun ‘cadet’ means a young trainee in the police force or armed services which can stereotypically be seen as a masculine job.

However, even though Jordan appears to be independent and obtains a certain level of importance, the men still seems to act apathetically towards her, thus confirming her irrelevance and insignificance. Similarly, in No Country for Old Men McCarthy displays Carla Jean being the victim of unimportance through Llewelyn and Chigurh constantly referring to her using the pronoun ‘she’ instead of her name. Although, when Chigurh is committing murder he doesn’t distinguish between the sexes he just kills equally, he still pays no respect to Carla Jean “it doesn’t make any difference where she is,” which enforces her unimportance because to Chigurh it is just another wasted bullet rather than the taking of someone’s life.

Ryan P. Doom agrees with Fitzgerald’s: “the women in No Country for Old Men serve no purpose other than to offer support.” He believed they have little influence on the plot or the decisions made by the male characters. “You ain’t going have to come looking for me at all.” This supports Doom’s statement as it shows Llewelyn becoming more concerned about himself, rather than the urgency to save his wife. Therefore, the narcissistic Llewelyn helps portray woman as containing no importance because he puts himself first, irrespective of what will happen to his wife.

Myrtle is a character that represents the working class women of the 1920s and is someone who isn’t happy with what she has as she naively thinks Tom would leave Daisy and take her away from the Valley of Ashes. Therefore, she is a character who believes in the ideals of the ‘American Dream.’ Fitzgerald uses the oxymoron “soft, coarse voice,” to relate to her two contradictory lives as the “coarse” wife of Mr Wilson and the “soft” mistress of the upper-class Tom Buchanan. Additionally, although Myrtle believes she is Tom Buchanan’s mistress, she is essentially just involved in adultery and exposed to Patriarchal treatment because Tom has the power and control of the relationship and make the authoritative decisions as to when he wants to see her. When Myrtle begins to mock Daisy in front of Tom, “Daisy, Daisy, Daisy,” he becomes protective of his wife and let his anger overpower him by punching Myrtle.

“Making short deft movement, Tom Buchanan broke her nose with his open hand.” This proves Myrtle’s unimportance because Tom is indifferent to her feelings and values her with little significance. Feminist critic Judith Fetterley would argue Myrtle is like the unattainable ‘American Dream’. Her objectification by Tom means she has no hope of actually achieving the Dream because the Valley of Ashes has left her with little opportunity to achieve more in life, thus confirming Fitzgerald’s statement of ‘no important women characters because he gives them a poor quality of life.

On the other hand, Myrtle displays some power over her husband, “his wife’s man and not his own,” which helps contradict Fitzgerald’s statement as a higher authority and importance is being portrayed, however, her death overturns this and makes her insignificant. Similarly, in No Country for Old men, Carla Jean can be compared to Myrtle because they are both victims of lives they have no control over. Llewelyn explores female unimportance through a contemptuous tone “Well I got a good feeling, so that should even out,” suggesting he possesses no shame in the ignorance of his wife’s viewpoint and feels no disgrace in taking control.

It suggests Fitzgerald felt some disdain or misogynism towards women. Similarly, in No Country for Old Men Carla Jean watches powerlessly as Chigurh flips the coin that decides her fate “This is the best I can do. Call it.” The inability to influence the plot implies Carla Jean delivers no significant importance because she suffers with the fate that lies in the hands of a male character, which holds the direction her life is heading. Thus implying women are unimportance because they are powerless and given no authority.

A feminist may argue that women characters in The Great Gatsby are victims to a distorted interpretation as it contains male narrators and male protagonists. Fitzgerald himself admitted it was “a man’s book” which perhaps gives a biased representation of women in ‘The Great Gatsby’ and supports the notion that it ‘contains no importance woman characters.’ Arguably, Nick is an unreliable narrator as the only events brought to attention are those he has witnessed, which could suggest he’s portraying a subjective view on the female characters. Also, his opinion of Jordan as “incurably dishonest” implies distain towards her and a disregard of her viewpoint.

On the other hand, in No Country for Old Men Sheriff Bell perhaps gives a more faithful representation of female characters because he shows respect her wife Loretta Bell “she’s probably right. She generally is,” suggesting his admiration shows he gives women the acknowledgment they deserve. Arguably, when the book goes into third person, traditional ‘Western cowboy’ attitudes are exposed as women have very minor roles and barely any time to build up an important image. This could lead to a distorted view of women as they are not treated fairly and not given equal opportunity to gain the recognition and importance the male characters achieve.

Overall, the impression is given that women serve less importance than men in both novels and are less influential towards the direction the plots take. Some parts within The Great Gatsby contradict Fitzgerald’s statement because it contains characters such as Jordan who help portray a modern, independent woman which allows her to obtain a certain amount of importance. However, in No Country for Old Men the plot is largely based around Llewelyn and Chigurh who are both very narcissistic which leaves little opportunity for characters such as Carla Jean to express any importance as she isn’t even valued by her husband. On the whole, it could be argued Fitzgerald’s statement is acceptable because both novels are very male dominant.

How women are presented in "The Great Gatsby"?. (2016, May 01). Retrieved from https://studymoose.com/how-women-are-presented-in-the-great-gatsby-essay?post 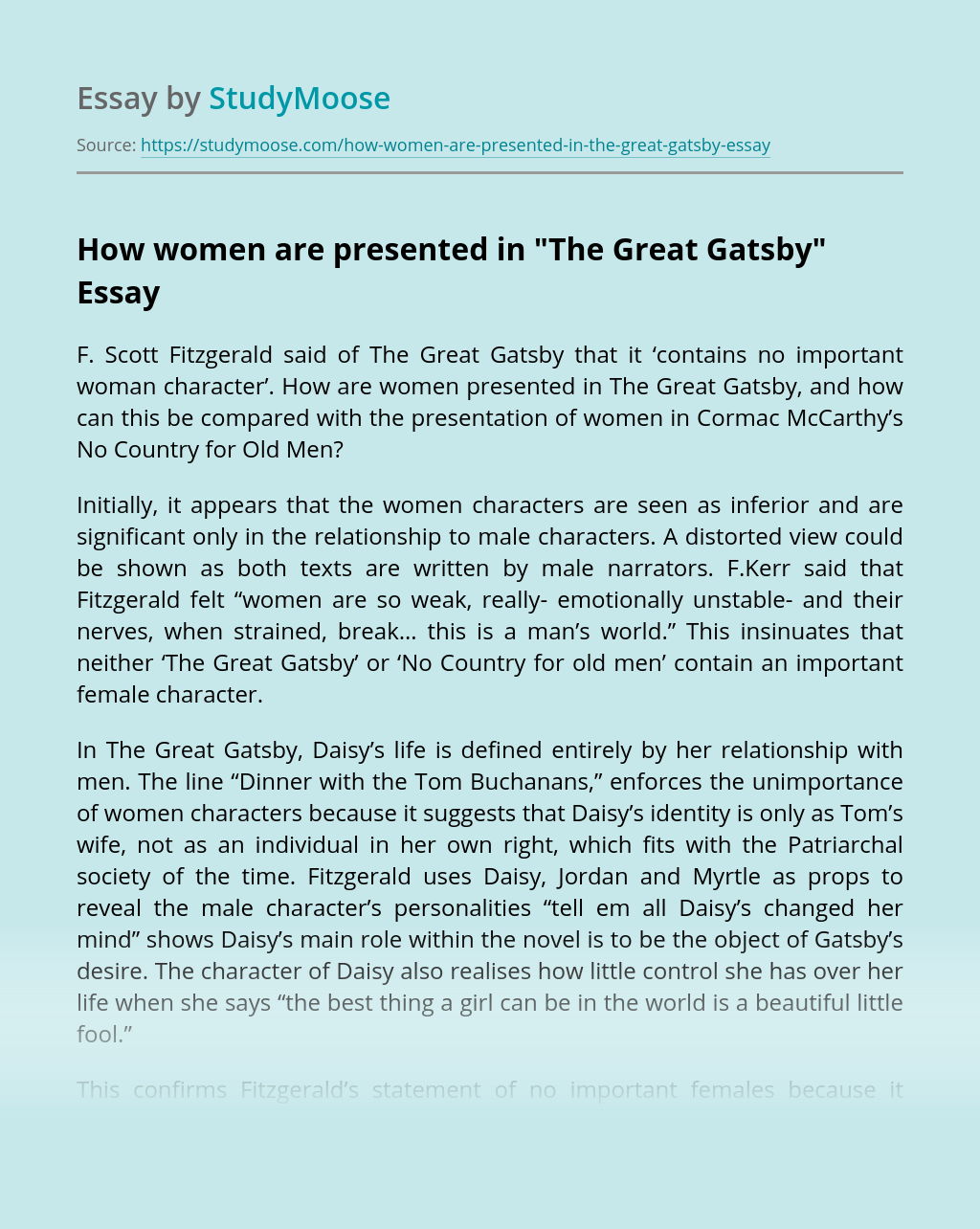