How Will Science and Technology Change Our Lives?

The Contribution of India to the world of Science & Technology dates back to ancient times. India had the best of the scientists in different fields of science and technology – mathematics, medicine, architecture, astronomy, geometry, chemistry, metallurgy, etc. Aryabhatta was a fifth century mathematician, astronomer, astrologer and physicist. He introduced the concept and symbol for Zero and the decimal place value system to the world of mathematics. Bhaskaracharya introduced Chakrawat Method or the Cyclic Method to solve algebraic equations. Kanad, a sixth century scientist developed the atomic theory which says that the material universe is made up of anu/atom, which cannot be further subdivided and they are indivisible and indestructible.

Don't use plagiarized sources. Get your custom essay on
“ How Will Science and Technology Change Our Lives? ”
Get custom paper
NEW! smart matching with writer

This is what the modern atomic theory says. In the field of medicine, India was a front runner.

Susruta was a pioneer in the field of surgery. Charak, considered the father of ancient Indian science of medicine, was the first to talk about digestion, metabolism and immunity as important for health and so medical science.

The science of Yoga was developed in ancient India as an allied science of Ayurveda for healing without medicine. India was a pioneer in many technologies such as metallurgy (steel making, iron, zinc, bronze etc) and Architecture. The findings in Moganjatharo civilisation stand testimony to this fact. The structures such as Iron Pillar in Delhi, Taj Mahal, Gol Gumbaz, Mahabalipuram, Tanjore Periya Kovil are some examples of India’s supremacy in the Architecture. Science and Modern India

Indian scientists have played a stellar role in the development of India.

In the short span of its post-independence history India has achieved several great scientific achievements. Indian scientists have proved their mettle in the face of international sanctions and have made India one of the scientific powerhouses of the world. Sir M. Visvesvaraya, Sir CV Raman, Jagadish Chandra Bose, Subramaniam Chandrasekar, Srinivasa Ramanujam, Homi Bhaba, Vikram Sarabhai are some of the names leading the pack of Indian scientists. How technology impacts people’s life?

Technology affects people’s lives by improving medicines, provides better treatment for diseases and insures a longer life. It improves transportation by helping people move from one corner of the world to other in hours by using transportation services such as Airways, Railways, or even Bus Transportation. Modern Technology changed people’s lifestyle and the way they live. For example, now it’s possible to surf Internet on TV, watch programs, pause Live TV, and even playback live shows. Internet surfing is a technology revolution.

Because of that technology, a person could know what is happening on the other side of the world. Due to Internet, it is now possible to say that the world is at your fingertips. Recent discoveries and scientific breakthroughs such as Cracking the DNA code and Mapping the Genome may completely change the way people look even before they are born. Diseases that are passed through generations, like diabetes, chronic diseases may be eliminated from the unborn child. What India should do?

While India is uniquely positioned to use technology for progress, it has in the recent past lagged behind in the quality and spread of science research. The need for a strong science eco-system based on a sound research foundation is the need of the hour for India to become a Global Power house. The key to continued success for India in a globalised knowledge-driven economy is building a higher education system that is superior in quality and committed encouragement of relevant research in science and technology. To achieve this, the government, universities, companies, venture capitalists, and other stakeholders should come together to enable Research and Development to achieve superiority in the field of science and technology.

How Will Science and Technology Change Our Lives?. (2016, Nov 20). Retrieved from http://studymoose.com/how-will-science-and-technology-change-our-lives-essay 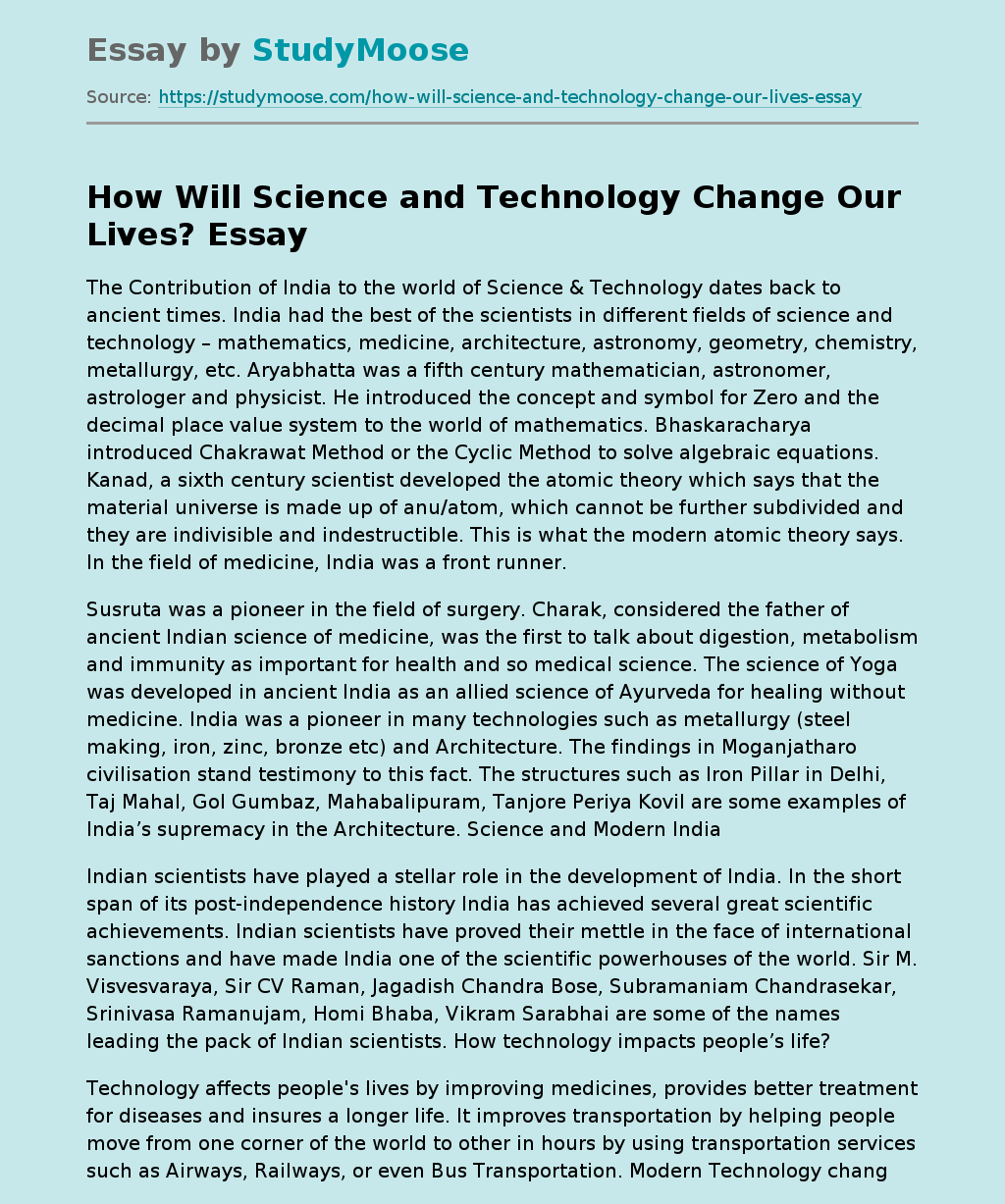