How to Write an Analysis Paper

What is analysis? Merriam-Webster defines it as “A detailed examination of anything complex in order to understand its nature or to determine its essential features: a thorough study doing a careful analysis of the problem.” When you are a student, you will not only learn how to write a paper in general; you will be required to write essays that demonstrate your ability to examine topics in a thorough, critical way. Analytical writing, in particular, involves comparing and contrasting ideas, assessing or evaluating literature.

Don't use plagiarized sources.
Get Your Custom Essay on How to Write an Analysis Paper Just from $13,9/Page

It is important to note that the approach is meant to be objective as opposed to arguing for or against the quality of the writing. You should also be aware that this type of essay takes some time to complete due to the careful reading required and thoughtful discourse. How long it takes to write one page of an analysis paper can vary, but it typically takes around three hours.

Write a paper outline. As you organize your ideas, the first step should be to create an outline. This will allow you to layout your main points, organize your paragraphs in a logical order, and it ensures that you will be able to fully develop each of the paragraphs. It is especially helpful in preventing writer’s block.

Write the introduction. Your introduction should provide the reader with some context and background on the literature being examined. This is especially true if the reader is unfamiliar with the work. Your argument should be clear, and it should focus on discussing an issue in the work (or multiple works if doing a comparison) at a deeper level beyond face value. While you want the reader to find the essay to be interesting, an analysis paper should not begin with a quote, question or anecdote “hook.” Simply inform the reader what you intend to argue, stating it as the thesis in the final sentence of the introduction.

Write the body paragraphs. This is the meat of the paper where you discuss the main points or arguments. In most cases, you will be asked to write three such paragraphs. Each of them should contain a topic sentence, an analysis of an issue brought up in the work and supporting evidence to back it up. Naturally, every point should be directly tied to the thesis.

Use quotes and paraphrases effectively. When the text contains a very poignant statement or precise terminology that would serve your argument well, use direct quotes. On the other hand, if you are summarizing the work or the text being quoted is considerably large, paraphrasing would be more appropriate.

Write the conclusion. Your conclusion wraps everything up by restating the thesis and supporting arguments. In some cases, your instructor or professor will ask you to take the argument and discuss its broader implications. This could entail mentioning the impact your arguments might have on other claims you have made about the text. On the other hand, perhaps you could discuss how your analysis might change the way the reader would appreciate the text that you analyzed.

How to Write an Analysis Paper on an Article Examples infographic

How to Write an Analysis of a Research Paper

Writing an analysis of a research paper does not differ much from other types of analysis papers. As you work on one, observe these tips:

Do: Inform the reader of the title, author, and publication date of the research paper being analyzed.

Avoid: Using empty, meaningless expressions such as, “Since ancient times, people have been reading books” or “Science is important in modern society today.”
Do: Use quotes or paraphrasing whenever the article makes a strong or even controversial point.

Avoid: Quoting large amounts of text within a paragraph

Do: Discuss the broader implications of your thesis in the conclusion

Avoid: Introducing arguments that were not previously mentioned in the paper.

How to Write an Analysis Paper. (2017, Jul 05). Retrieved from https://studymoose.com/how-to-write-an-analysis-paper-essay 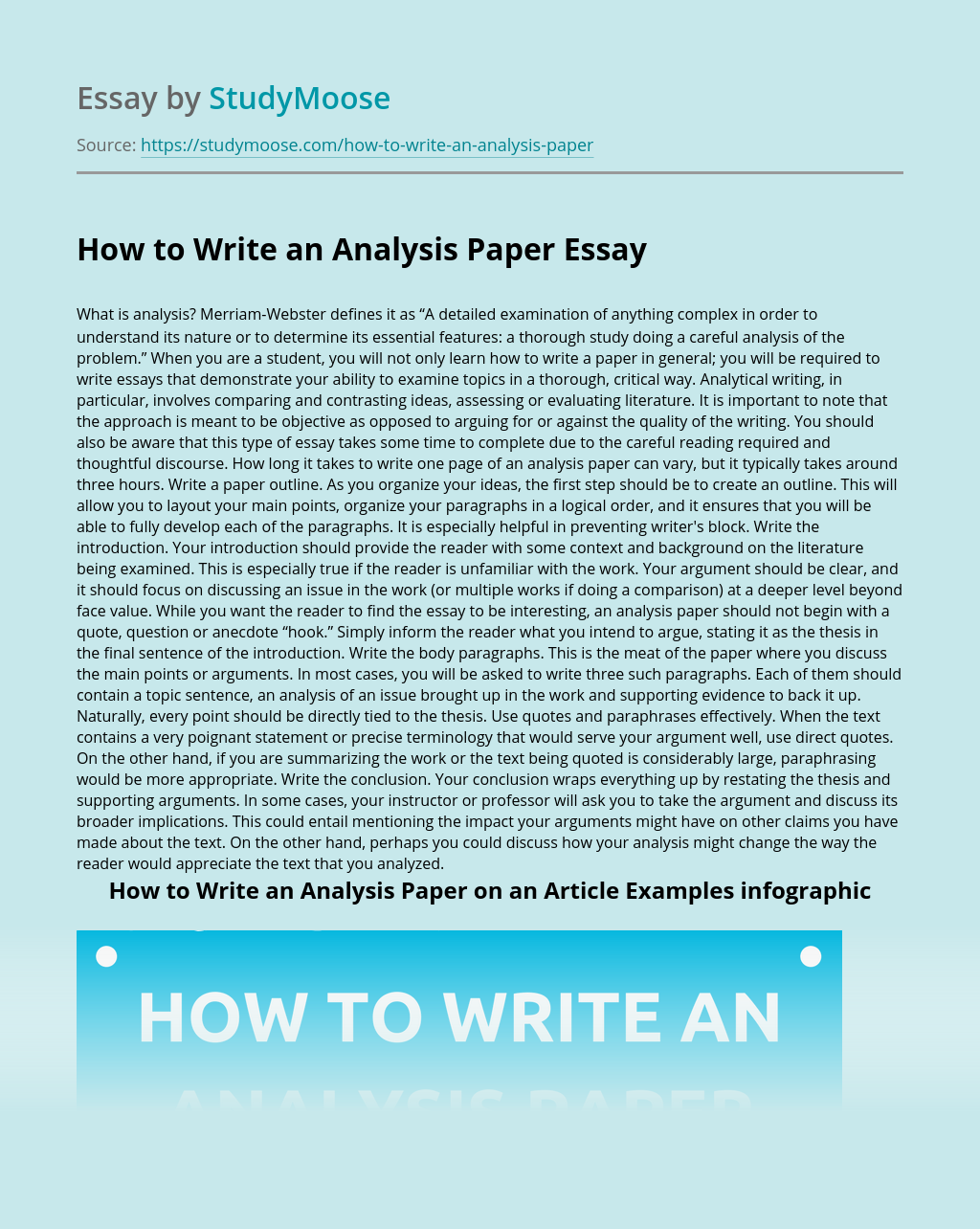