How to Stop Domestic Abuse and Violence In Schools?

Domestic violence and abuse is a prevalent problem in our communities, as well as globally. It has existed since the beginning of civilization because the problem is not just nurture, but also nature. Aggression and violence is part of the innate makeup of the human race and it is a choice we all have whether we want to manifest it in our behavior or suppress and control it. The definition of domestic abuse is when one person in a relationship or marriage tries to control and dominate the other person by using intimidation, guilt, shame, fear or physical control.

Don't use plagiarized sources. Get your custom essay on
“ How to Stop Domestic Abuse and Violence In Schools? ”
Get custom paper
NEW! smart matching with writer

Don’t be a silent partner to domestic violence and abuse. Encourage the neighborhood watch or home owners association to become as concerned with watching out for domestic violence as with burglaries and other crimes. Try to reach out to and communicate with anyone you believe is a victim of domestic violence or abuse. Never be silent about domestic abuse or violence. Speak out publicly against it. Try to help others become educated and informed by inviting speakers to your professional organization, house of worship, civic group or workplace.

Advocate laws and judicial procedures at the state and local levels that support and protect battered women. How to prepare shelters for battered women and children? Establish centers where visits between batterers and their children may be supervised for the children’s safety. Adequate funding for shelters for the victims of domestic abuse and violence is of the utmost importance; providing a safe place will help more victims speak out and to give them the courage to leave their abusers.

Have a safety plan in place so you can be prepared to escape when the situation becomes dangerous. Every individual in an abusive relationship needs a safety plan. Shelters and crisis counselors have been urging safety plans for years, and police departments, victim services, hospitals and courts have adopted this strategy. Safety plans should be individualized, for example, taking account of age, marital status, whether children are involved, geographic location and resources available .

How to stop violence in schools

We all know there is violence in schools. Like in the past a couple of years there has been many shootings in school and I wonder how we could stop that. We could have a police officer on campus at all times. We could also have a group of students be a crime watch team. But the most important is to have kids be in a non-violent environment at home.

If schools would have a police officer there, it would stop most violence because he knows all of the laws. When anything suspicious happened, he could investigate the situation. If he found resulting in violence, he could give the person punishment, so the situation doesn’t result in violence.

Schools with crime watch teams would probably have a lower violence rate because there would be more people trying to stop violence. The school could have some of the students that get good grades and have them look for violence in schools.

The most important way to avoid violence in schools isn’t even something at school. The students need to have a non-violent environment at home. They need parents that show positive attitudes because everyone learns from their environment and if its good there more likely to do good things. If it’s bad they’ll probably do bad and violent things.

Well now you know some ways violence could be stopped in schools. So spread the information because we don’t want any innocent students getting hurt or even dying.

How to Stop Domestic Abuse and Violence In Schools?. (2016, Jul 16). Retrieved from https://studymoose.com/how-to-stop-violence-in-schools-essay 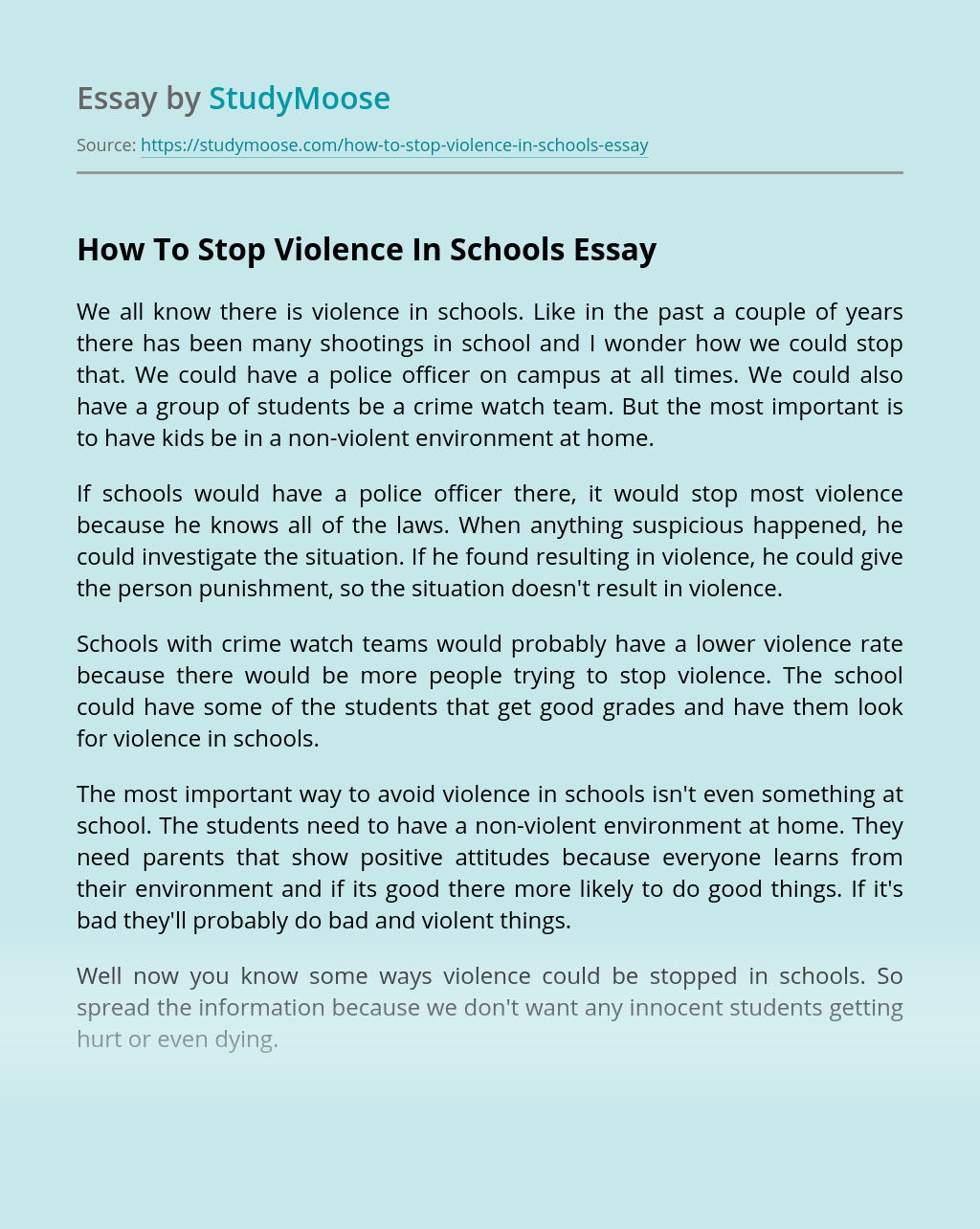