The story of Phar-Mor is a tale of fraud, one of the largest in American corporate history, but it’s also a modern morality play in which previously honest people, hired more or less at random, sustained the fraud for years. Phar-Mor, Inc. was a deep-discount store that had substantial growth in a short period of time. It started with 15 stores and grew to over 310 stores in thirty two states between 1985 and 1992. As its success grew, competitors of bigger retail stores such as Wal-Mart began to worry about what was going to happen to their own company’s.

Don't use plagiarized sources. Get your custom essay on
“ “How to Steal 0 Million” Phar-Mor Fraud ”
Get custom paper
NEW! smart matching with writer

The president, founder, and COO of Phar-Mor was Mickey Monus, who became quite extravagant with his money as Phar-Mor grew.

Mickey Monus’s key to success was a practice he coined as “power buying” which was the stocking up on products when suppliers were offering them at rock-bottom prices. After using this strategy Phar-Mor would then sell the products at extreme discounts in order to beat any competitor’s prices.

However, the deep discount prices were so low that eventually Phar-Mor was no longer able to turn up a profit, which is how the problem began because Monus and other executives did not want the truth about their losses to damage the success and favorable reputation of Phar-Mor, they began to use imaginative accounting practices to hide their losses on the financial statements.

So how exactly did the Fraud occur? As Phar-Mor grew it constantly found itself up against Wal-Mart in mall after mall.

In 1985, there were 12 stores; by 1987, 40. In order to win in the world of deep discount, you need to beat out the prices of your competitor’s and hope to win over their customers. So for the next two years, Monus dedicated Phar-Mor to underselling Wal-Mart. However, the prices were so low, that he began losing money in those stores. Chief Financial Officer Pat Finn watched nervously as, year by year, the profit margins of the entire company eroded. By 1989 he realized Phar-Mor now faced a loss of million, so he had no other choice but to go to Monus with the bad news.

This put Mickey Monus in a tough position. What had seemed a white-hot company in a sizzling industry was losing money. He only had a couple of options, he could either announce the losses and risk losing his credibility, his credit and, quite possibly, his company, or he could buy a little time by parking the losses temporarily and put more effort into improving efficiency, getting lower prices from suppliers, something that would enable him to turn a profit once again. So what did Monus do? He chose to buy time.

Pat Finn states that when he brought the disappointing results to his boss, “Monus simply crossed them out with a pen and wrote in higher numbers showing a profit.” Now, this was illegal, but the report was mainly an internal document in which Phar-Mor was using to lie mainly to its owners. According to Pat Finn, “Monus continued to change the weekly financial reports for four months before entrusting the task to him. Monus refused to talk to us about this or any other issue.” The true numbers were kept in a separate set of books called the “sub-ledger” and Phar-Mor’s accounting manager, John Anderson, was brought into the plot to keep track of the temporarily altered figures. 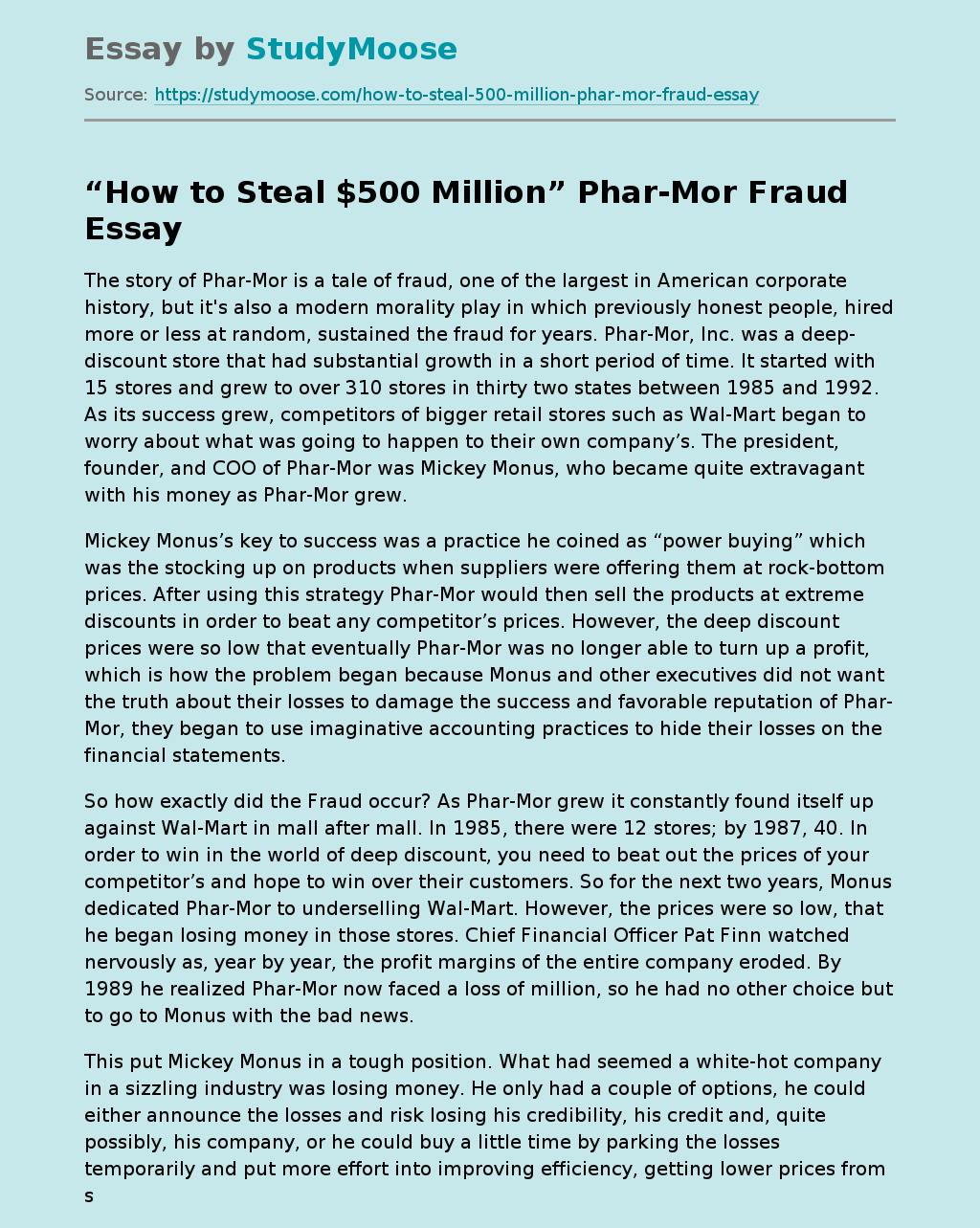