How to Solve Scarcity in the Economy?

Consider the two sides of the scarcity problem.

Don't use plagiarized sources. Get your custom essay on
“ How to Solve Scarcity in the Economy? ”
Get custom paper
NEW! smart matching with writer

* Unlimited Wants and Needs: This is a basic characteristic of humanity which means that people are never totally satisfied with the quantity and variety of goods and services.

It means that people never get enough, that there is always something else that they would want or need.

* Limited Resources: This is a basic condition of nature which means that the quantities of available resources used for production are finite. It means that the economy has only so many resources that can be used AT ANY GIVEN TIME time to produce other goods and services. Humans live in a world of scarcity. This world of scarcity is what the study of economics is all about. That is why scarcity is usually subtitled: THE ECONOMIC PROBLEM.

Scarcity does not preclude technological advances and other discoveries that “lessen” the scarcity problem with better ways of satisfying wants and needs. In fact, scarcity actually predicts such things. People are motivated to work, go to school, invent products and discover new continents because they do not have all that they want.

Why invent, discover, or explore if all wants and needs are satisfied? Increasing limited resources does not make them unlimited only less limited. Scarcity persists. Solutions?

The reason for this economic pessimism rests with the two, and ONLY two, possible ways to eliminate scarcity. 1. Unlimited resources: Unfortunately, the planet Earth is finite. The solar system is finite. The galaxy is finite. In all likelihood, the universe is finite. None of this bodes well for achieving unlimited resources as a means of solving the scarcity problem. 2. Limited wants and needs: If every human being had finite wants and needs that could be satisfied with a finite amount of resources, then scarcity would cease to exist. But what sort of genetic engineering would be needed for this? Would humans still be human?

3. You allow the market price to rise to the point where demand=supply. The item will still be scarce (because it is not in unlimited supply), but everyone who is willing to pay the price will be satisfied. Alternatively, you can ration by authority. Someone with enough power to coerce people to do what they won’t naturally do would simply choose who gets the scarce goods and who doesn’t. 4. Find economically viable alternatives/substitutes – e.g. instead of petrol, try vegetable oil (it works, but I don’t think cars are made for them).

5. Alter supply – e.g. instead of restricting imports, increase them.

7. Increase the price – a side effect of the lack of supply, but you will probably be faced with lobbying groups.

8. Be prudent and prioritise use – if it’s scarce, it shouldn’t be wasted. So cut back on non-necessities.

9. Innovate -R&D to find new ways to solve the problem. Alternatively, you can change a few things and make a massive difference. However, innovation is spontaneous and is often circumstantial.

10. Reduce demand – change what the thing is used or alleviate the thing that it is used for. If the demand for the product is not there, scarcity is not so much a problem. Simpler said than done though. 11. Expansion of the productive capacity of an economy would help. However, it is likely scarcity will always exist as resources are limited but wants are infinite. So generally, it is how to allocate the resources most efficiently rather than how to solve scarcity, as scarcity can’t be solved. Resources have to be allocated at their optimum level, if this doesn’t occur it is known as market failure.

The government can intervene in the form of taxation (placed on a good to discourage its consumption), subsidies (given to firms to encourage production of a good, which makes it cheaper therefore encouraging consumption), regulation (laws used to prevent consumption of a good) and pollution permits (allocated to firms allowing them to produce a certain amount of pollution, they’re tradeable which encourages firms to be greener).

How to Solve Scarcity in the Economy?. (2016, Nov 19). Retrieved from https://studymoose.com/how-to-solve-scarcity-in-the-economy-essay 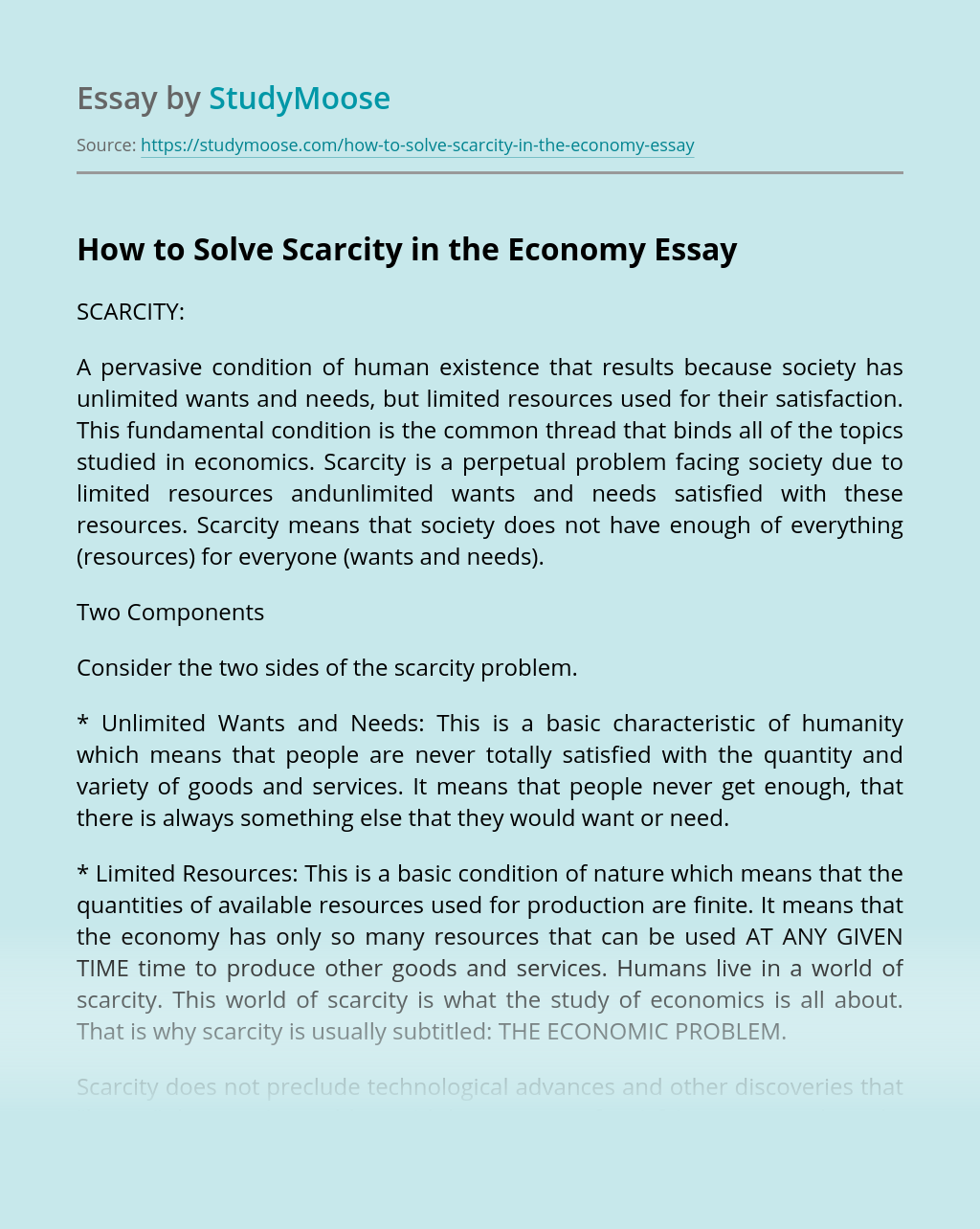