How to Save Trees Buying Toilet Paper?

The pages of history state that there was an era in which many other alternatives were used instead of toilet papers. Examples of such alternatives included leaves, pebbles, and water. In ancient times the tribes used to clear their excreta through the remains of a corn or corncobs. They would also sometimes use the skin of the corn.

Toilet paper is made up of thin fibers of trees. The increasing demand of toilet roles is decreasing the amount of trees, which are of a great use.

Don't use plagiarized sources. Get your custom essay on
“ How to Save Trees Buying Toilet Paper? ”
Get custom paper
NEW! smart matching with writer

The manufacturers of toilet roles many times chop the trees but as it is said they do not understand the importance and just throw the remaining fiber as if it is not of any use.

On average, Britons use 17.6 kilograms of toilet paper annually whereas Americans use 15.7 kilograms annually. (Waterfield, 2007) In all, Americans consume 27% of the total wood produced globally. On average, each American uses 75 cubic meters of wood annually. In North America alone, almost half of the coastal temperate rainforests have been wiped out.

Almost half of the forests that were originally spread over an area of 48% of the Earth’s land surface have been lost. Moreover, “only one-fifth of the Earth’s original forests remain pristine and undisturbed.” (NRDC: Forest Facts, 2004)

In the United States, 94% of the original forests have already been destroyed. Currently, 307,000 square kilometers of forests are remaining which make up around 2% of the total forest remaining worldwide. (Remaining Frontier Forest, n.d.)

Toilet Paper manufacturers like Kimberly-Clark say that consumers want non-recycled toilet papers because of their softness which is not possible by using recycled material.

Most manufacturers use pulp because it increases the softness of toilet papers. As stated above, many consumers prefer those toilet papers which are soft although the use of recycled toilet papers reduces environmental hazards like global warming by saving trees and forests.

Approximately in the USA 5.8 million tons of tissues grades, toilet paper, towels, sanitary products, facial tissues, and diapers are produced yearly. And around 3.5 million tons of scrap paper was used to manufacture aforementioned products. “By recycling 1 ton of paper you save: 17 trees 6953 gallons of water, 463 gallons of oil, 587 pounds of air pollution, 3.06 cubic yards of landfill space, and 4077 Kilowatt hours of energy.” (Fun Facts, n.d.)

An average roll contains 227 grams weight, which usually include the cardboard core tube and this is just over half of a pound. In paper related manufacturing account shows that around 28 percent of trees have been cut down in this respect. However, more trees are planted every annum instead of chopped down. Fortunately, on an average five trees are planted in place of one chopped down tree. (Fun Facts, n.d.)

There are over five hundred paper mills are working in the United States. Global production of paper is predictable to expand forty six percent by the year 2040. In this regard, One of the most complete sources for tree-free paper is the “Oregon based Fiber Options Paper Company catalog”. The owner of the company Karen said that, plants just like “kenaf” produce four times as much fiber per annum as tress. Hence the plant shorter fiber also forms them more easily recyclable. (Fun Facts, n.d.)

Recycled paper is paper that comprises fiber from waste paper. Nevertheless, there is no global agreement on the exact definition of this. According to paper user’s environmental forum checklist recycled paper should comprise as high proportion of pre consumer fiber waste as possibility proportionate. A pre consumer waste paper is a paper that has been used by the end-user for the indented purpose. Recycling paper is not only gathering wastepaper, but also using paper with recycled substances. Certainly, Toilet paper with high-recycled content is neither expensive nor difficult to acquire.

“Recycled paper, either pre or post-consumer materials needs to be washed and is often deinked prior to being pulped. The pulp goes through a bleaching process to make it whiter. There are many bleaching processes; New Leaf Paper chooses a processed chlorine free process.

Once the pulp is bleached, it enters a series of phases including the following: the paper forming section; the press section where water is removed by pressing the wet paper between rolls and felts; and the drying section where the moisture content is reduced to the desired level; and the calendering section where the paper is compacted and smoothed progressively as it travels down a stack of steel rolls. After completion, the paper is stored in either rolls or cut into sheets”. (Fun Facts, n.d.)

A research conducted by EPA for congress in the early 1970’s disclosed the facts that by using one ton of 100 percent recycled paper we can saves 4100 Kwh of energy, which is sufficient for 1 home for six months besides this we can save 7000 gallons of water. The study further revealed that it also keeps more than sixty pounds of pollution out of the fresh air and hence saves 3.3 cubic yard of landfill space, which is increasingly significant as many domestic landfills near capacity. Moreover, representatives of paper industry companies also approximated that 1 ton of recycled paper saves nearly 17 trees. (Fun Facts, n.d.)

How to Save Trees Buying Toilet Paper?. (2017, Mar 08). Retrieved from https://studymoose.com/how-to-save-trees-buying-toilet-paper-essay 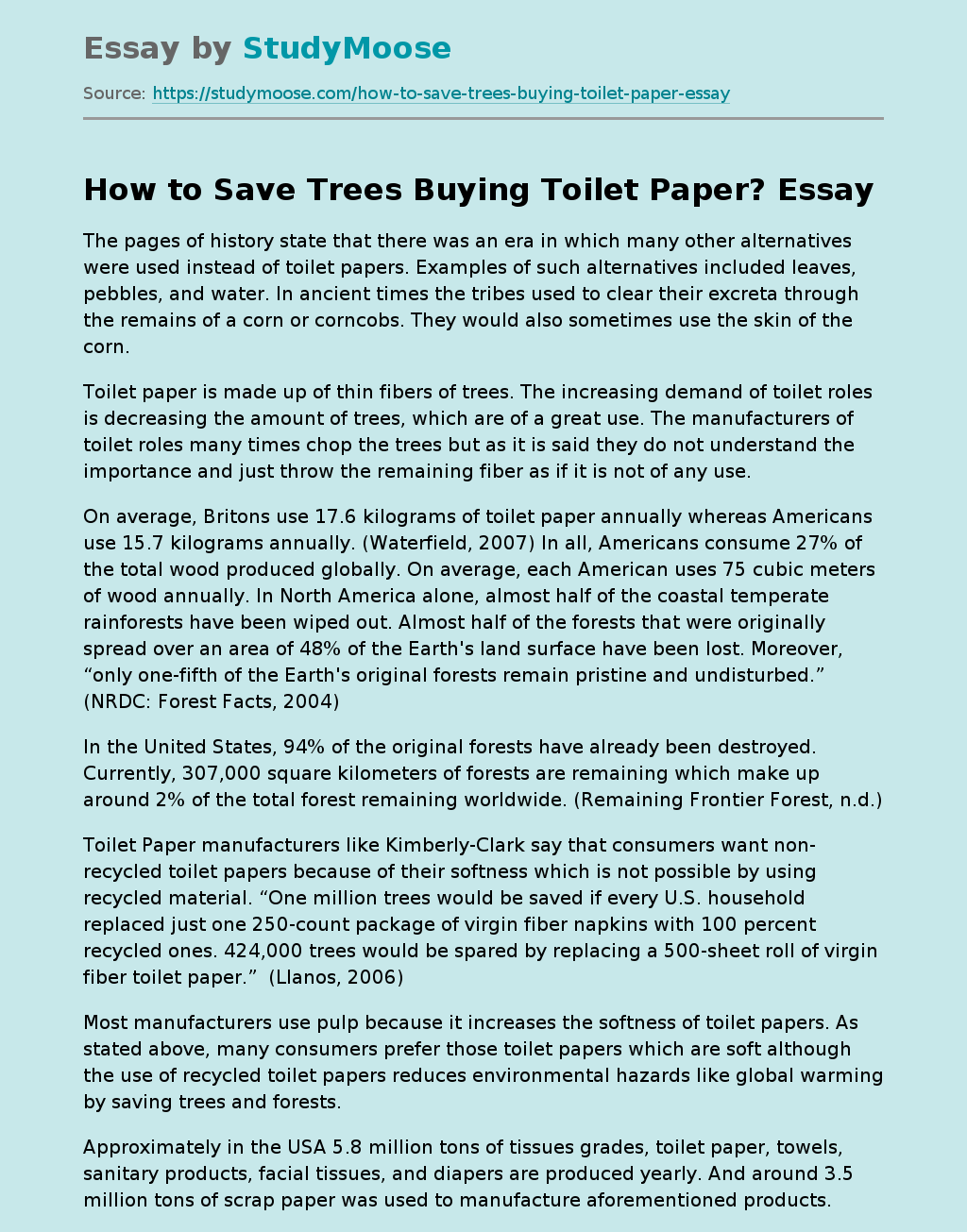