How To Recycle Trash in Singapore?

Have you ever wondered how much food you throw into the bin every day? Curious to know the efforts made to reduce the amount of food you dispose inside that single bin? There are various groups of people working behind the scenes, trying to cut down on food wastage. One of the main driving forces behind this initiative would be the government, who has put insufficient measures and efforts to reduce food wastage in Singapore.

The government has taken this issue into serious consideration.

Don't use plagiarized sources. Get your custom essay on
“ How To Recycle Trash in Singapore? ”
Get custom paper
NEW! smart matching with writer

Other than gathering these statistics, the National Environment Agency (NEA) also identified the sources of food wastage. In a TODAY online article, it was reported that out of 800,000 tonnes of food waste generated in Singapore, and about half of it stems from non-domestic sources like food manufacturers, food retailers, hotels and shopping malls (Ong, 2018). Thus, the government has done in-depth research into the food wastage issue.

The government has reduced food wastage by reaching out to the masses. They influenced various platforms to minimize food waste. One of the platforms they impacted would be schools.

According to Ang (2018), Greendale Primary School took part in the “Love Your Food @ School” programme launched by the NEA in April 2017. The school educated the students on the importance of reducing food wastage and even rented a food-waste digester for the programme. Favourable results have been achieved as the amount of food waste the school generated daily has decreased from 17.9kg to 10kg. The government also influenced the start-ups of businesses which aims to reduce food wastage in Singapore. One of them would be Good for Food. They intend to reduce food waste in commercial kitchens, hotels and restaurants with technology, and by producing reports on the amount of food waste their clients generate (Good for Food, 2019). Chia and Lim (2019) reported that the founder of the company, Rayner Loi, was shocked at the alarming food waste statistics in Singapore, thus he decided to start Good for Food. With their technology, food waste has decreased by an average of 30 to 40 per cent in places such as hotels. Hence, the government’s efforts to involve people in the initiative to start reducing food wastage was successful.

On the other hand, some might argue that the government’s efforts alone are not enough to reduce food waste. Supermarkets continue to toss out edible food. Supermarkets dispose of food which are still in edible condition simply because their customers do not want to purchase it. One of the reasons would be that customers find the food to be ‘ugly’. This term refers to foods that are disfigured or blemished but still edible. A survey by Electrolux discovered that 83 per cent of Singaporeans would only purchase foods like fruits and vegetables that look fresh (as cited in Othman, 2016). A fellow Singaporean, Clara Lim, decided to try out dumpster diving to salvage edible foods that are thrown out by supermarkets, hawker centres and bakeries. Throughout the week, she was able to salvage around $60 worth of bread, meat, fruit and vegetables that are still eatable, although they were not the best-looking ones (Lim, 2019). This shows that most Singaporeans have trouble accepting and buying foods that does not look good, even though they are not rotten. Hence, this results in supermarkets throwing them out because no one would buy them.

The government acknowledged the issue of Singaporeans of being unable to accept ‘ugly’ foods, so they devised solutions to address the problem. They encouraged food businesses to put ‘ugly’ foods on sale and began to support services which sell ‘ugly’ food products. The Food and Agricultural Organisation (n.d.) suggested that governments can revise the regulations and standards of selling fruits and vegetables in supermarkets, such as selling ‘ugly’ foods at a reduced price. The NEA took this suggestion into action as they have worked with food businesses to aid them in reducing food waste (National Environment Agency, 2019). For instance, FairPrice sold blemished and misshapen fruits and vegetables at a lower price, and this effort reduced wastage by 48 tonnes from 2015 to 2017 (Lai, 2017). NEA also supported the Ugly Food company, which converts ‘ugly’ fruits into delicious food products such as juices and popsicles. To date, Ugly Food has managed to salvage 87,185 fruits and vegetables in Singapore (Ugly Food, n.d.). Thus, the government has managed to encourage food businesses to minimize food wastage.

In conclusion, the government gathered data on food waste in Singapore as they showed concern towards this issue. They utilised the statistics to formulate strategies to reduce wastage through education in schools. The collected data even influenced the creation of new businesses which reduces food wastage. The government recognized that most consumers are reluctant on purchasing imperfect looking foods, so they encouraged supermarkets to sell them at discounted prices, which motivated customers to buy them. They also supported a business which promotes the idea that ‘ugly’ foods are just as delicious as perfect looking ones. Thus, the government was able to implement suitable measures which aided in reducing food waste in Singapore.

How To Recycle Trash in Singapore?. (2020, Sep 28). Retrieved from http://studymoose.com/how-to-recycle-trash-in-singapore-essay 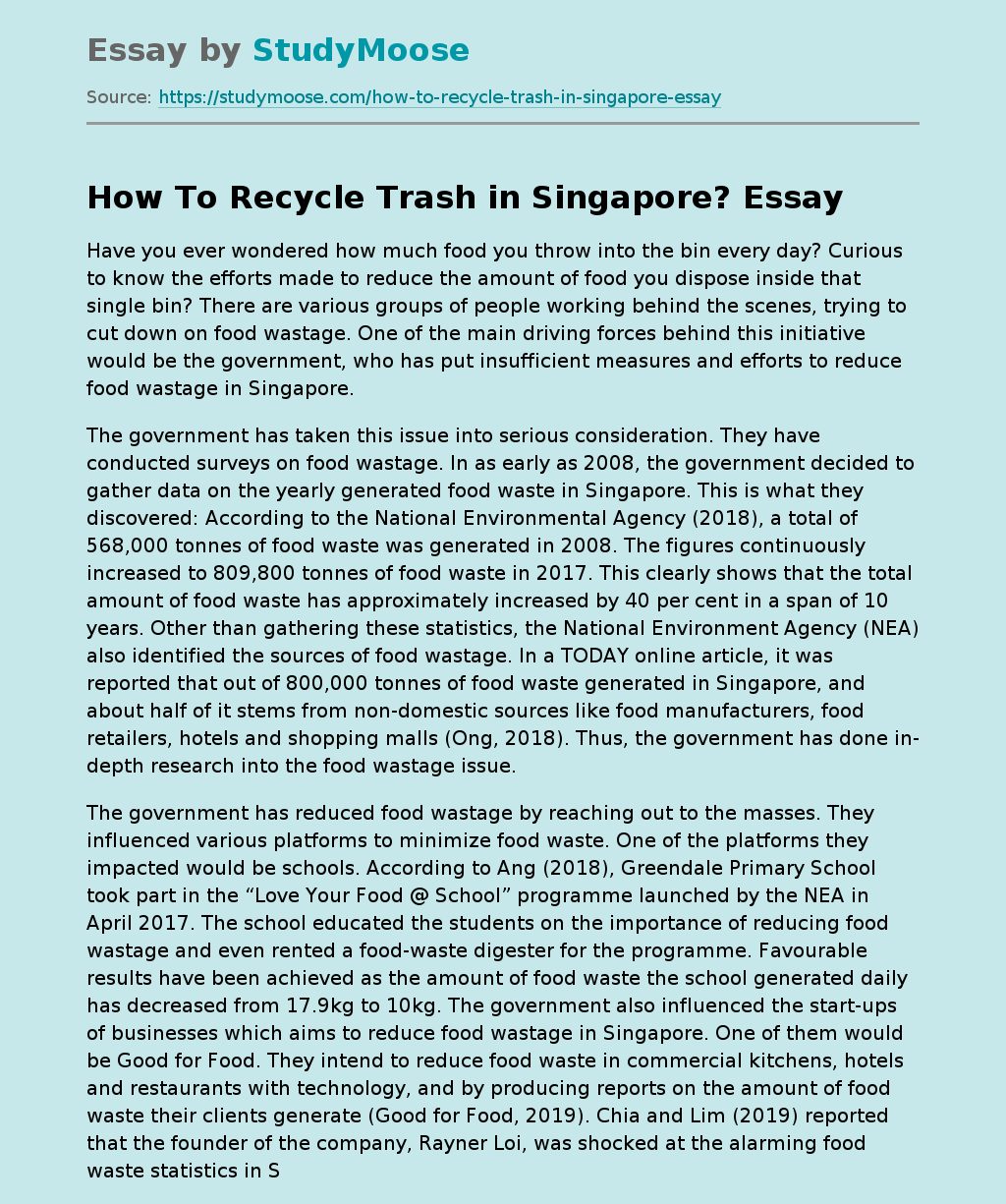