How To organize Our Knowledge With Schema Theory?

Schemas are mental representation of knowledge built through experiences from people, situation or object. Schema Theory is divided into three stages to get a better understanding of the memory processes which are “

“Schema is seen as a kind of framework where some information is filled in and others are left blank”. Schema theory tries to approach the analysis of the world from a psychologist point of view which origins from cognitive science.

Don't use plagiarized sources. Get your custom essay on
“ How To organize Our Knowledge With Schema Theory? ”
Get custom paper
NEW! smart matching with writer

Schemas are very helpful in different ways, and they are used to organize our knowledge which would make it easier for us to recall.

They also help us to understand present situations and also try to predict what is most likely to happen next. Schema theory allows us to analyse our experiences by using significant social and textual schemas, and if no relevant schema is recalled from long term memory a new schema starts to create, and they are again stores in long term memory.

After the research was done he noticed few things like the story became shorter the more times they reproduce the story. The story was coherent no matter how distorted it was compared to the original story.

Later on story became conventional; it could recall only that information that is related to past experiences and cultural background of the participants, and every participant rationalized the theory until some extinct. So after this experiment took place Bartlett came to a conclusion that people reconstruct the past by trying to fit into the present schema. The participants tended to alter their memories to make their story consistent. This experiment brought to an evaluation that memory is an active reconstruction process, and results are not entirely reliable as the intervals of time and could be different. For the advanced support Anderson & Pichert did more research whose aim was to experiment influence on schemas at encoding and retrieval. In this particular case study participants were given one schema at encoding stage and another schema at retrieval stage to see if they were impacted by previous schema when they had to retrieve the information.

Participants heard a story based on 72 points and they were asked to read the story in either burglar or buyer perspective. Then before they were asked to recall the story they were distracted for 12 minutes, then half of the participants were given different schema which people who read the story in burglar perspective first switched to buyer perspective and vice versa. The other half of the participants were asked to recall their original schema and they were tested on it. After this procedure took place the results were that the participants who changed their schema recalled 7% more points on the second recall test compared to first trial, and the group that continued with their own schema recalled fewer points at the second recall test. Anderson & Pichert came to the conclusion that schema processing must have some effect at recalling as well as encoding. It also showed that people who encoded information were irrelevant to their prevailing schema because people who had the buyer schema changed to burglar schema at encoding were able to retrieve burglar info when schema was changed and vice versa.

This steps list was later named by the restaurant script. They use this kind of script information to write stories about people going to eat at a restaurant. Later, these stories were presented to a new group of participants. These participants first had study the stories and later recall them. The findings of this research were interesting, they found that participants recalled material that was consistent with the restaurant script but were not been included in the stories. However, after so many experiments on this schema theory they came up with one problem over schema theory.

They explained the problem as that it is hard to explain what exactly schema theory is, and they came to point that schemas are untestable, and there is no full understanding of it. “Cohen (1993) points out that “the whole idea of a schema is too vague to be useful’ and argues that schema theory provides no explanation of how schemas work.” Nevertheless, there is enough research to suggest schemas do affect memory processes knowledge, both in a positive and negative sense. They do simplify reality, and help us to make sense of current experiences. Schemas are useful concepts in helping us understand how we organize our knowledge.

How To organize Our Knowledge With Schema Theory?. (2017, Jan 09). Retrieved from https://studymoose.com/how-to-organize-our-knowledge-with-schema-theory-essay 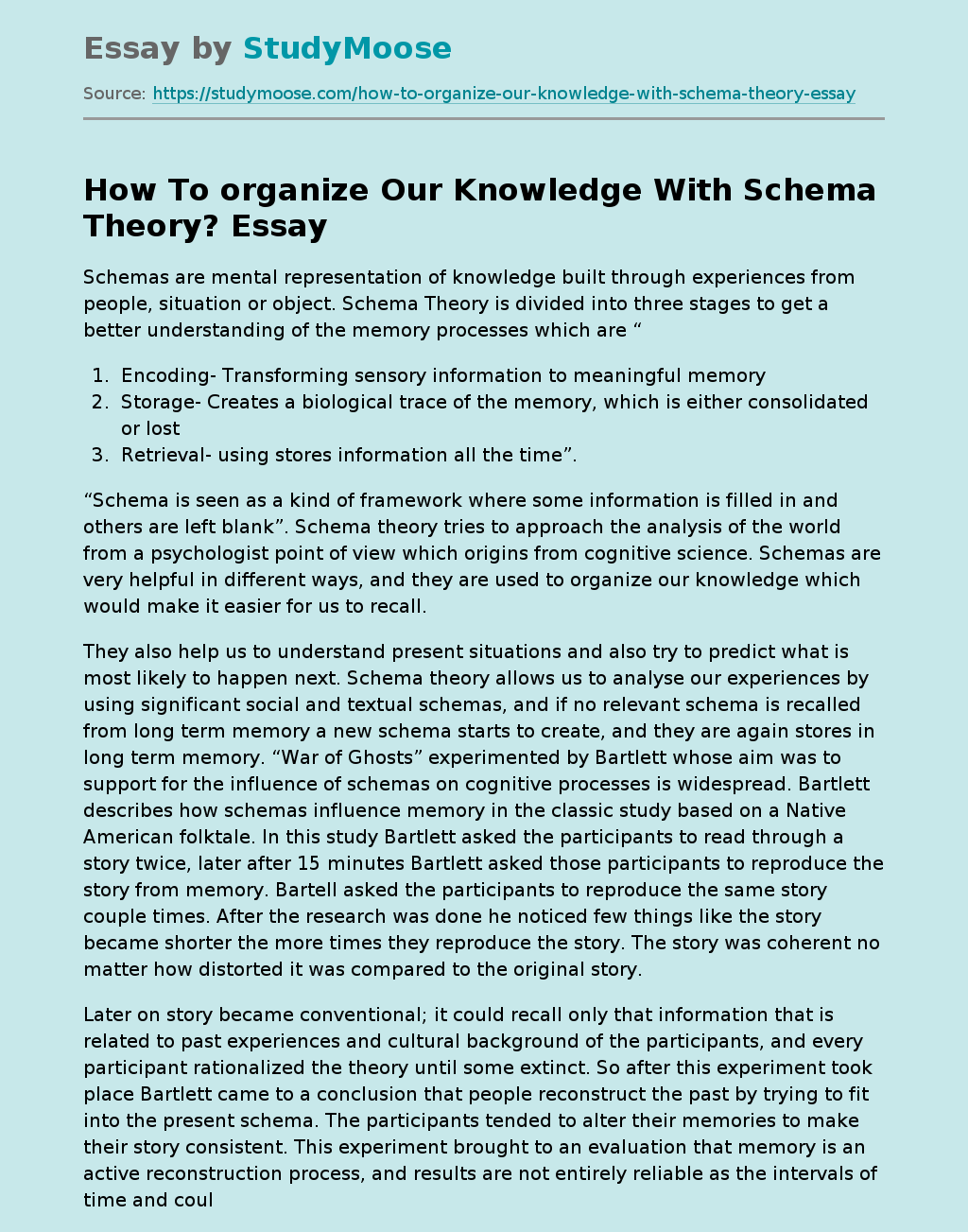