How to make ice cream?

There is always room for dessert and when it comes to sweets the first thing that pops into mind would be none other than ice cream. Chocolate, strawberry, vanilla, pistachio, the flavor goes on and on. Children and grown ups alike all scream for ice cream. The origin of this American dessert can be traced back from the 4th century B. C. When the Emperor Nero of the Roman Empire wanted to have a combination of ice and fruit toppings brought over from the mountains.

Don't use plagiarized sources. Get your custom essay on
“ How to make ice cream? ”
Get custom paper
NEW! smart matching with writer

Over the course of time, this dessert became popular until such time it was served in the Royal courts of France. When this dessert arrived in America, it was welcomed by the people. George Washington served it to some of his guests. New York City is the home of the very first ice cream parlor. The name iced cream evolved and was later on called as ice cream.

Controlling and lowering temperature for the preparation of ice cream has been a constant challenge way back then until someone invented a way to use a mixture of salt and ice in order to maintain temperature.

The invention of the wooden freezer with paddles on it was an amazing breakthrough for ice cream (Bellis, 2009). The procedures in making ice cream consists of several steps which will all start from dairy farms. From the dairy farms, trucks will then transfer the products in preparation for the ice cream but before everything else, it is a must that every equipment must be sanitized.

The ice cream mixed will be poured down into a container.

The mixing will begin to freeze the sides of the container at about twenty degrees Fahrenheit as soon as the dasher blades start scraping the mix thereby enabling the air to be incorporated together with the ingredients. The process is fast because two gallons of 2. 5 bags of ice cream mix will shortly become ten gallons of ice cream in less than fifteen minutes ( South Carolina Curriculum Standards, n. d. ). There are many ways of making ice cream. It can be processed with or without an ice cream maker. Fresh, homemade ice cream can be made quicker.

Making ice cream without the ice cream maker is a more speedy process because every batch of ice cream is frozen in salt and ice. In making home made ice cream, one needs half a cup of sugar, a quarter teaspoon of salt, one cup of milk, three egg yolks, a tablespoon of vanilla extract and two cups of whipped cream. Two cups of fresh fruit bits can be added as well for extra flavor. The sugar together with the salt and milk has to be put into the top of a double broiler with water in the bottom pan. Once the water boils, temperature will rise thereby ensuring that the mixture will not get overcooked.

The beaten egg yolks must be combined together with the sugar and milk and leave it there to cook until such time that bubbles can be seen around the mixture. Once the mixture is done, it must be left at a room temperature to cool down. Once the custard has cooled the vanilla extract must be stirred into it together with the whipped cream. Afterwards, the ice cream mix must now be transferred into a zip-lock plastic bag which must be put inside a gallon sized zip-lock bag filled with ice cubes at about one third for the ice cream freeze.

It is easy to know once the ice cream is done because the mixture will feel like paste not liquid. Fruits can be added to have a variety of flavors. For instance, about two cups of strawberries can be mashed with half a cup of sugar. When ready this fruit can be mixed into the original ice cream flavor and viola there goes the homemade ice cream (Sci-toys. com, n. d. ). There are many ways to create mouthwatering ice cream and no matter what the process is, ice cream industry will always be a success because people just cant get enough of this dessert. 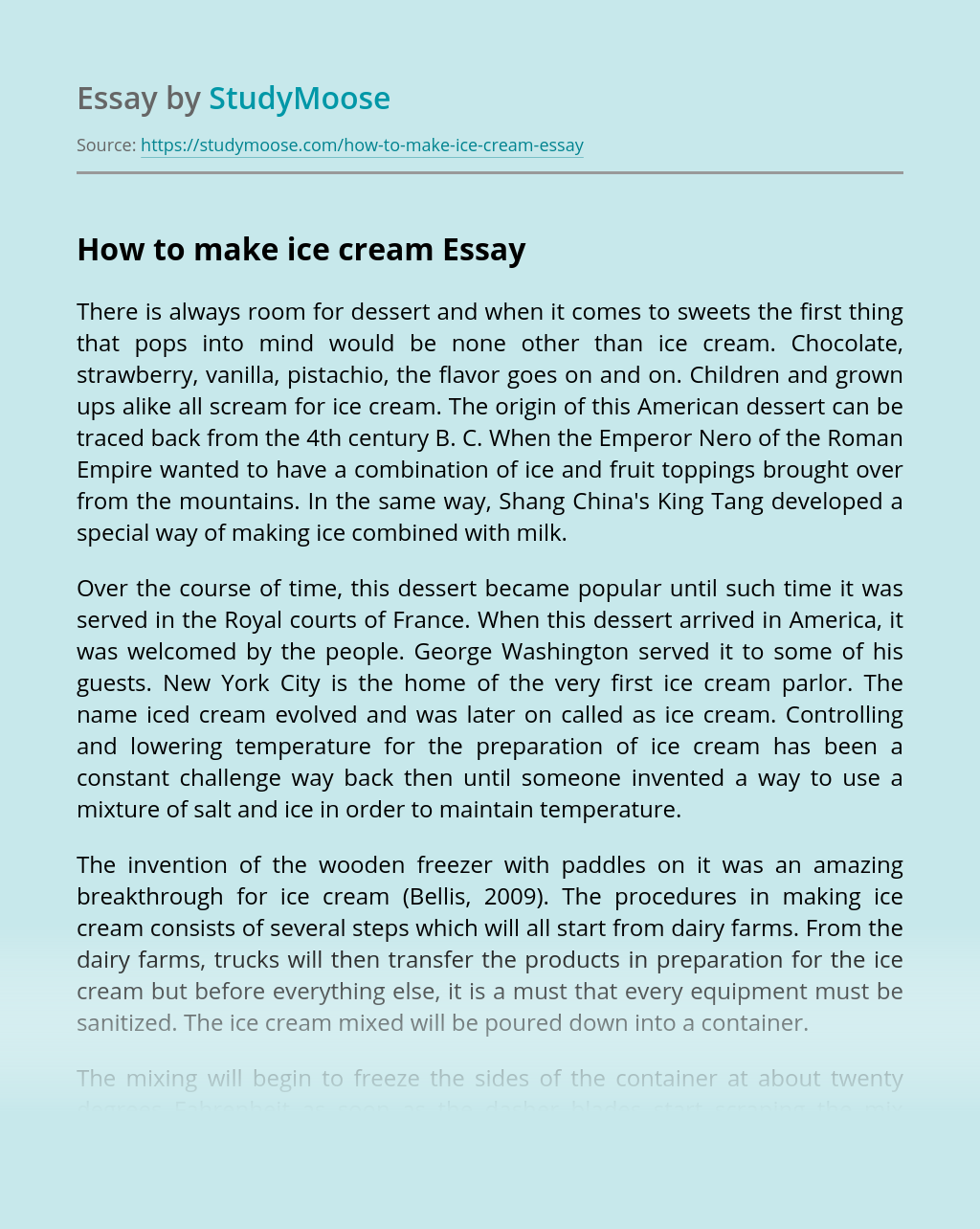