How successful were the Labour Government reforms of 1945-51?

From 1945 to 1951, Clement Attlee was prime minister of the Labour Government. He aimed to improve the Social and Economic Conditions. The main aims to improve the social conditions were: to create a fairer society and improve the lives of ordinary people, build on the recommendations of the Beveridge Report, and slay the five giants (Want, Disease, Squalor, Ignorance, and Idleness). The main aims to improve the economic conditions were: fulfilling the Nationalisation programme and reducing unemployment. Labour had to recover from being identified with the failures of the 1930s.

Don't use plagiarized sources. Get your custom essay on
“ How successful were the Labour Government reforms of 1945-51? ”
Get custom paper
NEW! smart matching with writer

The Beveridge Report of 1942, written by William Beveridge, stated the five giants of evil and need to introduce welfare. Attlee wanted to build on these points. The conservatives wanted to try and find the money to fund this, but Labour found the money to pay for these reforms even with their economic hardship.

Want is involved with the needs of the citizens. Britain was already known as a ‘welfare society’; although, there were still differences in health and living standards between social classes and regions.

Disease is another giant that was slayed. The National Health Service (NHS) became effective on July 5, 1948. Citizens could receive medical, optical, and dental services for free. It was established by Aneurin Bevan (Minister of Health and Housing). The NHS covered everyone after 1945. Before 1945, healthcare was not free. Setting up the NHS was not easy because Bevan had opposition. His opposition was Conservatives and people who had vested interests in the medical profession. Bevan needed support from the British Medical Association (BMA), but the BMA was against doctors being salaried state employees because they believed that it could weaken their professional status. Bevan had to compromise; he said that consultants were allowed to have private patients and work in the NHS. Doctors would get some of their salary from the state and the rest would come from a fee for each patient treated.

The NHS did improve health; the number of infant mortalities and patients with tuberculosis and other diseases had decreased. Housing was quite successful in a way (Squalor was another giant); many houses were built. 1.5 million Council houses were built and quarter of a million pre-fabricated houses were built. Although, with the amount of houses being destroyed by bombs, not enough houses were built. It was successful because many people were able to move into one of these homes. Ignorance and Idleness were two of the five giants; ignorance was based around education and idleness was based around employment. Both of these ‘giants’ were part of the economic conditions. Economic policies also included rationing, loans from the USA, and economic planning. They may have suffered more austerity with food shortages and rationing than during the war. Ignorance was dealt with by implementing the Education Act from 1944. This act was proposed by the conservatives but implemented by the Labour government.

The Education Act made secondary education compulsory until the age of 15. All students had an exam at the age of 11 which decided what school they should attend. If they failed this exam, they were not expected to stay at school after they turned 15; these students were the ones who were expected to get the unskilled jobs. The main focus was on the primary sector due to the baby boom. This act was successful because many students learned about being a skilled worker. The negative side of this act was that this did not give working class children equal opportunities. The last of the five giants is idleness. Attlee’s aim was to create and maintain full employment. Full employment was maintained through the period 1945-51; unemployment did not get higher than four percent.

Nationalisation was one way in which unemployment was able to stay low. Improving idleness was very successful during this time period. A failure to improve economic conditions was a deficit. Britain’s exports to the USA had declined enough to create a deficit. Creditors lost faith in sterling and recovery wasn’t seen until after the 1951 election Overall, the Labour government was very successful with their aims to improve the social and economic conditions in Britain. Even though there were some failures and obstacles, such as not enough housing or Bevan’s opposition, the Labour government did improve lives, they slayed the five giants, and they reduced unemployment.

How successful were the Labour Government reforms of 1945-51?. (2016, May 03). Retrieved from https://studymoose.com/how-successful-were-the-labour-government-reforms-of-1945-51-essay 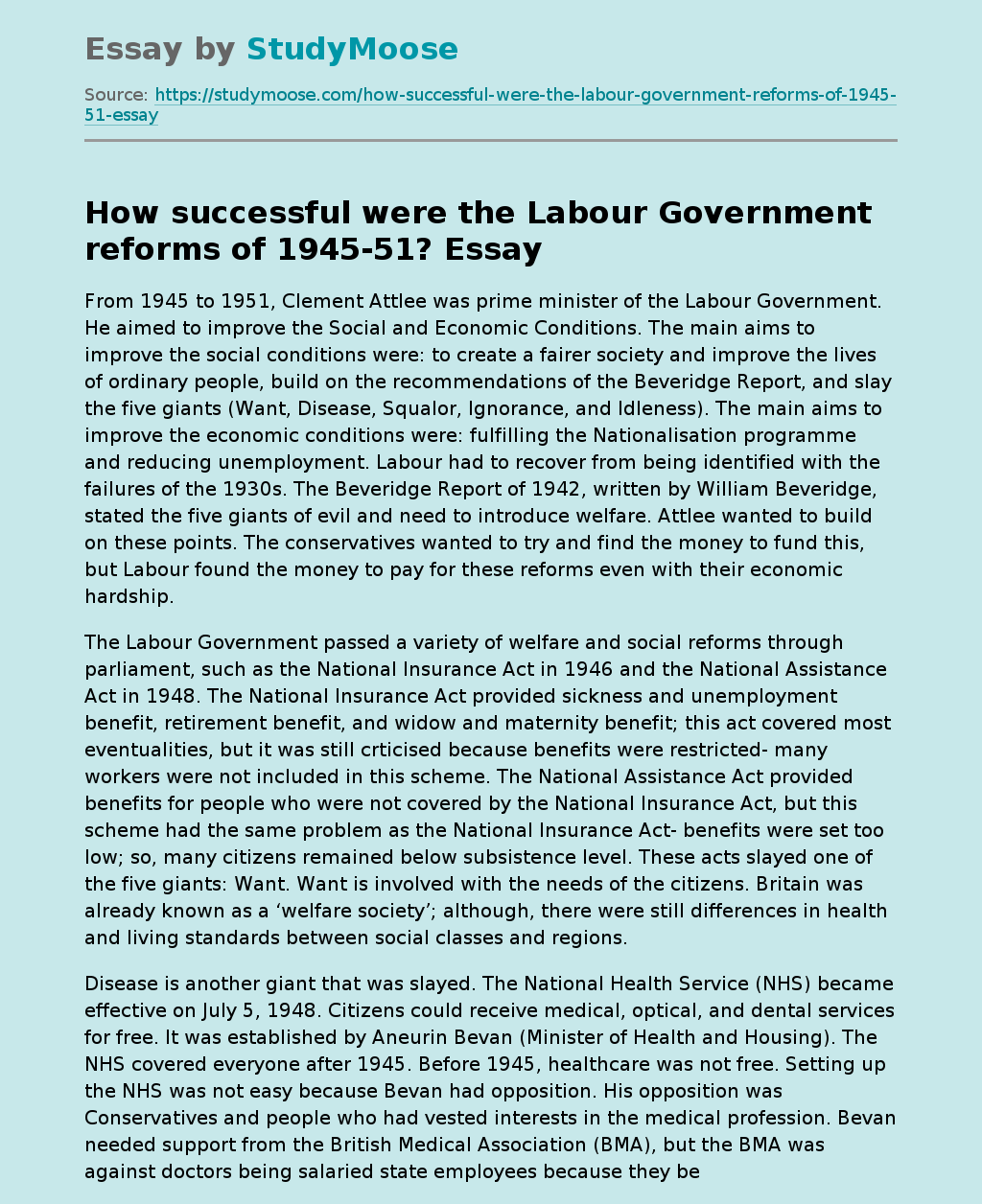