How Serious Were The Threats To Elizabeth?

There were three main threats to the throne of Elizabeth I; The Spanish Armada in 1588, The Northern Rebellion in 1569 and Mary Queen of Scots. These threats can be seen as both very serious and not so serious. Whilst Elizabeth was Queen, she faced many threats as a result of all the religious tension at the time. All three of these threats involved the removal of Mary’s throne and so can be seen as serious. The most serious of which was the threat from Mary Queen of Scots due to her legitimate claim to the throne and strong support.

Turn in your highest-quality paper
Get a qualified writer to help you with
“ How Serious Were The Threats To Elizabeth? ”
Get high-quality paper
NEW! AI matching with writer

On the one hand, the threat from Mary Queen of Scots was the biggest threat to Elizabeth I. This is because Mary had a legitimate claim to the throne as she was Henry VIII’s sister’s great granddaughter; therefore she was second in line to the throne. Mary Queen of Scots also had a lot of Catholic support, a lot of the European Union wanted England to be Catholic, and so they would have wanted Mary to be on the English throne and not Elizabeth.

The Spanish Armada was also a large threat to Elizabeth during her reign. This threat was posed by The King of Spain, King Philip II.

Philip and the Spanish were attacking England, because they wanted Mary on the throne. The Spanish Armada was a large threat to Elizabeth in 1588, because the Spanish could easily have attacked England; they had a lot more men and boats than the English. The Spanish Armada also posed as a large threat, because it was a new type of threat that no King or Queen had experienced before; the threat was also posed from another country, this makes it a lot more serious than it would have been if it had have been posed from an Englishman.

Also, the way that Elizabeth dealt with the problem that faced her sent out a large and clear message to both England and other countries in the world that she was very strong and powerful and was also a great Queen that knew how to deal with rebellions and attacks. Also, by the time that the Spanish actually reached England, they had lost a lot of men and a lot of boats.

They had lost over half of their boats and men so would have been distressed and shaken; therefore they would not have wanted to attack again and they would not have been very strong when they finally reached London, where the wanted to attack. The last threat, was the Northern Rebellion, this was not a very large threat to Elizabeth, because Elizabeth could have stopped the rebellion. Elizabeth gathered an army of twelve thousand men to attack the Earls, Dukes and their army. Also, nobody in the South would support the Catholic rebellion so Elizabeth could use that to her advantage. Since everybody in the North support their rebellion, the Earls and Dukes would only attack in the South. This meant that Elizabeth I only had to worry about the Dukes and Earls rebelling in half of the country. This is why the threats posed by Mary Queen of Scots, King Philip II and the Earls and Dukes of the North were not very serious to Elizabeth I.

As a conclusion, I think that the threat posed by Mary Queen of Scots was the biggest threat to Elizabeth I. Then the Spanish Armada and finally the Northern Rebellion. I think that Mary Queen of Scots posed the biggest threat, because she had a legitimate claim to the throne and she was a catholic. The Spanish Armada was also a big threat to Elizabeth, because they could easily have attacked England and they had a lot more men and boats than England had. The Northern Rebellion was not such a large threat as no-body South of England would support their rebellion, therefore it was not a very successful rebellion. This is how serious the three threats were to Elizabeth I during her reign.

How Serious Were The Threats To Elizabeth?. (2016, May 05). Retrieved from https://studymoose.com/how-serious-were-the-threats-to-elizabeth-essay 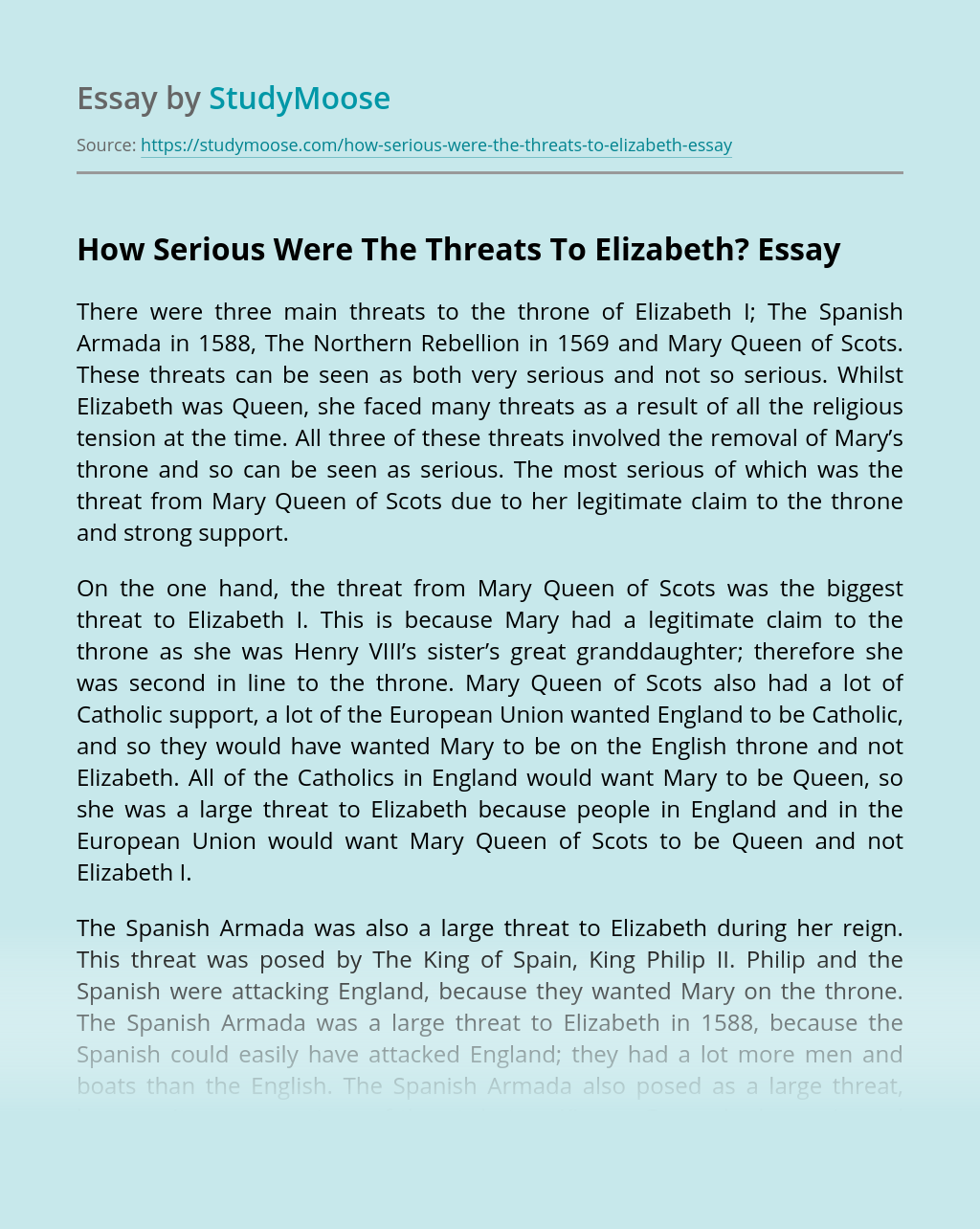 Turn in your highest-quality paper
Get a qualified writer to help you with
“ How Serious Were The Threats To Elizabeth? ”
Get high-quality paper
Helping students since 2015
Stay Safe, Stay Original