How Raising Minimum Wage Will Hurt The Economy

Minimum wage jobs are not meant for people to rely on as a permanent career. Dorn, Copper, and David say, “Minimum wage … is not enough to live on.

Don't use plagiarized sources. Get your custom essay on
“ How Raising Minimum Wage Will Hurt The Economy ”
Get custom paper
NEW! smart matching with writer

” These minimum wage jobs are not made for living a good quality life. It offers experience to help people find a job worth living on while helping by offering temporarily financial support. Having a minimum wage jobs as a permanent career will cause others not able to have some income and a job to start a new life. Mary DelPrincipe talks about how “minimum wage jobs were not designed for a career… but a chance to gain experience.

” Her information shows that minimum wage jobs help with gaining knowledge in a work place environment and not meant for earning money to live on for life. These jobs give, mainly inexperienced, workers a chance to gain a valuable life lesson while earning some income. Minimum wage jobs are not created to have as a career. Minimum wage jobs were, however, designed to help inexperienced workers with some financial support for a short period of time.

If minimum wage were to increase it would cause job insecurity. In a carton by Henry Payne, it depicts “an increase in minimum wage for workers will result in less of a job market for those who want a higher wage.

” The job market will become a major issue for people who want a higher minimum wage. Many are in need of a job, but will be unable to obtain one if minimum wage were to increase. This leads to many people unable to acquire a job, in which many are in need of. These people are in need of a job to learn what working a job is and to gain an important life lesson of working. Charles Lane gives valuable information on how “last time minimum wage was increases … [it caused a] loss of 300,000 jobs.” Minimum wage is hurting not only the job market, but every person who works a minimum wage job. Requiring employer to pay more for minimum wage workers will only deplete jobs that many desperately need. Many of those who want an increase in minimum wage will find out that they could be losing their job because employers cannot afford the labor expenses. Job insecurity will become a great problem if minimum wage were to increase because manual labor is what cost the most in many of businesses.

Raising minimum wage will cause people not able to gain important skills needed for jobs. These skills are necessary to make a worker move up in a company. Nick Schulz tells of how raising the “minimum wage will make it less likely [workers) will get that important entry level job.” Receiving a minimum wage job is very important for everyone to receive. These jobs give workers vital experience that is necessary to succeed in the job market. As our world becomes more advanced and complicated with new technologies, companies are in need of skilled workers to build them. Without an entry-level job, workers will not have skills to work on today’s technology. Richard Berman also emphasizes that if “minimum wage increase [it] accelerates the rate at which technological innovations replace entry-level jobs.” With less entry level jobs, workers will not gain skills needed for an upper level job. Losing these jobs will not only affect the job opportunity for new workers, but people who are in need of an entry-level job to learn the basics of working.

Raising minimum wage will hurt the economy and the people more than it would help. Hasset and Strain tell of how “people who keep their job get more money; [many of] those who lose their jobs, or fail to get new ones, suffer.” Hasset and Strain are showing the effect of how raising the minimum wage is hurting the economy by causing many to lose jobs. This leads to fewer people spending money because they cannot find a job. Without these minimum wage jobs, these workers will fall deeper into poverty while relying on everyone else to pay them through their taxes. Charles Lane says, “Employers probably make several adjustments … lower labor turnover, greater organizational efficiency, ‘wage compression’ (lower wages higher up the payscale) and small price increases.” Raising minimum wage may help some, but in the end it causes many others to suffer. People would be forced to take salary cuts, higher prices on merchandise, and even lose jobs. This leads to the economy being drastically affected by the increase of minimum wage.

The facts overwhelming show how an increase in minimum wage will affect everyone. Important jobs will be lost, economy will become devastated, inexperienced workers will not gain valuable experience, and everyone will feel the effect of it. Rich, poor, retired, just starting to work will feel their wallets become more emptied. Society needs to have another way to help people who want an increase minimum wage, and those who will be hurt by the increase of minimum wage.

How Raising Minimum Wage Will Hurt The Economy. (2021, Dec 13). Retrieved from https://studymoose.com/how-raising-minimum-wage-will-hurt-the-economy-essay 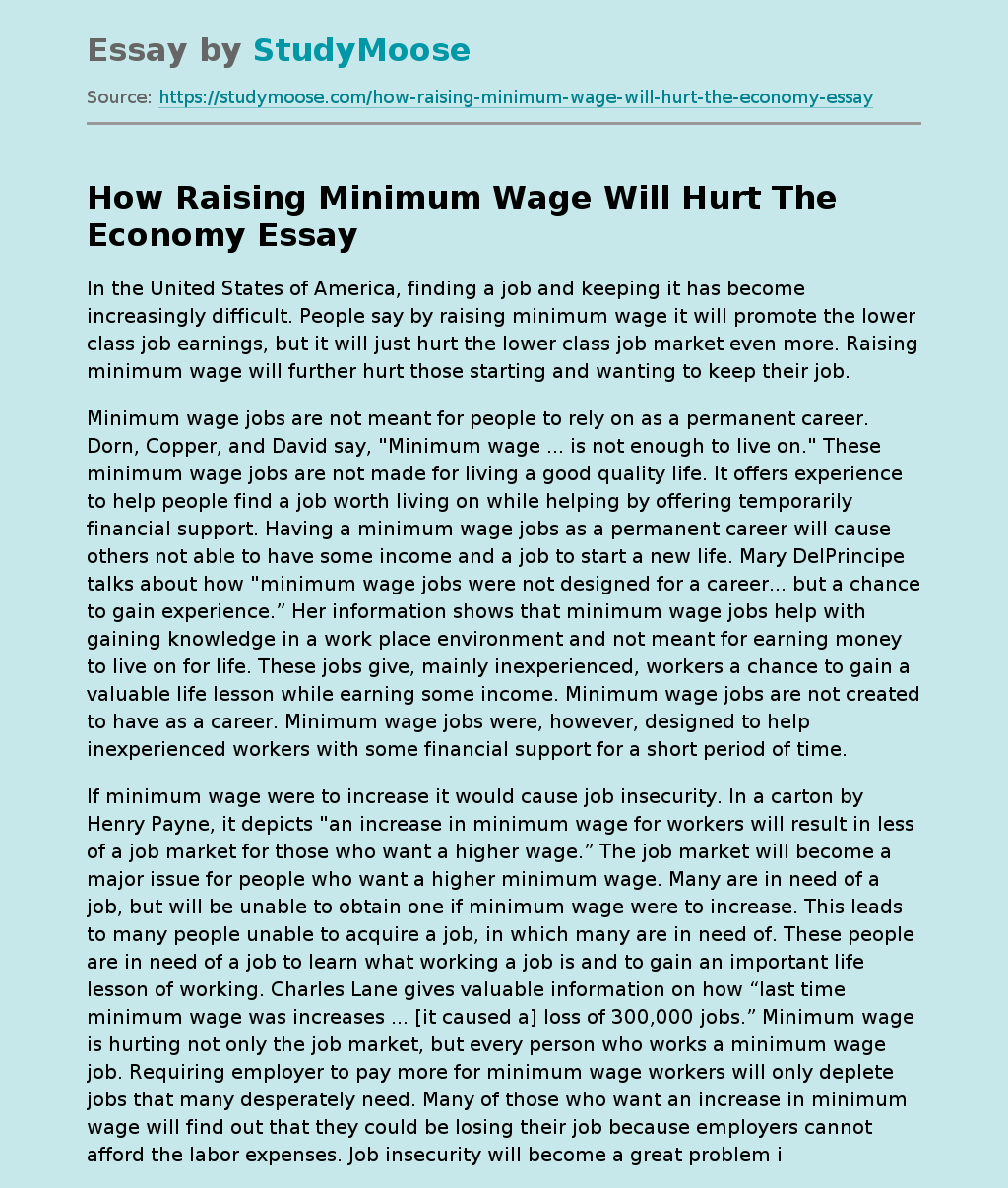