In this new generation research Indicates that many young people today spend a lot of time In front of the TV or on computer games and thus leading to the Implication that media Influences antl-soclal behaviour. Psychologists have researched Into explanations on media’s influence on antisocial behaviour, one of these explanations being the social learning theory (SLT). This advocates that we model our behaviour on behaviour that we observe; whether it’s antisocial or pro-social behaviour.

Children can be expected to imitate behaviour illustrated through the media that is successful in gaining the model’s objectives.

Don't use plagiarized sources. Get your custom essay on
“ How Media Influences Antisocial Behavior? ”
Get custom paper
NEW! smart matching with writer

Further supporting this explanation, evidence from ‘natural experiments’ are used as authentication to the link that media Influences not lust antisocial behaviour but violent behaviour as well. One Psychologist, Phillips (1983) reinforced this theory by analysing crime statistics for the 10-day period following the publication of heavyweight boxing contests shown throughout the nation.

The research exhibited a significant rise in the number of murders during that said period, thus highlighting how media influences antisocial behaviour.

Through further interpretation on the social learning theory this explanation could e questioned, Despite all the psychologists experiments on the theory there Is no real evidence to support it. For instance, in 1993 two boys murdered James Bulger and were said to be inspired by the video ‘Child’s Play, however later it was conducted by Cumberbatch (2001) that no known link was ever found.

It should also be taken into consideration that if two young influential boys were able to play such a violent and Impressionable game what type of parental figures they had on a dally basis and attachments they had with their primary care giver.

It can be advocated hat the children had other outside affects that caused they to commit such a crime and that media was not the only reason and thus concluding that the media isn’t the only cause for antisocial behaviour. Furthermore, another explanation for media’s influence of antisocial behaviour is Justification.

This vindication implies that violent behaviours may provide a Justification for a child’s own violent behaviour, or perhaps even go as far as providing moral guidelines regarding what Is acceptable and unacceptable. It Is suggested that children who act more aggressively watch violent elevision programmes In order to relieve their guilt and Justify their own aggression and thus advocating that the media allows them to channel that emotions and making their actions acceptable in their own mind. On further evaluation it should be prominent that programmes have mixed prc-social and antisocial messages.

For example, the 198ffs television series ‘The A Team’ portrayed the typical heroic figures as behaving violently and so signifying that the negative effects of such programmes support the concept of Justification as Illustrated by Liss and Reinhardt (1979). Concluding that the use of aggression by pro-social characters provides an impression of moral justiflcation to their antisocial and violent behaviour, with which children already identify. Moreover, an alternative insinuation of explaining media’s influence on antisocial behaviour is Cognitive Priming.

This refers to the activation of already existing aggressive thoughts and feelings. It highlights why children observe one variety of aggression on television and commit another type of aggression after. imprinting the shown behaviour and recall the memories in a later stimulation in the resent. The magnitude of cognitive priming was established by Josephson (1987). The psychologist looked into this by using hockey players as participants who were deliberately frustrated and then shown a violent or non-violent film where an actor held a walkie-talkie.

This resulted in throughout the hockey game the player who had seen the violent clip behaved more aggressive in comparison to those whom where shown the non-violent clip. Josephson advocated that the walkie-talkie held by the referee acted as a trigger for aggression within the hockey player. And so through his it is demonstrated how media can influence behaviours by acting as a catalyst to existing aggressive thoughts. Additionally, another explanation for media’s influence on antisocial behaviour is desensitation.

This contention underlines that under normal conditions, anxiety about violence inhibits its use. It suggested how media violence may stimulate aggressive behaviour by desensitising children to the effects of violence. This therefore results in the child being more accepting for aggressive and antisocial behaviours. However this is contradicted by Comberbatch (2001) who rgues that people might get ‘used’ to screen violence but that this does not necessarily mean a person will also get accustomed to violent or antisocial behaviours in their everyday life in the real world.

It is claimed that screen violence is more likely to make children frightened’ then frightening thus contradicting the indication that the media desensitises the public to violent and antisocial behaviour. Overall, these explanations conduct valid explanations into how media influences antisocial behaviour. We are able to determine that media does in fact affect the way in which a person behaviour but to what extent is questionable. 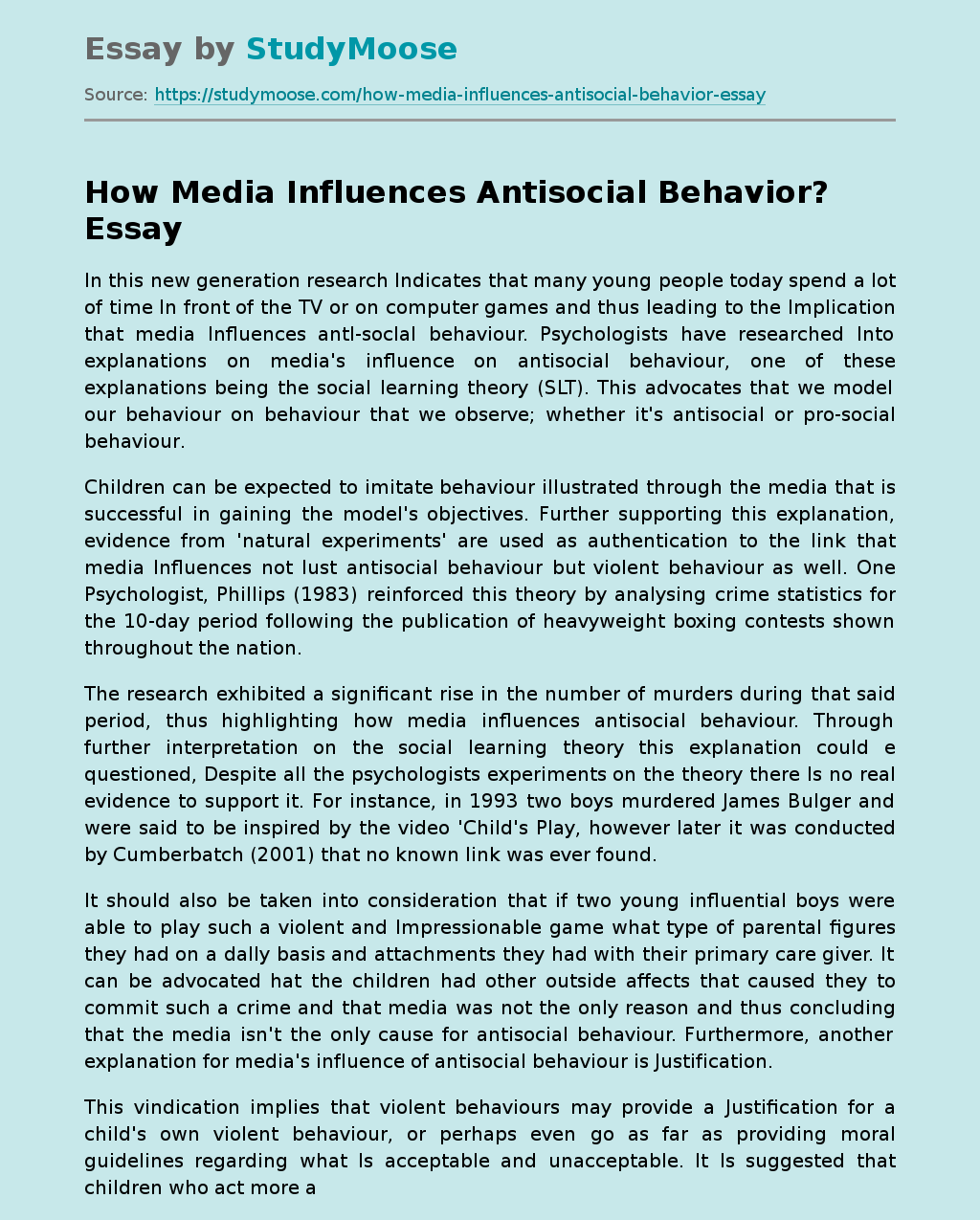