How Media Has Changed the Nature of Politics?

Media disseminate information to the whole society, it can help citizens access the information about the current political situation, become a “known citizens”, Provide information foundation of their political participation. For example, after “9. 11”, The U. S. government released the fight against terrorism policy at the first time, and convened a meeting with the person in charge of the U. S. mainstream media, with the requirements of the media to not publish any reports that is not conducive to the national security of the United States, and require all media absolute “obey orders”.

Don't use plagiarized sources. Get your custom essay on
“ How Media Has Changed the Nature of Politics? ”
Get custom paper
NEW! smart matching with writer

This is the United States Government use the power of the media,to seek legitimacy evidence for its own foreign policy and behavior(Xingping. Kang, 2001) . 2. Influence public opinion. The media is not only the performance of public opinion channel, but also can through extensive and in-depth reports on specific events, to causing the attention of the public to the event, and to mobilize as many people in the community to express their views on the current topic.

For example, public opinion and propaganda made ?? y the United States for the war in Iraq, despite the fact that Iraqi President Saddam Hussein and nothing to do with terrorism or Al Qaeda. However, in the United States concerning Iraq reported, Terrorism, Al Qaeda and Osama bin Laden has topped the list, The frequency of use of these words accounted for 45% of all words. This has led to the “New York Times” and “Time” magazine which has been known to oppose the war, support rate up to 48% of the Iraq war(Patrick O.

Set the agenda. The media can increase the amount of coverage on certain issues or projecting reported some problems, to influence the audience awareness of the importance of these issues. It can set the social agenda, and forced the government to include these issues in their own agenda. In January 2010, Google Inc. in the United States to attack the Chinese government review of the search results on its Chinese website, and search services transferred to Hong Kong from the mainland of China.

In this event, the Secretary of State and the President of the United States position, expressed support for Google’s decision to criticize China’s control of the network information, and included China into the “restricted network freedom”. This can be seen as the first formal confrontation in the field of media diplomacy between China and the United States, but certainly not the last(Ren Hai,2011). 4. Political socialization.

The media is also an important political and social forces, is the main source that people can access the information’s in their daily lives, various media continues transport to the public some information’s which are after a selection and views, also the analysis and evaluation of these data and ideas. So that people consciously or unconsciously accept it, Thus forming a particular political tendencies and attitudes (Jan H. Kietzmann,2011). 5. Monitoring the government.

Media as a criticism, people have long recognized that media has benign operation of the role of democratic politics. Once the government scandal exposure, often provoke strong national jingled. Because of this, the media often referred to as the “fourth power” outside of the legislative, executive and judicial. Thus, politics is not a complete control over the government in today; the media has a great influence on the politics policy making and political nature. Here we are with the U. S. government, for example. As we know, The U. S. overnment through the media coverage, widely publicize and disseminate the government’s foreign policy to the public to complete foreign policy to convey. Also attempt to seek the public’s understanding and support and recognition by this method to promoting their foreign policy. After World War II,The United States in order to anti-communist, containing the Soviet Union and China, they has used the media to vilified and demonize China. “Time” magazine has written: “Now there have an external group ruled the Chinese mainland and the people, and they did not bring a better life to the Chinese people.

In the past, the admirable Confucius concept has become a part of the Chinese people; humor, generous, patience and kindness are the traditional virtues which the Chinese people have. But these traditional Chinese virtues are no longer and ceased to exist in the world of communism. The Communist Party use the chaotic state of the war, mastered this country after the war, And forced the Chinese people into the new model. Territorial expansion is their main foreign policy now, these make a significant threat to the United States”.

Under the influence of this propaganda, public opinion in the United States undergoing significant changes. American Opinion Research Center (AORC) survey in 1947 showed that64% of Americans have a Good impression of the Chinese people, Americans evaluation of the Chinese people is just after the British, Swedish, French, and higher than the German, Soviet and Japanese. 1951, in the same opinion poll, this number dropped to 21%. This fully shows that the Government promote through the media coverage of the government wants to achieve foreign policy and effect.

The media provide a lot of information to the government, thus becoming the basis for government policy makers to formulate foreign policy, and the media can mobilize the formation of public opinion. Thus affecting the political policy-making. In 1964, after President Johnson taking office, American public support for his Vietnam War policy was as high as 72%. but since then the media bring the more and more bad news for the war to the American people, especially with the television development of 1960s in the United States, TV news has disclosed that a large number of U.

S military has caught in the quagmire in the Vietnam War and with many casualties, also the war brought disastrous consequences to the Vietnamese people. American people rising tide of anti-war. In 1968, the famous TV presenter Walter Krona Kay asserts, “It was a useless war, the war is unwinnable. “After hear this phrase Comments, President Johnson realized that he will never regain public support for the war again. So that in the history of the United States “for the first time by a news host announced the end of the war”(Thomas R. Dye, 1992). The U. S. edia development until today, the American public have more and more way to contact to the internal affairs of the United States, and the United States as the world’s “most democratic” countries, their policy-makers has consider more and more views from the people. The media, as a bridge between the political and popular, the role is getting stronger, It convey the opinion of the public, While also strengthening Or twisted opinion. This makes the media not only in the formulation of political policies, but also played an irreplaceable role in diplomatic relations. Media involved in the diplomacy, diplomacy into the media.

This is the mean relationship between today’s society, politics and media, but also in the context of economic globalization and the information technology revolution, the media plays an increasingly impressive role in politics and international relations. Thus the term “media diplomacy”. 1991 Gulf War,CNN launched a “24-hour practical News” program, The U. S. President George W. Bush and Iraqi President Saddam Hussein to convey a message to the other by CNN. CNN has become one of the leaders of the global news, and also this make CNN became the 16 of the members of The United Nations Security Council (Royce J.

Ammon, 2001). The term “CNN effect” has also become the terminology of international political communication research. After the end of the Cold War, with the Internet on a global scale popularization and expansion, the interaction between media and political diplomatic has become more and more closely. Increasingly direct impact on the pattern of the world, quickly deepened. For example, in the 2009 Iranian election, The U. S. government by supporting social networking sites such as Twitter, YouTube to Support for the Iranian opposition, this causing political instability in Iran.

There are inborn connection and interaction between media and politics, politics offer media necessary background and condition, and offer rich information resource, at the same time also normalize, promote or restrict the development of media through the law and organization in itself system (Joseph. S. Nye, 1990). Conclusion Media, as collector, spreader and communicate for information, on the one hand, it increase the mass’ opportunities to know government policy, to participate in policy making and to expresses itself benefit, to upervise the administrative action of government, guarantees that government public policy is legal, democratic and scientific; on the other hand, media is also a important arena that carries out political socialization, mold itself image and enhance government legitimacy, and government improve the ability to exchange with social mass using this public space, has promotes intercommunion and support greatly between them, contrarily this balance accelerate them develop healthily.

How Media Has Changed the Nature of Politics?. (2018, Aug 22). Retrieved from https://studymoose.com/how-media-has-changed-the-nature-of-politics-essay 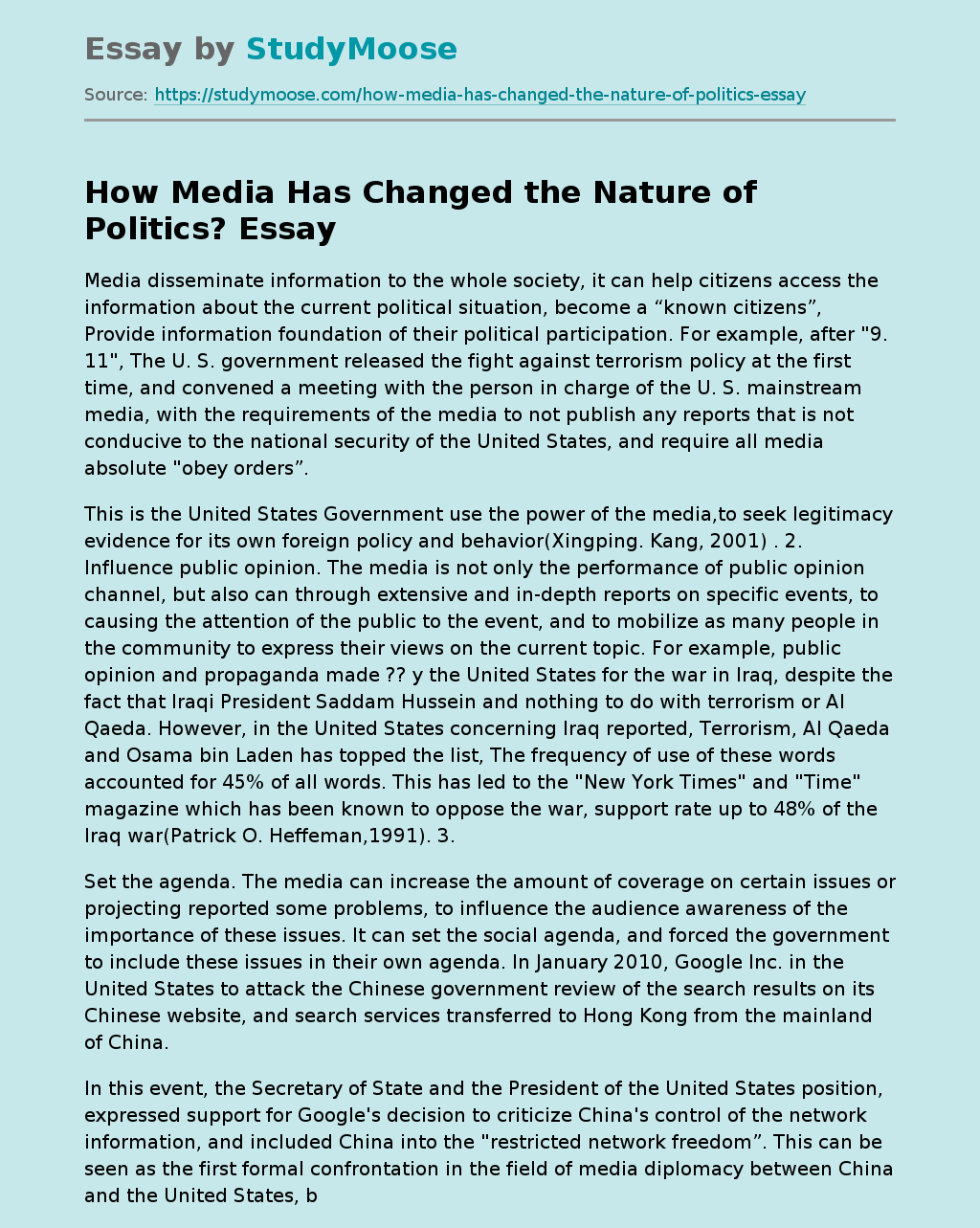