How Mary Rowlandsons Puritan Beliif Influenced Her Narrative of Her Captivity?

Some people are just better suited for things and situations then others. If you want a really hard math equation done maybe you should look in the depths of the library. If you need help moving into a new house and are moving heavy stuff go to the nearest weight room. Everyone, for the most part, is usually good for something. In this narrative, religion is everywhere.With verse after verse being quoted from the Bible. Some people have many Gods while most have one reining all-powerful being.

Don't use plagiarized sources. Get your custom essay on
“ How Mary Rowlandsons Puritan Beliif Influenced Her Narrative of Her Captivity? ”
Get custom paper
NEW! smart matching with writer

In the case of Mary Rowlandson, I believe her being a puritan and having the strong puritan beliefs made her more suitable for dealing with the trails she was about to face then say a everyday church goer. Being the wife of a preacher it shows in the text Mary was solidly grounded in her faith making and well knowledgeable

See more: how to start a narrative essay introduction

The Puritan Belief is one that was quite popular in the colonies at that time.

Major Puritan beliefs are taken seriously. A Puritan had to be a hard worker, be honest about everything and to be able to be self sufficient even though they believed that life on this earth was of little importance, that they shouldn’t worry too much because life is temporary. That all people’s faith is already predetermined from the second they were born. From Mary’s point of view she was very obedient to her husband. The Father was the backbone of Puritan households; he had control over everything and led the family financially and spiritually.

In the start of Mary’s captivity she is living in Lancaster with her family when the natives attack them. Almost everyone on the village is brutally killed or wounded or taken into captivity and bargained for goods from the colonist for their lives. Mary’s family members were either killed or wounded. She witnessed the brutality of the Indians as she describes in one man in her village wounded in the ground begging for his life and the natives ripped him naked and removed all his bowels (Salisbury, p.68). Now separated from all but her very wounded daughter the natives begin to take them northwest.

Eventually her daughter, Sarah, passes away from her injuries. This trail in Mary’s life for many people would spell doom. I don’t think if Mary were a devout Puritan she would have not survived the hardship of losing her daughter plus the abuse of being a captive to the natives. Even with her strong faith Mary writes about her waning faith, the bitterness in her heart and intense sadness she is feeling During this time Mary describes the natives of being like demons. Workers for the evil doings of Satan (Salisbury, p.71). That the natives are more then just enemies of war but enemies of the Christian faith and the spread of the goodness of God.

Saying many times over she yearns for the company of fellow Christians. While writing this narrative Mary constantly revaluates her faith. Even saying at one point after the death of her daughter then she has not been showing the lord enough attention on the Sabbath. Saying at one time “The next day was the Sabbath: then I remembered how many Sabbaths I had lost and misspent, and how evilly I had walked in Gods sight”(Salisbury, p.74). Mary realizes that she must keep her faith if she is going to survive this ordeal. She always quotes scripture to understand or squander any obstacle she faces.

Even in the smallest things she quotes scripture, while walking she simply slips a quotes a Psalm, “When my foot slipped, thy mercy, O Lord, help me up”(Salisbury, p.96). Reinforcing her puritan beliefs that God had a plan for her. That everything that was happening to her was in an already predetermined plan. God though seems from my point of view was watching over Mary. When her wounds are worsening she happens to run into a British man that had similar injuries and showed her how to heal them.

During one of the Indians raids on the Medfield colony, one of the natives recovered a Bible that they allowed Mary to read(Salisbury, p.76). When she needed food somehow she found a way to get food or some was provided for her. King Philip is a tribal leader that even though the war bears his name is not so violent him-self and makes Mary’s survival chances brighter. Mary gets word from a man that her husband is alive and she gets to see her children which gives her hope that she will live with them again. All these things some small some larger made God seem present with her.

Mary knows the Puritan belief requires them to be self-sufficient. She foraged for nuts and grain and started sewing to trade for either meals or goods like tobacco, which she could sell. Mary is always honest with the natives. Never ling to them about her plans or what she thought. Mary Rowlandson’s narrative on this story did show me how during rough times during the early colonies these religious puritans held strong.

Though some beliefs of the new bay puritans may be drastic if seems it was the perfect religion for that time. Throughout the story Mary is tempted with signs of rescue but never truly curses God or defiles him. Personally Mary’s story is very similar to Jobs, who she quotes one or twice, in which God allows Satan to bring many hardships on him to challenge his faith because Satan believe since God blesses Job with many things when all is taken from him he will abandon God and curse him.

Job never does though saying to his wife, “Shall we only except the good things from God and not the Bad?” Mary’s perseverance eventually leads to her release and she is reunited with most of her family. Her Puritan belief kept her mentally and spiritually prepared for what she had to go through and inspired her to write such a powerful story of faith and hope.

How Mary Rowlandsons Puritan Beliif Influenced Her Narrative of Her Captivity?. (2017, Apr 02). Retrieved from https://studymoose.com/how-mary-rowlandsons-puritan-beliif-influenced-her-narrative-of-her-captivity-essay 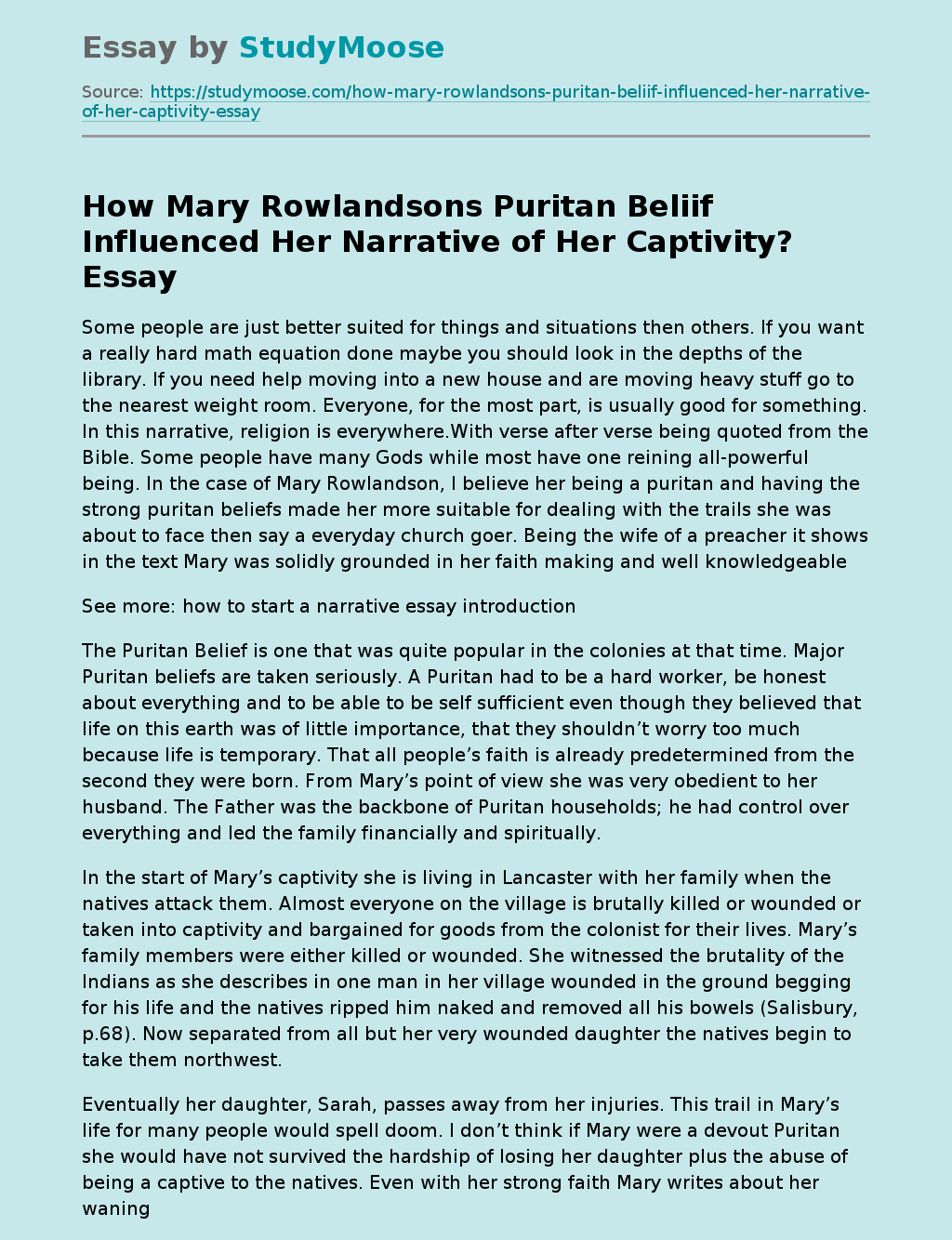