How Macbeth Lost His Morals?

Macbeth is a very controversial character in many ways. Many believe he was an evil man from the beginning. While some believe he became evil over the course of the play. Macbeth’s morals gradually deteriorated throughout the play. Macbeth’s soliloquy’s, conversations, and his actions show how he lost his morals bit by bit in after each murder.

In act I, Macbeth was confronted with the thought of killing King Duncan and stealing the throne. His soliloquy (I.7.1-28)is his response to the possible actions he is about to take part in.

Don't use plagiarized sources. Get your custom essay on
“ How Macbeth Lost His Morals? ”
Get custom paper
NEW! smart matching with writer

He basically said he felt bad because as his kinsman and his host he should protect him, not kill him. Also the fact that he was such a good king made him hesitate at the thought of killing him. In his discussion with Lady Macbeth after his soliloquy, Macbeth states, “We will proceed no further in this business. / He hath honored me of late…”(I.7.31-32) Macbeth was talking about how King Duncan has honored him recently and how he cannot go through with killing him.

Then at the end of act I, Lady Macbeth convinces him to go through with the murder. Then after the murder of King Duncan, Macbeth flips out and begins to rant and rave. He said after the murder talking with lady Macbeth, “To know my deed, ’twere best not know myself.”(II.2.73) This showed his extreme guilt and regret of the crime he just committed.

1.47-72) he stated his fears and hatred of Banquo because he was so good. He then called for two murderers to kill Banquo and his son, Fleance. Macbeth needed no motivation for this action other than fear, and he had no hesitation in this decision as with the murder of King Duncan. But after Macbeth knows Banquo is dead, he saw his ghost at his dinner party, taunting him (III.4.40-105). This was a form of his conscience making him feel guilty for what he did. Though his reaction to Banquo’s murder is equally as volatile as King Duncan’s, the build up preceding the murder shows a stark contrast. Before the murder of King Duncan, Macbeth had resisted the thought much longer than with the murder of Banquo, which he had no major moral dilemma’s before hand. It seemed as though it was becoming easier and easier for Macbeth to kill without remorse.

Finally, in act IV Macbeth makes a statement that showed his moral deterioration very well. After talking with Lennox about how Macduff had fled to England, Macbeth said in his soliloquy, “…From this moment/ The very firstlings of my heart shall be/ The firstlings of my hand.”(IV.2.146-148) Macbeth said that now the first thing that came to mind would be the first thing he did. The next thing he said was, “The castle of Macduff I will surprise,/ Seize upon Fife, five to the edge o’ the sword/ His wife, his babes, and all unfortunate souls…”.(IV.2.150-152) The first thing that came to his mind was to kill Macduff’s family. He had no second thoughts like the first two murders, no last minute guilt trips either, just cold blooded killing. When Macbeth meets Macduff in the battle field he said, “Of all men else I have avoided thee./ But get thee back, my soul is too much charged/ with blood of thine already.(V.8.4-6) That was a little sign of remorse by saying that he has too much of Macduff’s family’s death on his soul, that he doesn’t want another.

Macbeth’s moral deterioration throughout the play is very evident if one looks at the moments preceding and following the murders. In the first quell, there was a long build up and many moral objections by Macbeth. Also after the murder, Macbeth was extremely disturbed by what he had just done. Then, before the second killing, there was less of a build up and no moral objections by Macbeth. After the murder of Banquo, Macbeth still felt some guilt, which manifested itself in the hallucination of the ghost. Finally, prior to the third murder, there was no moral dilemma about about killing Macduff’s family. Following the murder, he showed almost no remorse, except for the comment made to Macduff. Macbeth was a good man in the beginning of the play, but his morals deteriorated more with each murder he committed.

How Macbeth Lost His Morals?. (2016, Jun 18). Retrieved from https://studymoose.com/how-macbeth-lost-his-morals-essay 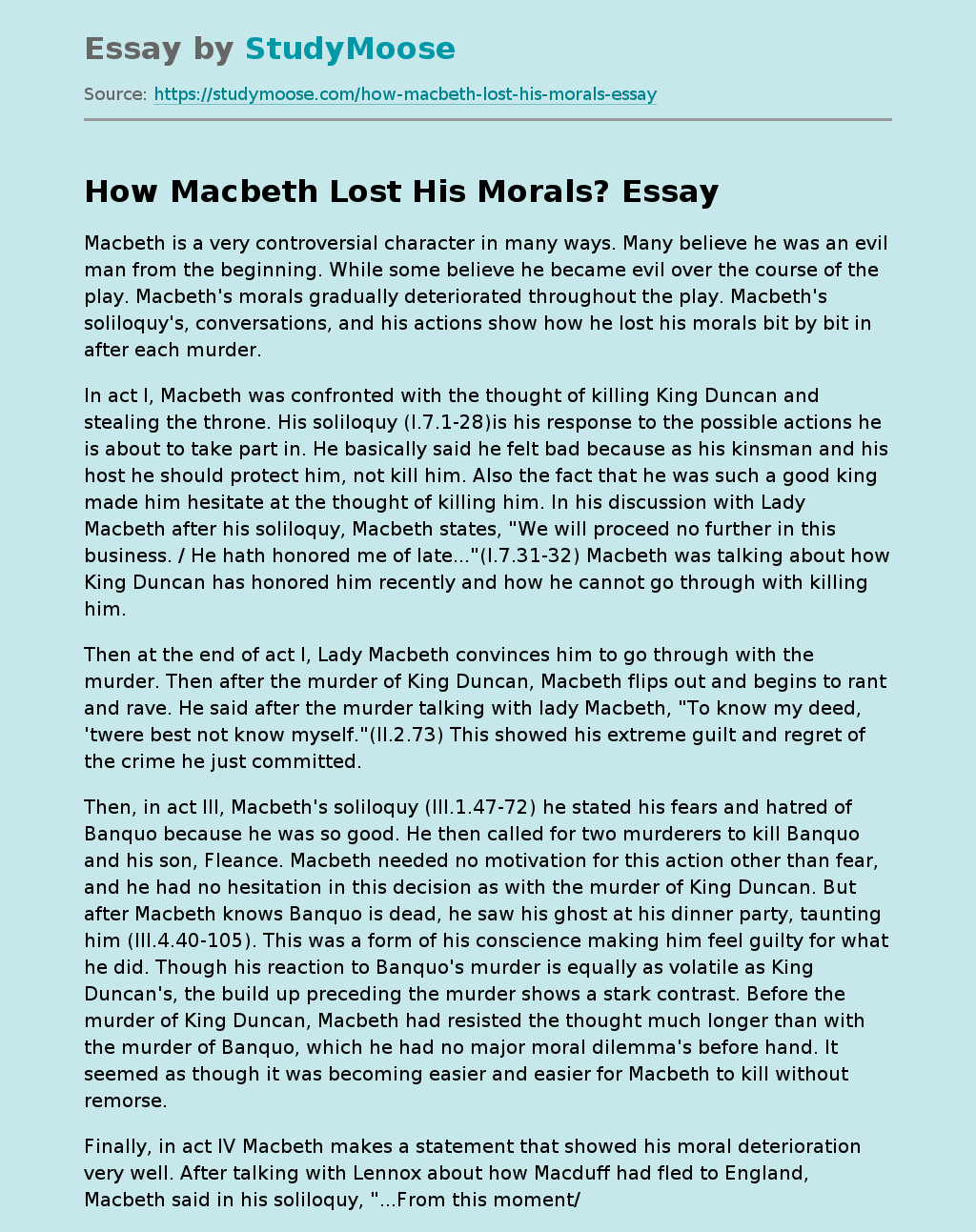