How Is Sibling Rivalry Explained in the Taming of the Shrew?

William Shakespeare is considered to be one of the most famous writers of all time. His ability to develop such characters from kings to beggars is a major aspect of his achievements and so the audience can see parts of their own personalities represented on stage. As a result of Shakespeare’s authentic characters, the relationship between Katherina and Bianca in The Taming of the Shrew is utterly realistic. It shows every bit of the forever living concepts of sibling rivalry such as jealousy, envy and hate.

Don't use plagiarized sources. Get your custom essay on
“ How Is Sibling Rivalry Explained in the Taming of the Shrew? ”
Get custom paper
NEW! smart matching with writer

One of the ways that the sisters’ rivalry is explained is the constant humiliation that Baptista, their father, causes in public. Gentlemen, importune me no farther,

For how I firmly am resolved you know;
That is, not to bestow my youngest daughter
Before I have a husband for the elder.
If either of you both love Katharina,
Because I know you well and love you well
Leave shall you have to court her at your pleasure.

In simple words, he means that he wants Katherina off his hands as soon as possible but when Katherina is offered to Bianca’s suitors, she is profusely turned away like a piece of rotten meat. Her humiliation at this point is complete; she is discussed in public like scandalous gossip, so Kate tries to reveal her fury to her father, “I pray you, sir, is it your will/To make a stale of me amongst these mates?” She is being publicly humiliated, has no defence for her pride, and reacts with haughtiness to cover her embarrassment that is caused by no other, but her own dear father.

To top this, Baptista announces that he is to hire schoolmasters “to instruct her [Bianca’s] youth.” and she is further humiliated through neglect as he makes no mention of Katherine’s studies.

Kate then bridles at this and makes her exit, hurt by recurring displays of neglect. Everything is compared with Bianca and Kate realizes the way that her father favours Bianca. So to cover up her shame and embarrassment caused by her father, Kate argues with her sister, hoping that she can disguise her destroyed feelings. Similarly, Bianca’s personality adds to Kate’s rebellious actions. On the outside, Bianca seems to be a gentle and sweet young woman, a “young, modest girl” Lucentio calls her. In reality however, she is a sneaky sister, with a foxy personality. “My books and instruments shall be my company, On them to look, and practise by myself.” Her deliberate call for attention increases Kate’s shrewdness. In a modern adaptation of this play, you can tell the difference between Bianca’s good and bad side. Behind everyone’s back, as the audience, we can see how cruelly Bianca teases Katherina about her beauty and love life by sticking up her middle fingers, swearing etc.

The girl that Lucentio calls “modest” has no problem with parading her modesty for her own benefit and so she displays fake innocence. Without any complaint, she says that books and instruments will be her company, thus gaining the sympathy of her father, Lucentio and her two suitors. In Act 2, Scene 1, Kate bounds her sister’s hands and torments her about Bianca’s suitors showing Katherina’s jealousy and the accusations of favouritism with which she confronts her father.

“I will go sit and weep/Till I can find occasion of revenge” (35-36). This is an immature response but with this, we can tell that she is hurt and she seeks to mend this hurt by revenge; thus we can understand her shrewish ways. Another way sibling rivalry is manifested in this play is the acts of physical violence. Often, it is the older that lashes out at the younger and for example, in Act 2, Scene 1, there are displays of physical aggression when Bianca enters with her hands bound. This scene also ties in with the two sides of Bianca and in the adaptation of this play that I referred to earlier, we can notice that Bianca is not the least upset about having her hands bound; she is using this as another example where she can mock and laugh at Katherina: Is it for him you do envy me so?

Being angered by Bianca’s insolence, Katherina lashes out and strikes her, saying, “If that be jest, then all the rest was so.” (2.1.22) Katherina cannot stand being ridiculed, especially when the person criticizing her is her own sister. At the end of the play, the reader becomes more aware that there is more to the sister’s relationship that it appears, as a switching of personality occurs. ‘Bianca, get you in/Go in, Bianca.’ The two women’s contrary behaviours are shown and in the first scene Bianca has to be told twice to enter the house, indicating she is not as tractable as she is thought to be in the eyes of others. Katherine on the other hand, when she first meets Petruchio, is told that when she is to be married on Sunday, Katherina does not protest.

This is strange as the readers view her as the ultimate shrew on the outside but Katherina’s reaction should have been a more violent and physical one. However, the final scene clarifies the women’s true nature, as Bianca become the disobeying wife and Katherine portraying the perfect Elizabethan wife, therefore demonstrating the result of the sister’s rivalry. Shakespeare, then, has represented the conflicts between the Minola sisters in many ways including: tense relationships, physical violence, the constant struggle for attention, harsh words and affection from their father. The interesting aspect of the sister’s ‘journey’ is that we, as readers, cannot just read Kate and Bianca like a cover of a book. We can understand Kate’s need for attention and love, we can sympathise her hurt and pain because of Bianca. Their relationship is well written, realistic, and allows the audience to experience their own feelings towards sibling rivalry and recognize those in Katherina and Bianca.

How Is Sibling Rivalry Explained in the Taming of the Shrew?. (2016, Oct 20). Retrieved from https://studymoose.com/how-is-sibling-rivalry-explained-in-the-taming-of-the-shrew-essay 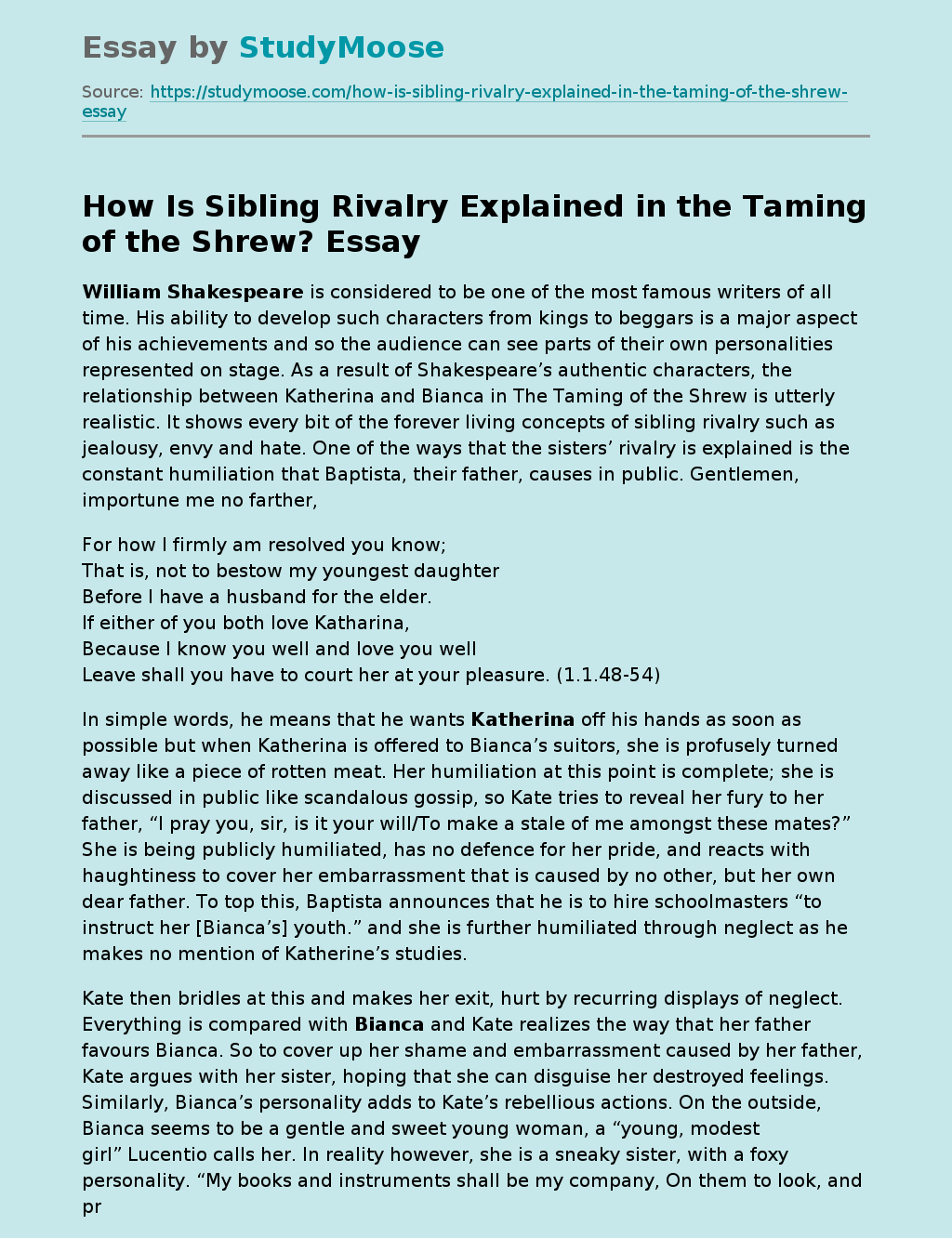