How is linguistics a scientific study

When linguists claim that their discipline is the scientific study of language, they have in mind certain principles which distinguish between a scientific and a non-scientific study of language. First, linguistics is objective, that is, it considers all languages to be equal. For a linguist, there are no ‘primitive’, ‘pure’, ‘beautiful’, ‘cultural’, or ‘sophisticated’ languages. Objectivity is difficult to attain because language is so familiar to us that we can hardly dissociate ourselves from it.

The objective study of language is hindered by various cultural, social and historical misconceptions about certain languages.

Linguistics has demonstrated that any language, however ‘primitive’, or ‘underdeveloped’ its people may be, is as complex and highly organized as any other language spoken by a ‘civilized’ people. There is no intrinsically ‘richer’ or ‘purer’ language, because each language serves the functions needed by its speakers. The linguist deals with all languages equally with the aim to construct a general theory of the structure of the language.

Second, linguistics is basically an empirical, not a speculative or intuitive, discipline in the sense that it examines specific data (e.

g. speech and writing), and proceeds by verifiable and justifiable operations. It relies on observation and experiment, and uses formalized principles and a theory capable of formulation. It aims to analyze the data and make generalizations about the regularities encountered in the linguistic phenomena under study.

Third, linguistics obeys the following canons of science : exhaustiveness, consistency and economy. Linguistics deals with all relevant data, i.e., it analyzes all the facts of language that fall within its scope, and studies systematically every linguistic element from all angles.

It allows no contradictory statements and requires that all parts of analysis be consistent with the whole. Repetition is not allowed either, and more economic statements containing fewer concepts or symbols are preferred to longer ones.

Thus, we can state that linguistic is a social science which can be subsumed under the empirical sciences. It deals with, among other things, how people behave and interact with each other in society by means of language. Linguistics is not as accurate as the natural or ‘hard’ sciences like physics, chemistry or biology, whose scientific status is established and irrevocable perhaps what makes linguistics less precise than the natural sciences is the fact that its subject matter (spoken or written language) is part of the human behaviour in general.

How is linguistics a scientific study. (2016, Sep 12). Retrieved from http://studymoose.com/how-is-linguistics-a-scientific-study-essay 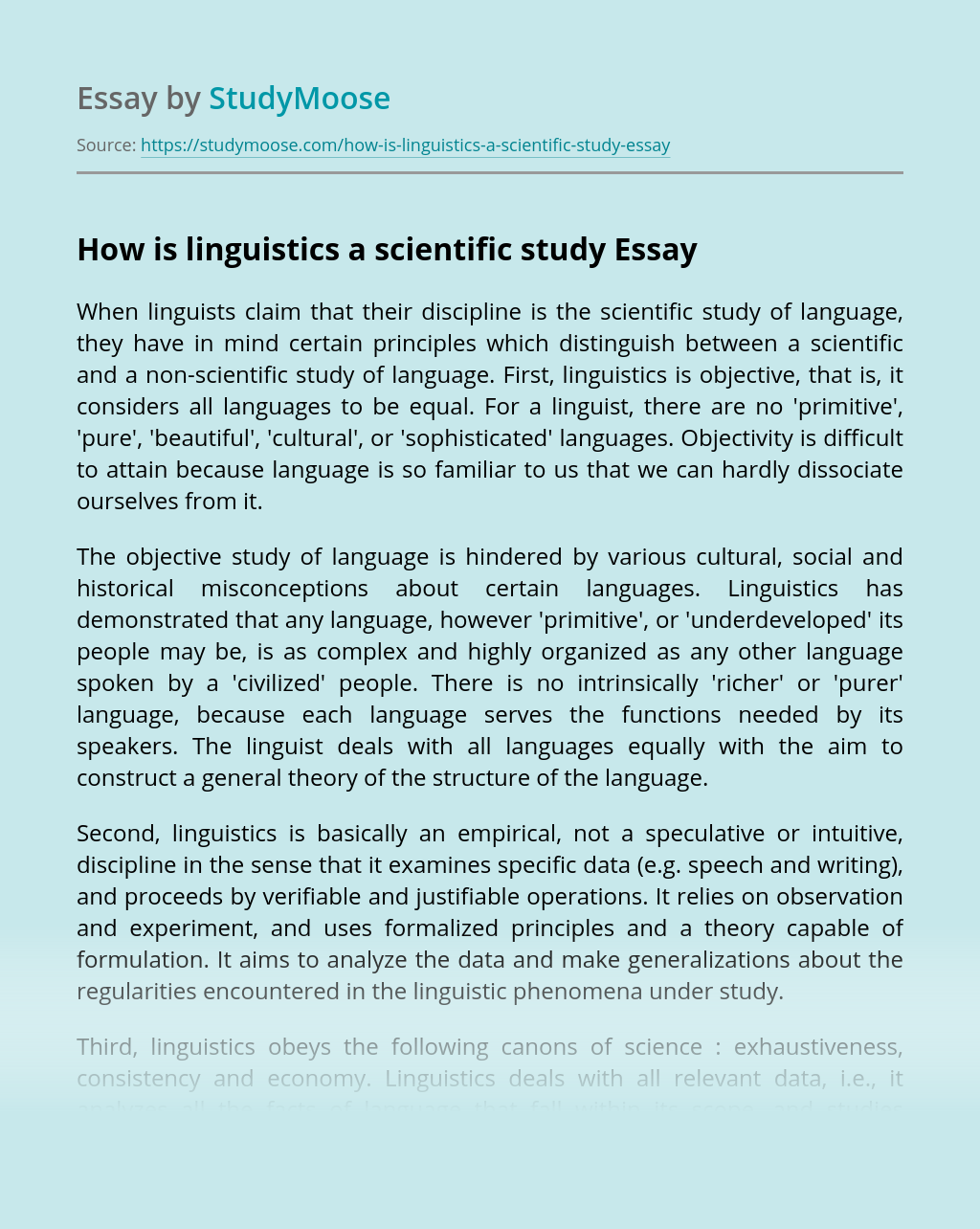 Don’t waste time
Get a verified expert to help you with How is linguistics a scientific study
Hire verified expert
$35.80 for a 2-page paper
Stay Safe, Stay Original