How Is Conflict Presented in Bayonet Charg

Conflict often has harmful effects, including causing death and destruction, so it is usually viewed negatively. However, conflict can also bring out positive traits in people, and the people involved in it may be respected. “Bayonet Charge” imagines a soldier’s experience in battle. “The Charge of The Light Brigade” recounts the story of the charge made by the Light Brigade in the Battle of Balaclava.

One way conflicted is presented in “Bayonet Charge” is through the use of language.

The language used, portrays the soldier and his actions/movements. Ted Hughes uses sibilance to portray the soldier’s actions as well as feelings. For example, “raw-seamed hot khaki, his sweat heavy Stumbling…” The use of sibilance here mimics the squelching mud. The repetitive‘s’ sounds recreates an image of the soldier walking through mud. The word ‘khaki’ suggests that the person being described is a soldier as it is normally associated with the military uniforms. The word ‘heavy’ suggests that the soldier is uncomfortable and his movements are unnatural.

The word ‘stumbling’ suggests that the soldier is disoriented and could also suggest that his movements are clumsy. Another way language is used to present conflict is through the use of similes. For example, “Sweating like molten iron from the centre of his chest”.

The phrase ‘molten iron’ suggests a burning, abject terror at the heart of his being. On the other hand, “The Charge of the Light Brigade” uses metaphors such as “Valley of Death” to present conflict. This phrase forebodes the charge as it makes it sound certain that the soldiers are going to die.

It also suggests the commander has made a mistake as he has sent them into the ‘valley of death’. This makes the soldiers more courageous as they are marching into their own deaths. It also creates the allusion to psalm, where faith instils courage in the face of death. Another way language is used to present conflict is through the use of rhetorical questions. For example, “was there a man dismay’d?” The rhetorical question implies unequivocal bravery and shows the gallant nature of the men. It shows that they were used to obeying orders and leaving the thinking to their generals.

The form and the structure of the poems also plays a part in getting the message across to the reader. “The Charge of the Light Brigade” has a clear and powerful rhythm and rhyme scheme that suggest the energy of the battle. The Light Brigade’s determined gallop towards its destruction is emphasised, by repetition, from the first two lines of the first stanza of the poem: “Half a league, half a league,/ Half a league onward…” Once the order has been given, the fate of the men was sealed – they had no choice but to follow their terrible destiny to its conclusion. The weapons they faced are also repeated, sometimes with slight variations, for example, “Cannon to the right of them, / Cannon to the left of them,” to emphasise the danger faced by the cavalry and their great bravery. Repetition creates a sense of impatience to enter battle and bravery in the face of danger. Alfred Tennyson uses dactylic trimester to mimicking the steady galloping of their horses.

The stresses also create a “falling rhythm” which symbolises the soldiers who will fall. The poet has written the poem in 6 irregular lined stanzas. This could be to show the unpredictability of war. The word “Cannons” has been used as an anaphora for three lines which emphasises the fact soldiers are surrounded and can’t escape. The sheer amount of cannons blocks their vision therefore suggesting they couldn’t anticipate the attack. The form of the poem is a narrative story.

This is because the poet is describing the attack to his audience. “Bayonet Charge” uses onomatopoeia, alliteration and assonance and the senses to bring the images described to life. “Stumbling across…” is an awkward line to read, which evokes the sensation of running across a muddy field. The use of enjambment throughout the poem quickens the pace and emphasises urgency and unpredictability of war. The use of medial caesuras achieves a variety of effects, from reflecting the soldier’s tiredness to deliberately making the action feel like slow motion. The use of iambic pentameter in some lines helps the poems flow and recreates a heartbeat

How Is Conflict Presented in Bayonet Charg. (2017, Feb 04). Retrieved from https://studymoose.com/how-is-conflict-presented-in-bayonet-charg-essay 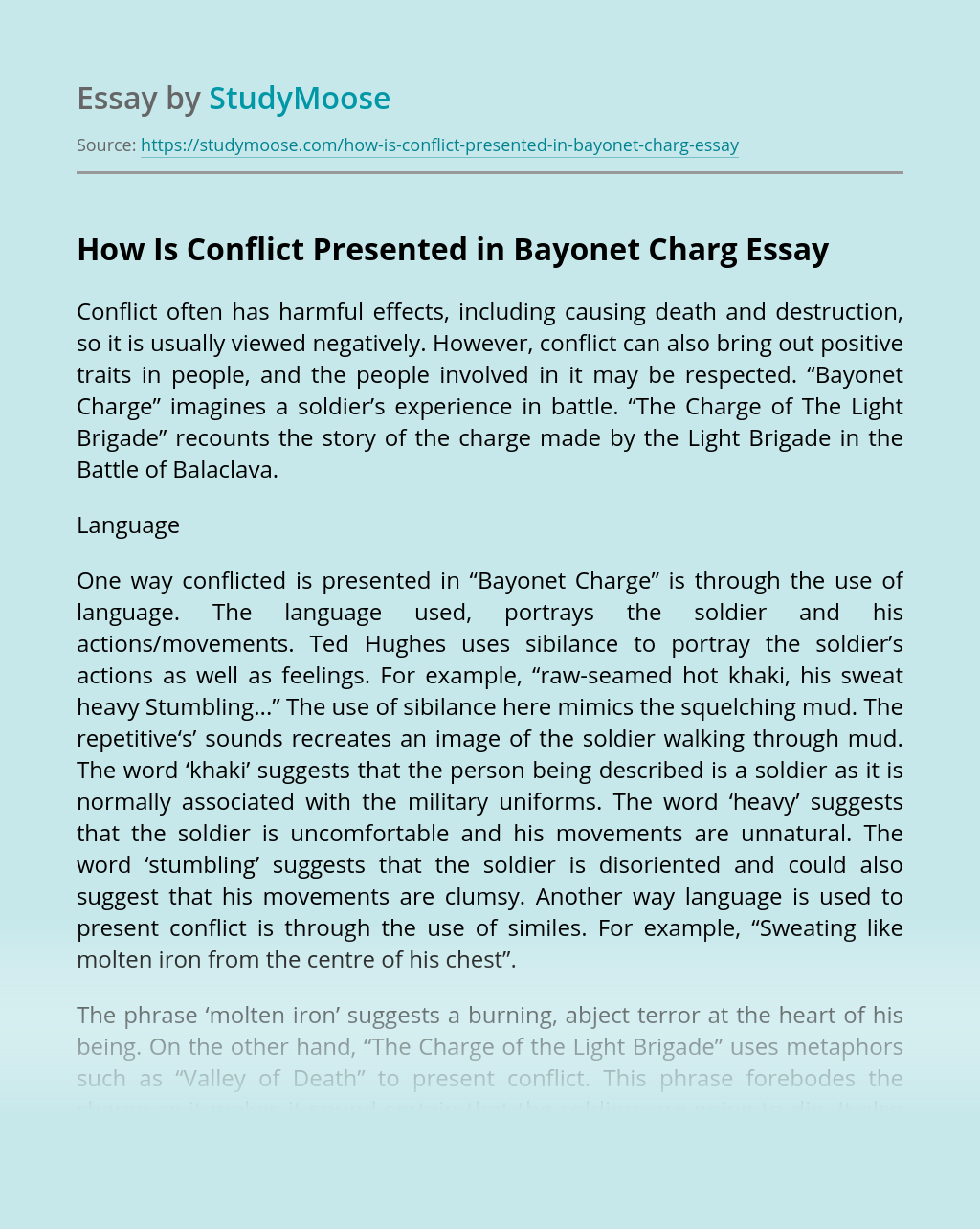 John Milton sums up the content of the whole poem in the very first thirty-two lines. However, the reader is entrusted to uncertainty when he declares: “That to the height of this great argument/ I might assert Eternal Providence,/ and validate the methods of God to men” (I. 24-26). Milton is uncertain about which ways...

Compare ‘Island Man’ with one other poem, to show how the poets use people to explain the conflict that can exist between and within different cultures People are at the centre all communities. They embody the values, customers and ideas that particular culture possesses. By examining how people behave and think, it is possible to...

Get Essay
A Poem Flag written by John Agard

Throughout this essay I will be looking at how the theme of conflict is presented in the poem ‘Flag’ written by John Agard. ‘Flag’ is a poem that is presented as a conversation between a naive questioner and a responder about the power that a national flag or symbol can have over people, especially people...

Literature has elements by which we can examine the piece (book, poem, play, etc.) composed. These components are; plot, character, setting, style, structure, viewpoint, dispute, diction, foreshadowing and significance (Scholes, 1991) 3 of them will be discussed here further. The plot of the literature is the method the story goes, the line of the story,...

The use of deception as a tool in both Popul Vuh and Paradise Lost is a very important aspect in both stories. Both epics main characters use trickery and deception as their primary weapon to work towards accomplishing their goals. The Hero Twins in Popul Vuh use deception and trickery to kill the gods of...