How Influential K-Pop is to Filipino Teenagers

This research would not have been finished without the help of the following people: To the Researcher’s parents, Mr. Benjamin Tadeja and Mrs. Loreta Delos Santos, thank you for being a constant support. To the Researchers professor, Mrs. Bethany Marie Lumabi For giving advices and constantly correcting our errors in order to make this research a success. Most especially to Our Lord above, thank you for all the blessings you’ve passed our way.

“Music does bring people together.

Don’t waste time
Get a verified expert to help you with How Influential K-Pop is to Filipino Teenagers
Hire verified expert
$35.80 for a 2-page paper

It allows us to experience the same emotions. People everywhere are the same in heart and spirit. No matter what language we speak, what color we are, the form of our politics or the expression of our love and our faith, music proves: We are the same.” -John Denver Music is a big part of everybody’s lives. It’s basically one of the things we do or listen to when we feel certain emotions such as happiness, sadness or even anger.

Every country has their own music, its part of their culture whether it is used on religion or just plain entertainment. But for now, we will focus on a certain type of music that became one of the most influential music of today, Korean Music or simply K-Pop. In Rolling Stone Magazine, a magazine that focuses on music, popular culture and politics defined K-Pop as a mixture of trendy Western music and high-energy Japanese pop (J-Pop), which preys on listeners’ heads with repeated hooks, sometimes in English.

It embraces genre fusion with both singing and rap, and emphasizes performance and strong visuals. (Rolling Stone)

In Wikipedia, K-Pop Music was defined as a musical genre originating in South Korea that is characterized by a wide variety of audiovisual elements. Today, Korean Music became one of the most listened songs of teenagers around the world whether the language of a country or the language that is being sung in all K-Pop video is different, it doesn’t matter. But where did it all start? The history of Korean pop music is not very old. It can be traced back to 1885 when an American missionary, Henry Appenzeller started teaching American and British folk songs at a school. These songs were called changga in Korean, and they were typically based on a popular Western melody sung with Korean lyrics. The well-known song “Oh My Darling, Clementine” was for example known as “Simcheongga” (Wikepedia) In 1992, modern K-pop was ushered in with the formation of Seo Taiji & Boys, whose successful experimentation with different music styles had sparked a paradigm shift in the music industry of South Korea.. First gaining popularity in East Asia in the late 1990s, K-pop entered the Japanese music market towards the turn of the 21st century. In the late 2000s, it grew from a musical genre into a subculture among teenagers and young adults of East and Southeast Asia.

Currently, the spread of K-pop to other regions of the world, via the Korean wave or Hallyu,, is seen in parts of Latin America, Northeast India, North Africa, the Middle East, Eastern Europe and immigrant enclaves of the Western world. (Wikipilipinas.org) K-Pop was born in the Philippines indirectly through the Koreanovelas in 2003. The first Koreannovela was “Autumn in My Heart” (the first in Endless Love series) aired in GMA 7 to compete with ABS-CBN’s highest rating Chinese-novela, Meteor Garden. Through Endless Love starts the love of Filipinos to Korean Music, like one of endless love’s OST Winter Sonata, performed and remake by Faith Cuneta. During the same year, one of the first Korean music videos in the Philippines was aired on Myx, a local music channel. This is the music video of the Korean female group known as Kiss for their ballad, “Because I’m A Girl”. Not long after, the music video of Korean singer Mina for her first album’s carrier single, “Answer the Phone” also entered the local music scene. Eventually, in 2004, both of these songs were remade by Roxanne Barcelo in her debut album.’

Because I’m A Girl was made Filipino as Kung Alam Mo Lang, whereas Mina’s Answer the Phone was translated into English retaining its original title. Going back to the television, following the success of Endless Love came in Full House in 2005. Full House also starred the same actress from the first season of Endless Love, Song HyeKyo, who was paired with Korean singer-actor Rain. Rain’s debut in the local television paved way for K-Pop to be more known in the Philippines. Not long after the airing of the said series, his music videos such as I’m Coming and the more recent Love Story started to enter the charts of Myx and local FM stations. Because of the rise of Rain as a singer here in the Philippines, among other reasons, more Filipinos became interested in K-Pop; more Korean singers became known and loved like Girl’s Generation, BoA, and Super Junior. The Philippines is one of the countries which are greatly influenced by Korean Wave or Hallyu (Alanzalon, 2011).

The first Philippine K-pop convention was held in PICC last 2009 which was attended by more than two thousand K-pop fans. By tapping into social networking services and the video sharing platform YouTube, the K-pop industry’s ability to secure a sizable overseas audience has facilitated a noticeable rise in the global proliferation of the genre. Since the mid-2000s, the K-pop music market has experienced double digit growth rates. In the first half of 2012, it grossed nearly US$3.4 billion and was recognized by Time magazine as “South Korea’s Greatest Export”. But in the midst of all the good things that K-Pop gained in the past years, there would always be a development of bad things, and as K-pop grew in popularity around the world, critics shows and find the bad things that Korean music brought to others whether it’s in people or in their culture. Throughout the years, the Korean pop culture has grown into popularity for many teenagers and adults alike.

In fact in many regions of Asia, notably China, and Japan and almost the entire region of South-East Asia, the popularity of K-Pop has become so extensive that authorities and nationalist fear that it is leading to a xenocentric preference for Korean styles and ideas. And today, we witness the gargantuan amount of K-Pop merchandise adorning the shelves of shops and hundreds of thousands of Filipino teenagers and other adolescent individuals spending a substantial amount of their money on buying such merchandise, purchasing their favorite stars/singers album and not to mention concert tickets, the cheapest are which are usually enough money to buy a high technology high phone or even more essential stuff that can be of used for example a K-Pop group called B1A4 sells their general admission tickets for 9450 pesos (SM Tickets).

Why are these teenagers so willing to spend their so earned money or if they’re not working their parent’s hard earned money just for these K-Pop figures? What are the positive and negative impacts of being so captured by this phenomenon? Another problem arises like, how Korean music basically stole the interest of people on their own music; they forget patriotism, Music authorities here in the Philippines are getting worried for the increasing popularity of K-Pop, not only that the sales of Pinoy (P-pop) songs are decreasing, as years past, people started listening more to foreign songs and they don’t enjoy Filipino music anymore. People who like Korean music get addicted so much that they changed their lifestyle to be more incorporated to their k-pop idol. As a psychologist, I was curious as to why this problem arises? Is there an effect to teenagers if they listen to such kind of music? This research aims to give information on the experiences of K-pop fans, to whom and where do they express their fandom, how do they express their fandom and what influenced their fandom.

Statement of the Problem
This study intends to determine the Influence of Korean music (K-Pop) to Flipino Teenagers. Specifically, this research intends to answer the following questions: Why do Filipino Teenagers like K-Pop?

This Research intends to accomplish the following:

To know why Filipino Teenagers get addicted to K-Pop

This research focused on how influential Korean music is to Filipino Teenagers. Also this study focuses only on K-Pop music and the respondents are Filipino Teenagers whose ages are 13 years old up to 19 years old only. This research uses only an informal survey. The maximum respondents are ten persons only and studies around Metro Manila. The respondents have the right not to say their name but the age must be specifically announced and also the suggestion on how they wanted to promote patriotism are purely opinionated.

Addiction: the fact or condition of being addicted to a particular substance, thing, or activity. Changga- translated forms of American and British Folk songs in Korean lyrics Fandom- (consisting of fan [fanatic] plus the suffix -dom, as in kingdom) is a term used to refer to a subculture composed of fans characterized by a feeling of empathy and camaraderie with others who share a common interest. K-Pop- a musical genre originating in South Korea that is characterized by a wide variety of audiovisual elements. … Koreanovela- k-drama for short, refers to televised dramas, in a miniseries format, produced in South Korea. Korean Wave- or Hallyu refers to the sudden increase in popularity of South Korean culture around the world Teenagers- a person aged from 13 to 19 years.

Patriotism- cultural attachment to one’s homeland or devotion to one’s country, Xenocentric- refers to the preference for the products, styles, or ideas of someone else’s culture rather than of one’s own.

How Influential K-Pop is to Filipino Teenagers. (2016, Apr 28). Retrieved from http://studymoose.com/how-influential-k-pop-is-to-filipino-teenagers-essay 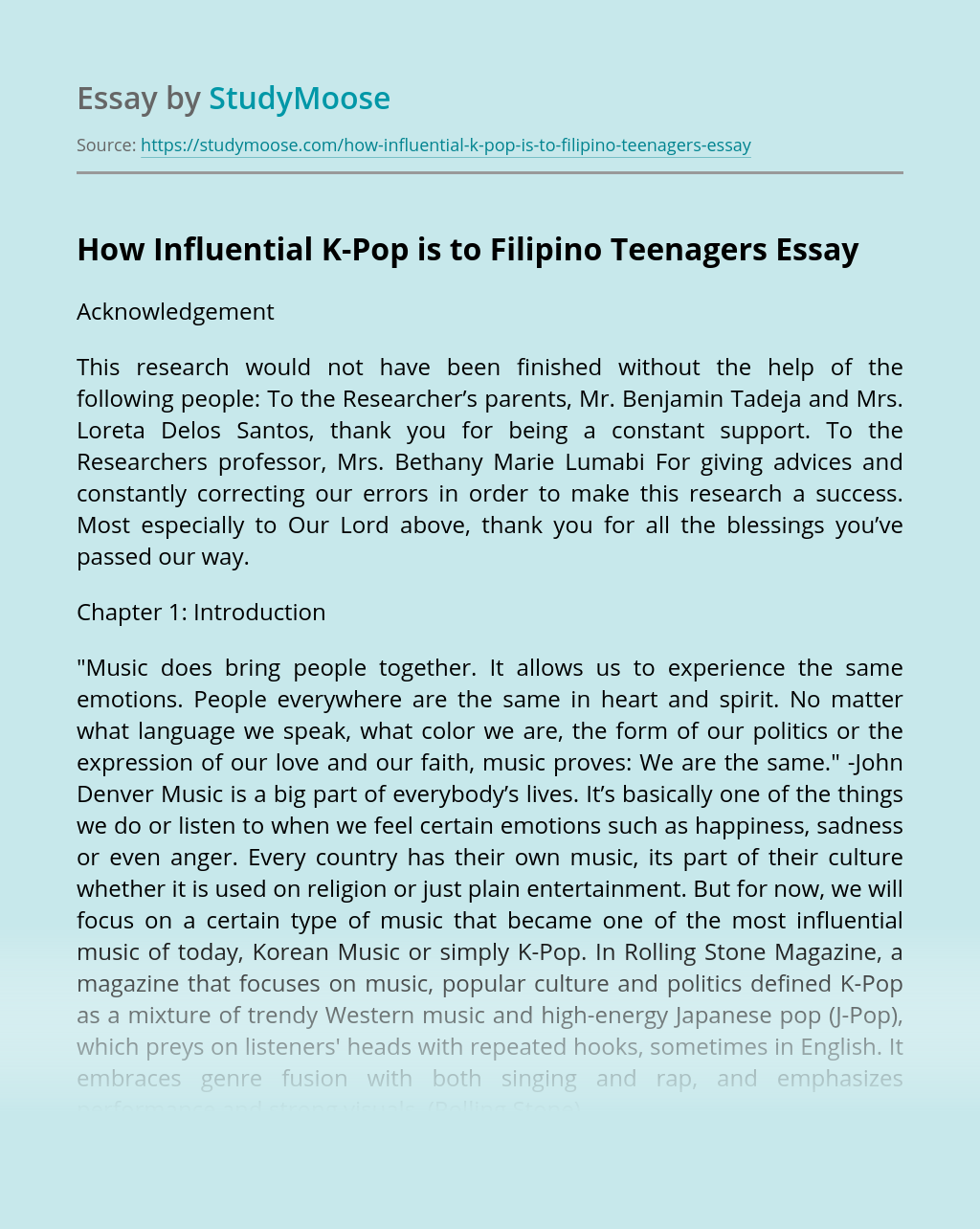 Don’t waste time
Get a verified expert to help you with How Influential K-Pop is to Filipino Teenagers
Hire verified expert
$35.80 for a 2-page paper
Stay Safe, Stay Original