How Hiphop Has Changed the Youth in Society?

Throughout the past 30 years, there has been much speculation about how negative hip-hop music truly is, and how it actually affects the youth. The hip-hop music of recent years has been the foundation of many controversial issues and has been illustrated negatively by the media countless times. Issues such as gun and knife crime which has escalated heavily within younger age groups in the last 15 years, especially in the USA and UK and also drug abuse, the use of marijuana being used openly within the younger generations.

Don't use plagiarized sources. Get your custom essay on
“ How Hiphop Has Changed the Youth in Society? ”
Get custom paper
NEW! smart matching with writer

Hip-hop has been accused of influencing the youth to become more misogynistic towards women by constantly having explicit content, such as racist and sexist lyrics in their music. Hip-hip has always been stereotypically associated with violence and black crime. Due to this, older generations have always had an antagonistic outlook on the entire hip-hop genre of music. Although hip-hip music is considered negative in the eyes of many people, there is to consider various questions to have a better understanding and point of view on the controversial issue.

Today we speak, dress and drive what the stars do. Where we shop and eat even the types of homes we buy is dictated by what we “hear” the celebrities are doing. That is a powerful influence over an individual adult but only imagine what type of influence this has over an impressionable pre-teen. Due to the fact that hip-hop/rap music appeals to the thirteen to eighteen year old audiences and the artists performing come from very similar backgrounds of the listeners, rap music is able to control the way that youth think.

Teens and pre-teens are using their part-time job pay check to buy grills (a form of jewellery worn in the mouth) and other types of jewellery and even weapons such as knives and guns are seen as metaphorical fashion accessories for the youth, as these things are incorporated into the lyrics of hip-hop and rap music. What is hip-hop music? In order to understand the hip-hop phenomena one must first create a foundation of knowledge through learning its history. Hip-hop began from a mixture of spoken word poetry, jazz drumming, and jazz instrumentations.

Hip-hop is one of the most popular genres of music out today and has been steadily growing in popularity since its rise in fame from the late 1970s. With the rise of MTV in the early 1980s, early hip-hop music was constantly being shown with TV shows such as ‘Yo! MTV raps’ and since then has been known to be one of music’s most successful art forms and has remained popular to this day. With over forty years of being around, hip-hop has grown and matured and most importantly expanded from its origin of the south Bronx in New York, to worldwide.

The genre and sub culture originated in the early 1970s when a Jamaican immigrant by the name of Clive Campbell aka DJ Kool Herc, first hit the scene in the Bronx. Campbell started DJ-ing his own parties, playing soul, funk as well as R&B records on his turntable set. Herc also brought his know how of the sound system and the popular dancehall/block party scene. Graffiti art had also begun to take shape in the subways of Philadelphia in the mid 1960s. A black teenager by the name of Cornbread began tagging the subways in hopes of attracting a girl he had found feelings for; from this form of youth expression came Graffiti.

Fab 5 Freddy, one of the original DJs of Hip-hop, began an art from known as scratching and popularized DJing. Hip-hop consists of four elements, ‘B-boying’ or also known as break dancing. ‘Djing’, ‘Emceeing’, and street art or more commonly known as ‘graffiti’. Djing, also known as the first element of hip-hop began when disc jockeys created beats on two turntables. The way DJs created their beats was simple yet revolutionary in an essence. The DJs would first find a portion of a song that emphasized a percussive pattern, and then looped a portion of the song to form a rhythmic pattern.

This procedure is now more commonly known as sampling. With the beat or instrumental now developed, the DJ decided the music needed some accompaniment to the music such as singing or poetry. This procedure is known as rapping or Emceeing. From hip-hop spawned the sub-genre ‘Rap’ in the early 1980s. More and more artists became interested in the new form of music out of New York. In 1981, Rap gained a lot of exposure through popular shows such as 20/20 and Saturday night live. The 1990s saw even more change in the hip-hop industry.

Early in the decade, artists fought for permission to sell their albums since most authorities deemed them ‘obscene’ due to the explicit content within the music. A lot which expressed sexual references towards women and talked about the use of drugs. Hip-hop music also spoke strongly about politics and poverty, artists such as Tupac and Public Enemy spoke about such issues. In the 1990s the tension that had been gathering between the west coast ‘Gangsta’ and the East coast artists has exploded and resulted in the shooting deaths of Christopher Wallace and Tupac Shakur.

In the present day Hip-Hop is one of the largest and fastest growing sources of capital and has a great influence on its fans. The roles that Hip-Hop and Hip-Hop artist play in America require responsibility, however, many of the performers and labels take none. By using television and other various sorts of visual media Hip-Hop portrays less than positive stereotypes and all but influences the youth to accept these stereotypes as normal behaviour. The detrimental effect that popular Hip-Hop has doesn’t stop at the visual level. Lyrical content in songs have been dumbed down and filled with violence, sex, and drugs.

For example the song “Hate Being Sober” by Chief Keef condones the use of drugs at all times and gives the impression that it is ok and cool. “While many Hip-Hop songs contain messages about alcohol, tobacco and other drugs, few provide an accurate portrayal of the negative consequences of substance abuse” Negative accusations and harsh criticism has always been an issue for the hip-hop genre of music. Some of these accusations include how hip-hop influences the youth to become more misogynistic towards women by constantly having explicit content, such as racist and sexist lyrics in their music.

Because of this, Hip-hop music has been criticized greatly by the media accusing the music of affecting the youth that sexism and other such forms of oppression are acceptable to society. Although the media has a major impact on how Hip-hop is viewed by the masses, their is some people who view Hip-hop differently. Famous civil rights leader Al Sharpton was asked on what he believed on this particular issue and said, “The hip-hop culture is just like electricity, it can be used negatively or positively. The same electric current that lights up your house can also electrocute you.

It is the misuse of hip-hop culture to attack our women and promote violence. We must encourage the proper use of hip-hop culture. We are all influenced by the hip-hop generation. ” (“Is hip-hop culture,” 2000) On a survey done to twenty-five people in the 17- 60 yrs of age range, twenty people know someone that is exposed to the Hip-hop culture and twenty-one of them believed that Hip-hop isn’t a negative art form. In Figures 1, 2, and 3 show the results from the survey done. On Figure 2, it shows that most of the people surveyed do believe that Hip-hop music has the most influence on the youth.

Rap music generally depicts the lives and souls of many under privileged youths, citing depression and violence during upbringings. The youth of today’s society and in the past, take this music as a way of expression, a way of overruling everything they believe is corrupt and in their own way become corrupt themselves by not caring about the rules. Rap music can be transparently seen as a striking negative influence on today’s youth just by listening to certain songs which praise violence and the use of drugs.

Take rapper Wiz Khalifa for instance. This artist is a prime example of being a huge negative influence to today’s society by the extensive amount of marijuana use, portrayed within his lyrics. The artist mentions marijuana in his songs and speaks about it in a positive way, speaking about the stimulating effects it has on him and almost making the drug sound ‘cool’ to the younger generation, making them think that smoking this drug is cool and acceptable as rapper Wiz Khalifa openly smokes it and mentions it.

The number of drug references in rap music has raised six fold since the genre revolutionised pop music. Researchers who analysed the lyrics of hundreds of songs say rap has been transformed from one which warned against the dangers of drug abuse to one that routinely glorifies it. And because many of the references are coded, many parents are unaware what their children are listening to.

How Hiphop Has Changed the Youth in Society?. (2016, Sep 20). Retrieved from https://studymoose.com/how-hiphop-has-changed-the-youth-in-society-essay 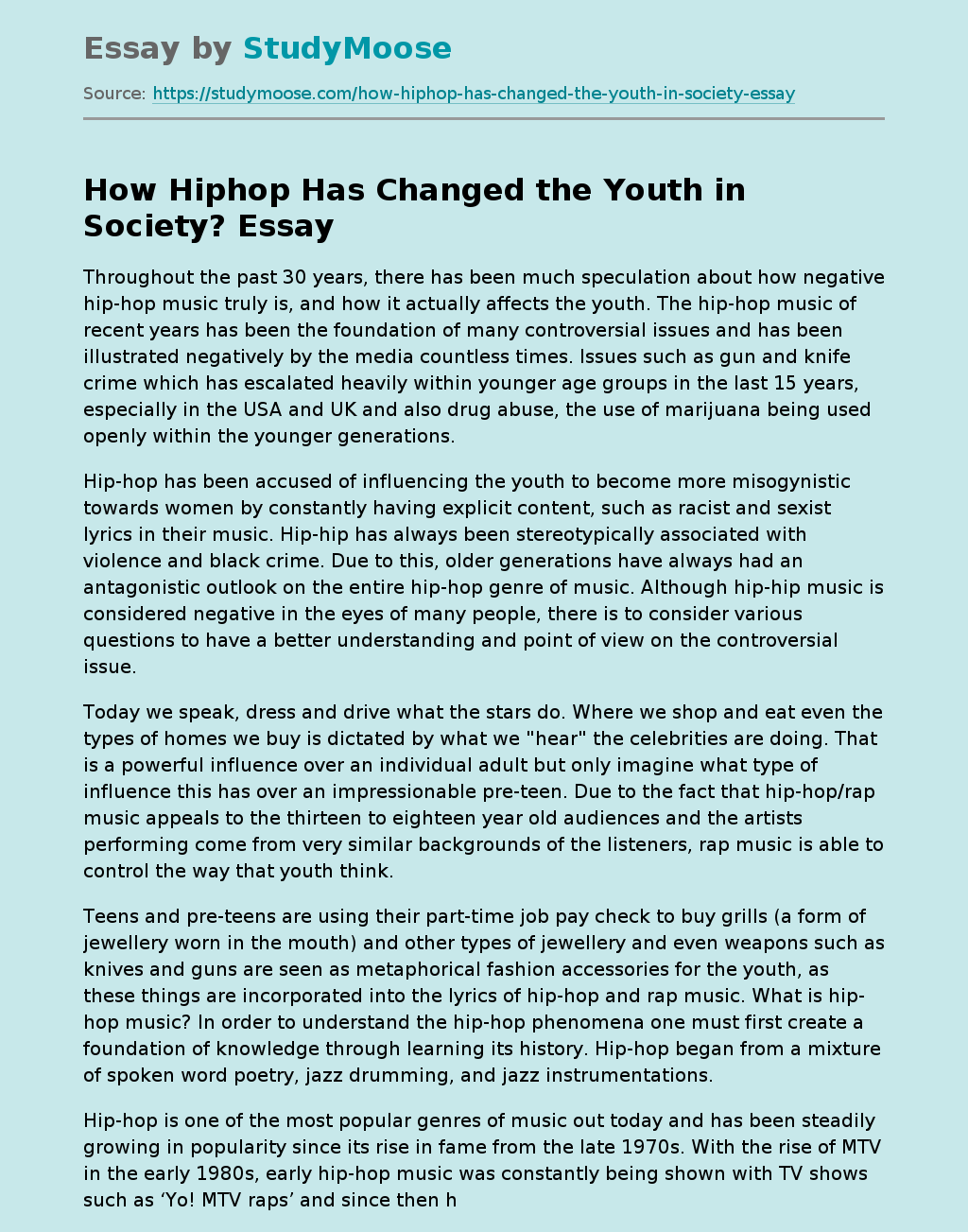