How Has Voting Changed Over Time?

Over time, as America promoted greater civil liberties for all of its citizens, voting rights have also undergone change. When the United States was formed, citizens with voting rights were mainly Caucasian males. African American males that were freed could vote also, but slaves however, were considered property and could not vote. States could administer poll taxes, which often left poorer people without the ability to vote if they couldn’t afford the tax. Women didn’t have voting rights and voters in most states had to be 21 before being able to vote.

Don't use plagiarized sources. Get your custom essay on
“ How Has Voting Changed Over Time? ”
Get custom paper
NEW! smart matching with writer

There are many people that are loosely aware of the difficult battle for votes beginning with the history of the United States. Both major political parties have taken numerous steps toward increasing voter turnout so that more people will participate in this right of all citizens.

For much of American history, voting qualifications were such that very few people actually had the power to vote. These qualifications have changed greatly since then to grant nearly all Americans this important democratic privilege.

In the eighteenth century, the right to vote was reserved for wealthy white males over the age of 21 and in many cases, those that belonged to the accepted religion of their community. The reasoning was that these people were the only ones educated enough to make a wise decision although women, slaves, and those without property certainly had a lot to say on the matters of the day. Today, through Constitutional Amendments, voting restrictions concerning gender, race, religious affiliation, and wealth have all been eliminated.

The minimum age to vote is now 18. All voters must be citizens of the United States.

How Has Voting Changed Over Time?. (2017, Feb 04). Retrieved from https://studymoose.com/how-has-voting-changed-over-time-essay 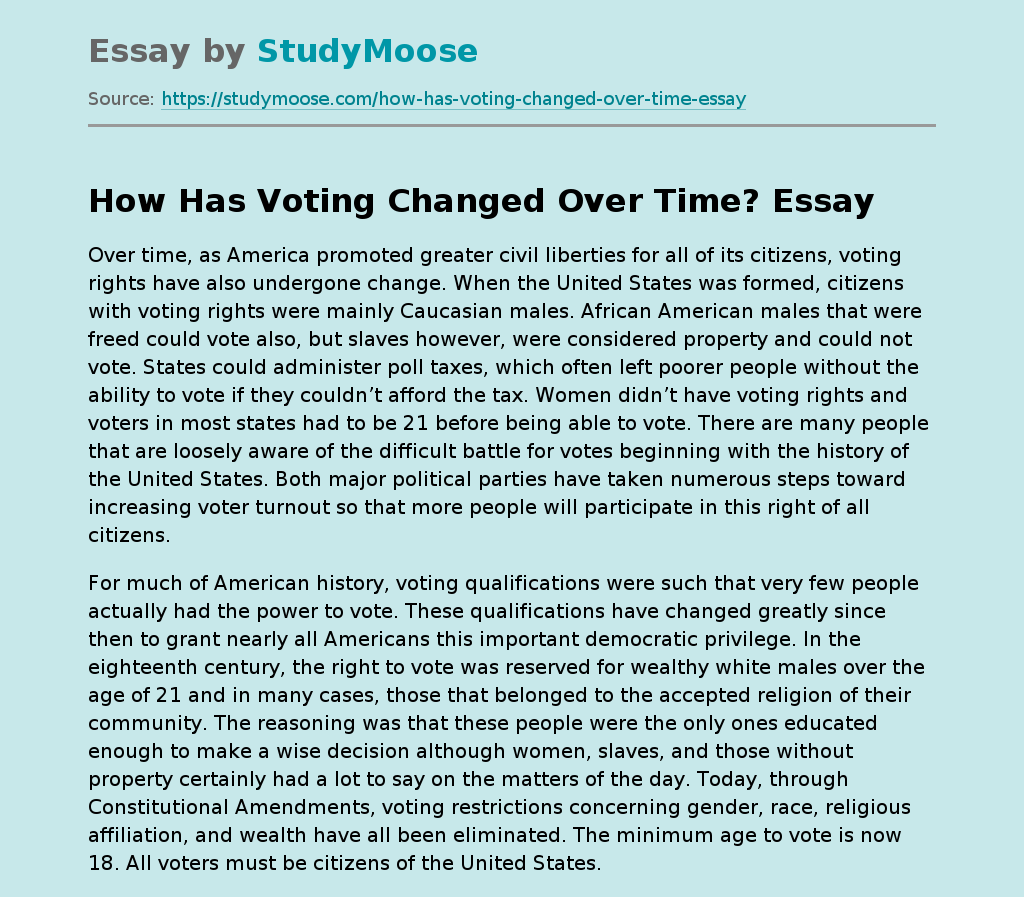