How Fitzgerald Tell the Story in Chapter 1 of the Great Gatsby?

Write about some of the ways Fitzgerald tells the story in chapter 1 The chapter begins with Nick Carraway introducing himself as the narrator. Fitzgerald uses a first-person retrospective narrative, therefore we are given Nicks point of view throughout. The chapter begins with Nick remembering his father’s advice that “all people in this world haven’t had the advantages that [he’s] had” this tells the reader that the main theme of the novel is wealth. The use of the word “advantages” suggests that Nick comes from a wealthy family.

Don't use plagiarized sources. Get your custom essay on
“ How Fitzgerald Tell the Story in Chapter 1 of the Great Gatsby? ”
Get custom paper
NEW! smart matching with writer

Fitzgerald makes Nick claim that “I’m inclined to reserve all judgements” yet quickly contradicts this he tells “the intimate revelations of young men” are “marred by obvious suppressions”, by Fitzgerald doing this, the audience are given an opinion on Nick, realising he is likely to be an unreliable narrator. However when Nick says “I’m inclined to reserve all judgements” the reader may also feel that Nick will give a true and honest account of the events and will not be biased against any of the characters.

Fitzgerald uses this chapter to set the scene of the novel. Fitzgerald makes it clear through Nick’s narration that the events within the novel have already taken place “back from the East last autumn”, the reader instantly knows that we will be given an interpretation of the events and they will all be from Nicks point of view. Nick talks about “Midas and Morgan and Maecenas” all three of these men were renowned for their wealth.

Morgan and Maecenas were real men, whereas Midas’s story is a Greek myth. By mentioning both myth and reality in the first chapter Fitzgerald tells the reader that myth and reality will be mixed throughout the novel. Fitzgerald introduces most of the main characters within this chapter as part of the establishment of the text. Gatsby is the first to be introduced excluding Nick, which could suggest that Gatsby is the protagonist of the novel.

Later on in the chapter we are introduced to Tom, Daisy and Jordan as Nick goes to a dinner party over at East egg. Fitzgerald has Nick use exaggerations of expressions and body language to create an impression of Tom Buchannan and the others in East egg. Fitzgerald has Nick harshly describe Tom as being “arrogant” and powerful “not even the effeminate swank of his riding clothes could hide the enormous power of that body” by using this description Fitzgerald highlights his role as a dominant male, Fitzgerald supports this by the use of direct speech from Tom “I am stronger and more of a man than you are”, this again shows that Tom believes he is above everybody else again re-enforcing his arrogance. Fitzgerald uses oxymoron’s to describe the way in which Tom handles Nick “he turned me around again politely and abruptly” this shows that Nick as a narrator is contradicting himself hence causing the reader to question his narration once again.

Throughout the chapter, Nick uses adverbs such as “accusingly” and “helplessly” when referring to Daisy, allowing Fitzgerald to give the impression that she is dominated by Tom and that they are living in a patriarchal society. This contrast is displayed by Nick’s use of adverbs such as “decisively”, “restlessly” and “crossly” when retelling Tom’s speech, showing Tom’s power. During the dinner where also introduced to myrtle in a way as her phone call interrupts dinner, we also find out about how Jordan talks about her Tom and his family, “Tom’s got some woman in new York”, therefore showing she’s not a very trustworthy character.

Fitzgerald also uses simile’s to add more emphasis to the point he is making “compelled me to the room as though he were moving a checker to another square”, this also shows Tom’s power. towards the end of the chapter Nick witnesses Gatsby standing at the end of his lawn, nick describes the way in which Gatsby held out his arms as “curious” this gives the reader an urge to want to read on and find out what the green light is and what significance it holds in relation to Gatsby. Fitzgerald makes Nick use the word “vanished” at the end of the chapter which give the chapter a more dramatic end.

How Fitzgerald Tell the Story in Chapter 1 of the Great Gatsby?. (2016, Oct 01). Retrieved from http://studymoose.com/how-fitzgerald-tell-the-story-in-chapter-1-of-the-great-gatsby-essay 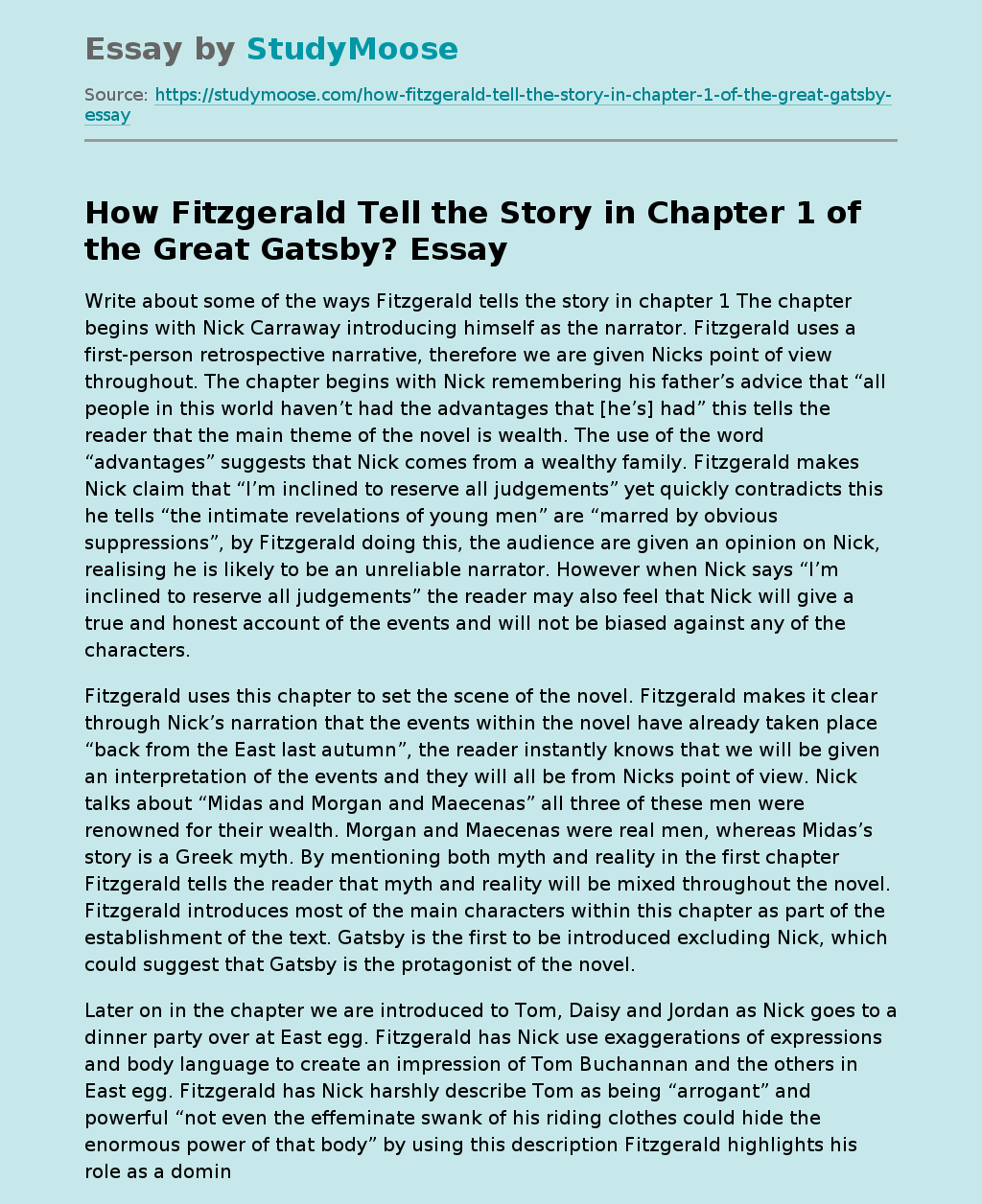