How Far Was the Nuclear Arms Race a Threat to World Peace?

The nuclear arms race did threaten world peace because the weapons being created had the potential to destroy the world, to any nation this comprehension was threatening especially due to these weapons being in control of two countries that ideologically conflicted. Additionally, both superpowers paranoia for one another grew as the power of the weapons created grew and multiplied, this further threatened world peace since any minor movement made by either power could have been misinterpreted as an attack.

However, it becomes clear from a post perspective that the arms race did in fact deter any form of violence between the USA and the USSR, this was due to their fear of mass destruction and that it was more a competition of ability between the two powers rather than a desire to attack their opponent.

Don't use plagiarized sources. Get your custom essay on
“ How Far Was the Nuclear Arms Race a Threat to World Peace? ”
Get custom paper
NEW! smart matching with writer

Although these facts do suggest the arms race wasn’t threatening, the fact that both nations had the capability to destroy the world can be seen as enough for the arms race to have been a threat to world peace.

The Culture of secrecy that developed during the arms race threatened world peace because it fuelled the paranoia consuming each nation as to whether the other had military superiority. The fears concerning both powers led to assumptions being made on the other country’s progress, this is evident with the profound effect the Gaither report of 1957 had on the US. The report which was commissioned just after Sputnik heightened fear that the Soviet Union had military superiority because there was a missile gap between the two nations.

The report led to the US creating a National Defence Education Act in an attempt to reinforce their already extensive military science and defence units, at the time the number of students studying at college doubled (mainly in engineering, maths and science). The impact of the report illustrates US fears of Russia gaining military superiority and if Eisenhower had thought the report to be true, it is questionable how much action might have been taken to prevent Russian military knowledge expanding.

Therefore the culture of secrecy and the ignition of fear it created made the arms race a threat to world peace. Additionally, the concentration of power in the hands of both nations encouraged dangerous tactics to be considered, such as, the US doctrine of ‘massive retaliation’ in 1954. The US was confident at this point of their nuclear superiority over the world and believed that no nation would risk a war against their nuclear based force, it used the method of brinkmanship which involved going to the brink of nuclear war.

Therefore the method was extremely provocative and if used would easily cause further hostility and conflict, especially since the USSR was adopting similar methods. An example of Brinkmanship can be seen in the Cuban Missile crisis 1962 which did arguably come to the brink of nuclear war, it’s an example of how dangerous the method is since if both powers were attempting to use it it wouldn’t have the desired effect of forcing the other country into submission.

Consequently it seems the arms race in the 1950’s had led to over confidence for both nations to be considering such tactics which undoubtedly would have threatened world peace. However, the nuclear arms race did arguably deter both nations from participating in direct conflict due to the threat it would disrupt world peace. This concept of nuclear deterrence arose during the Korean War due to the threat direct conflict posed for not only Korea but the world.

To prevent nuclear escalation procedures were followed such as Stalin not becoming directly involved in the war and Truman not using nuclear weapons against China, since this would lead to Russia having to support China and an indirect nuclear conflict taking place. When evaluating the Cuban Missile Crisis it is evident the effect different concepts and methods have on the outcome of nuclear threat, massive retaliation led to a quarantine in the Cuban crisis, whilst in the Korean war nuclear deterrence led to peaceful existence of both countries in opposition with no nuclear threat present.

But this does show that different methods being interpreted played a key role in the arms race being a threat to world peace and that it wasn’t solely the nuclear arms being created. It is also clear during 1949-62 that the arms race was more of a competition between the two powers, hence ‘race’. Neither concluded any form of destruction or conflict as a result of the arms race, therefore it’s difficult to view the race as a threat.

It is evident that it was simply a competition since it also involved technological and space advances, such as when Sputnik was launched in 1957, US failed in launching their own satellite Vanguard which was seen as a great failure and embarrassment for the US. The Soviet Union seemed to advance with rocket technology and in 1961 Yuri Gagarin in Vostok I became the first man in space, this indicates that particularly for Russia the arms race was not only about military advancements but overall technological advancements.

It illustrates that the arms race was more about being the smartest and most powerful nation rather than bringing about the others destruction and thus being a threat to the world. It appears that the arms race wasn’t only about the destructive weaponry but about the paranoia and the ego of the two powers. Both nations were in fierce competition with the other to be the best super power and this seemed far more important to them than actually attacking the other nation, this is clear due to both countries agreeing to nuclear deterrence and limited war.

Neither country wished to disrupt peace but simply lived in fear of the other country developing a more powerful weapon they could confront the other with, or succeeding them in space technology and thus being the better nation. Although any confrontation that had taken place rarely truly would have led to a nuclear war, there was always a slight threat that even with the most minute misinterpretation a missile could have been fired. This concern combined with the fact both nations did have the capability to destroy the world is enough to conclude that the nuclear arms race was a threat to world peace.

How Far Was the Nuclear Arms Race a Threat to World Peace?. (2016, Sep 16). Retrieved from https://studymoose.com/how-far-was-the-nuclear-arms-race-a-threat-to-world-peace-essay 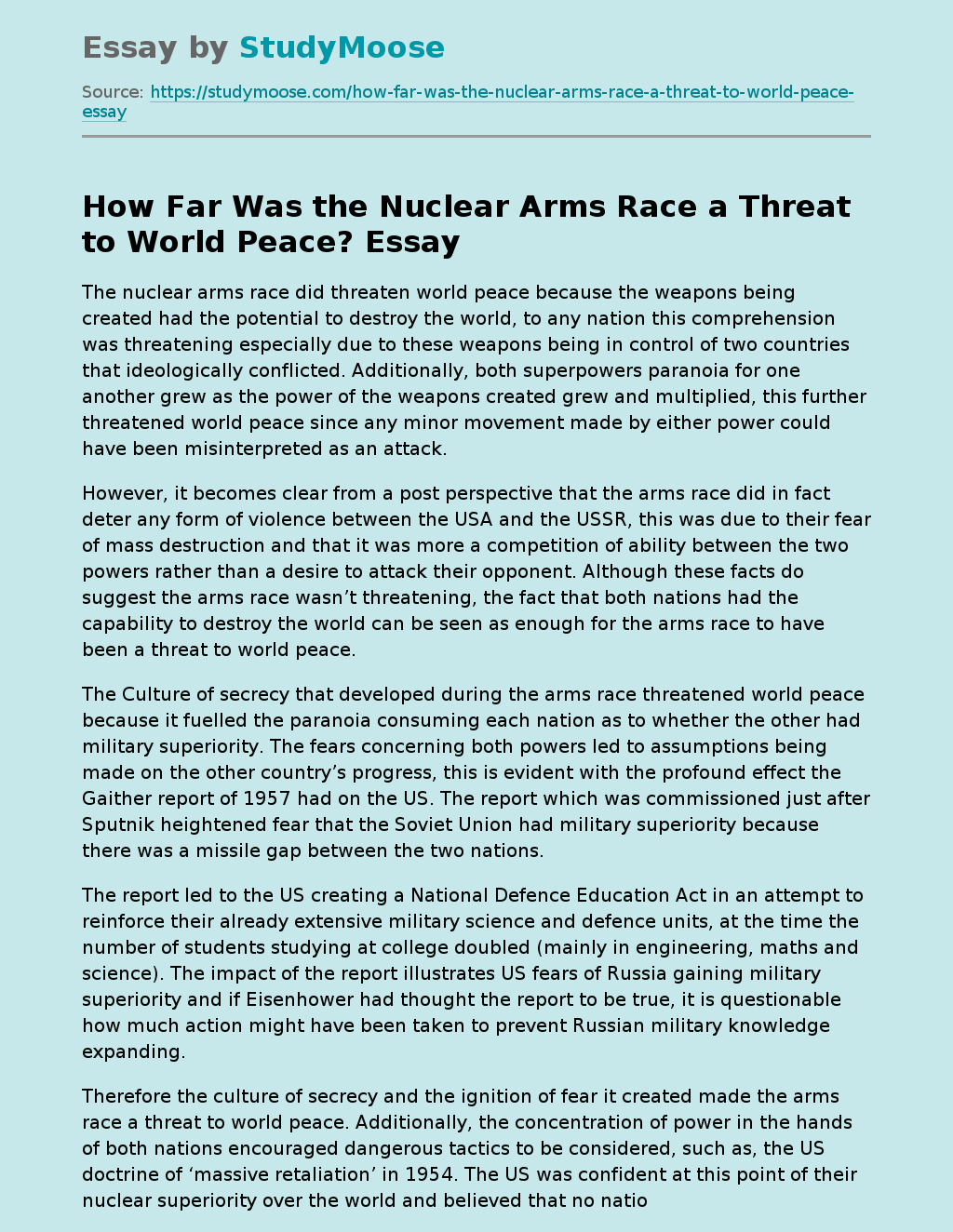