How far was the failure of the general strike due to the actions of the conservative government?

The general strike of May 1926 was not a success for those attempting to force the government to act to prevent wage reductions and worsening conditions for coal miners. Had the TUC been more prepared to strike and followed through with what the miners wanted them to do, the government would have been faced with a much tougher challenge. Despite this, even if the conservative government were faced with a tougher challenge, the preparations and subsequence actions taken by them were more than enough and the main reason for the failure of the strike.

Don't use plagiarized sources. Get your custom essay on
“ How far was the failure of the general strike due to the actions of the conservative government? ”
Get custom paper
NEW! smart matching with writer

Firstly the failure of the strike was due to the conservatives because Baldwin and his government holding emergency powers under the ‘Emergency Powers Act’, which enabled them to set up the Organisation for the Maintenance of Supplies. This organised 100,000 volunteers to be drafted in to help troops by moving essential supplies such as coal from place to place in Britain. Transport services were also kept going by the volunteers meaning that for most people, life was as it was before the strike started.

As a result of this, the impact of the strike was not felt with the devastating effect to Britain that it could well have had but more importantly it kept people happy, which ensured that the government always had the sense of being in control. Baldwin and his government were able to appease the miners by offering them a subsidy in their wages for nine months. These nine months gave the government time to set up the Organisation for the Maintenance of Supplies and prepare for the strike which Baldwin was anticipating.

The subsidy also created time for situation on wages to slightly calm down Generally it can be said that the conservative government had prepared well for the strike and thus as a result had full control over the situation.

They had stockpiled resources, 250,000 special constables were put on hold to be used against strikers and local authorities were told to not give poor relief to strikers. Law and order was maintained almost all the time throughout the strike and violence was kept to a minimum and was well contained when it did break out. Baldwin and his government seemed patriotic which appealed more than the militancy of the strikers, and resisted the more extreme measures proposed by Churchill by turning down the need of the army to control. By doing this, he put faith in the British public, angered few people and thus had control of the situation. Indeed, the Prime Minister Baldwin spoke regularly on radio, and brought up the notion that the strike was a threat to the British constitution and challenged the government.

Especially with the unrest that was being seen around Europe, most people in Britain did not want to see the constitution to be threatened. Vitally, several members of the TUC became worried about this and therefore there was a lack in confidence in the strike and it was not carried through with as much courage that it might otherwise have. As well as this the government referred to the strike as a ‘General Strike’ to create a sense the unions trying to undermine the democratically elected government. They presented the strike as the majority of the population of Britain being undermined by 4,000,000 union members. This didn’t appeal to most people and so they decided to not take part in the strike meaning it wasn’t effective and thus it failed because of the government acting to gain the population on their side by using the idea that the countries democracy was under threat.

Despite the actions that the conservative government took, played the main part in ensuring the strike was a failure, there were also other reasons to why it did not succeed. Most importantly the TUC were not well prepared to strike and when they did, the 90 unions that took part were not fully committed to it. This made life for the government a lot easier than it could well have been if the strike had been that had they all wanted to strike. From the beginning of the strike there was a distinct lack of communication between the TUC and the local striking committees. On occasion such as at Swansea, the messages were so vague and contradictory that the strikers thought that the government were intervening with the messages. There was a lot of confusion during the 9 days and as it wore on the TUC knew that there was a strong chance that they would lose all control. As a result it was almost inevitable that with all the confusion, the strike would fail.

The lack of unions that actually took part in the strike also contributed to its failure to both have an impact and to live up to its name as being a ‘General Strike’. The printers, gas and electricity, transport and railway workers were only some of a limited number of unions that went on strike. This meant that the strike could not have its effect that it was meant to. The fact that the general public didn’t give their support to the strike meant that there was a feeling around the country that what the strikers were doing was pointless. Indeed the way in which the TUC didn’t want to be seen in a violent way also meant that they did not want to be seen as revolutionaries so went into the strike half heartedly and thus it failed. The labour party and the trade unions had a very close relationship with each other.

The trade unions had helped to fund the party. However during the lead up to the strike, the Labour party, led by Ramsey MacDonald, made it clear that they were not supportive of the strike. The relationship between the unions and Labour was especially important to the TUC and they did not want to break the relationship by striking. This meant that they reluctantly went in to strike and therefore the strike did not have the effect that the TUC would have otherwise wanted it to.

The blame can also be put on the daily mail workers who went on strike. Despite the TUC not doing it, they were blamed for it and the negotiations with the government were brought to an end. As well as making it an uphill battle for the TUC. From then on the TUC knew that the longer the strike went on, the worse chance they had of winning and thus it failed In conclusion whilst the fact that the TUC were very badly prepared for the strike and were caught off guard by the Daily Mail workers, the government played the main part in ensuring that the strike didn’t spiral out of control by being well prepared.

Even if the TUC had been more radical with the strike, it is clear that the government were more than well prepared to deal with violence because of the special constables that they had and the Organisation for the Maintenance of Supplies that was ready to step in as volunteers. As a result of the thorough preparation done by Baldwin and his conservative government, the strike was a failure.

How far was the failure of the general strike due to the actions of the conservative government?. (2016, Apr 23). Retrieved from https://studymoose.com/how-far-was-the-failure-of-the-general-strike-due-to-the-actions-of-the-conservative-government-essay 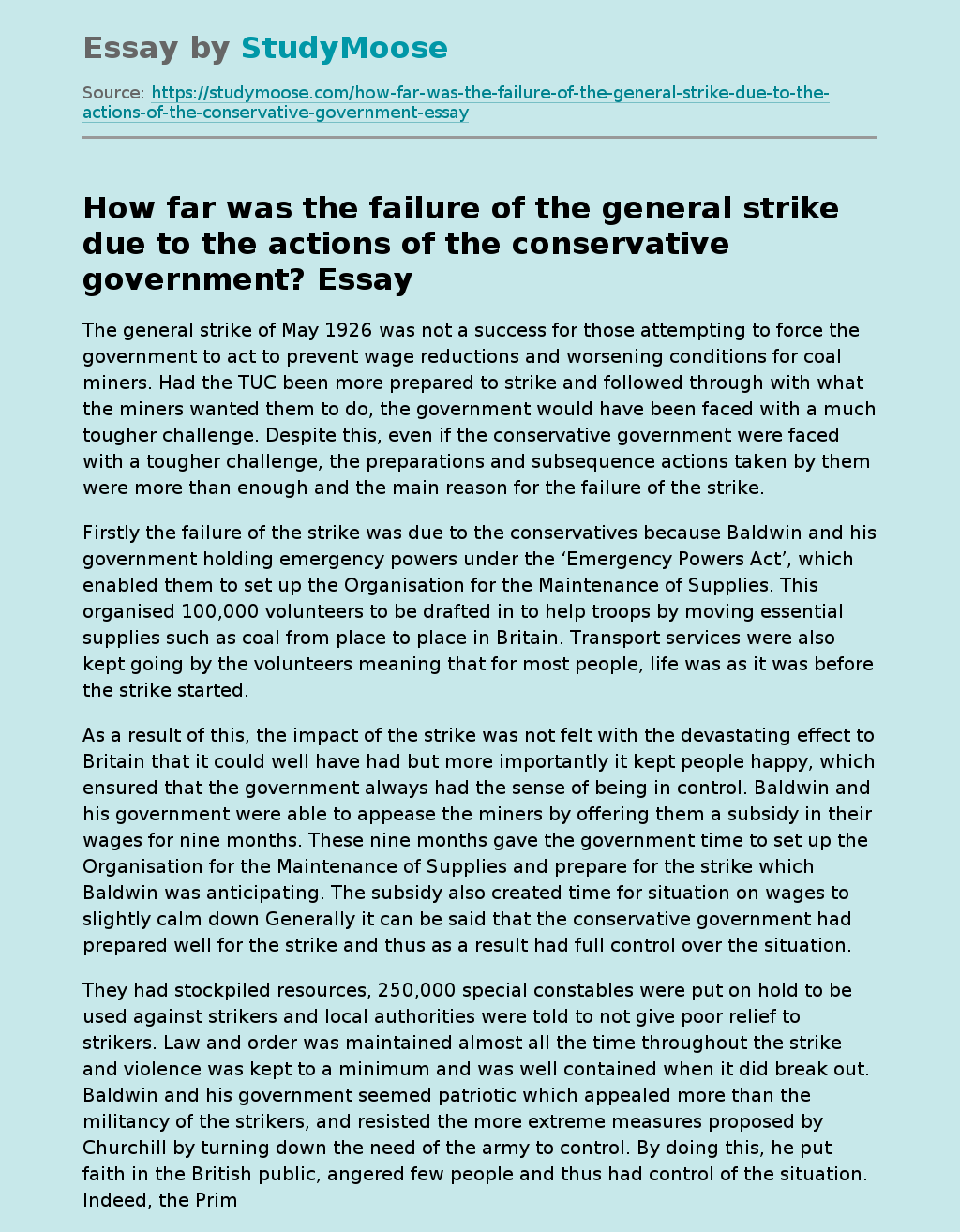